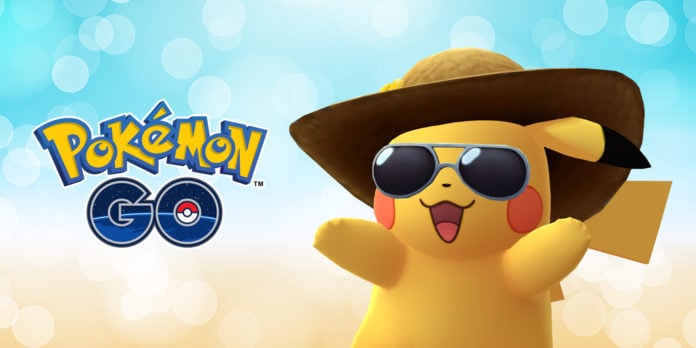 Today, or tomorrow depending on your time zone, is Pokémon Go’s 2nd anniversary! July 6th, 2016 brought the launch of our dearly beloved Augmented Reality game, and it is just continuing to grow! But today, we are not here to gawk at how far the game has come, but instead the announcement of a small-scale event to celebrate Pokémon Go’s 2nd year!

Of course, we have a hat themed Pikachu, but it is not a party hat this time! It will instead be a ‘summer style’ Pikachu featuring a Pikachu with sunglasses and a straw hat! This event will run starting on July 6th, more than likely at 1pm PDT like all event start times and run all the way until July 31st. We hope this extended period of Pikachu takeover will not affect our Community Day, or Pokémon Go Fest spawns!

Hold up, what about that last part? That’s right, carefully woven into the Pikachu announcement, is the sly confirmation of Celebi special research which will be “available globally in the near future”.

We do not yet know if this Pikachu can be shiny, but with the release of the shiny party hat Pikachu, we know it is possible for Niantic to release shiny summer Pikachu. Give it a tan, Niantic, please!!!

Happy 2nd anniversary to Pokémon Go, and we expect many more fun events and happenings for the next year!