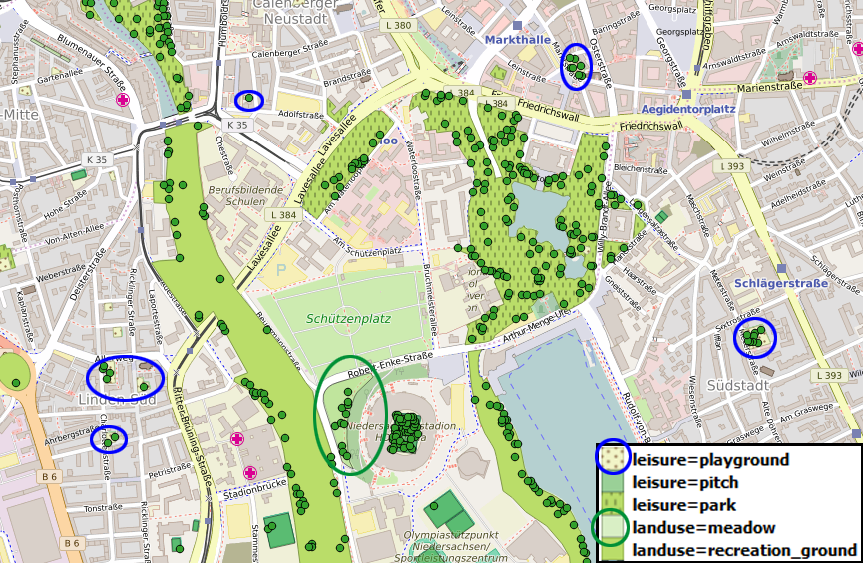 Tr4sHCr4fT, a reddit user has posted a striking discovery that Pokemon GO Spawn points are highly correlated with Open Street Map data. The discovery follows his previous research that showed that “rustling leaves” are almost always found in parks or other green areas.

According to Tr4sHCr4fT, Niantic has been using the open source data provided by Open Street Map to build a map of spawn points. More specifically, they’ve used the landuse property available on OSM (Open Street Map).

Land use is the human use of land. Land use involves the management and modification of natural environment or wilderness into built environment such as fields, pastures, and settlements, also military, leisure and transportation.

Given the provided map, Tr4sHCr4fT showed that spawn points only appear on give landuse areas. The correlation is uncanny and you can observe it on the image below. The fact that OSM data forces certain spawn points and Pokemon biomes to appear is surprising.

For one, it makes easier for data miners and theory crafters to create and speculate on spawn lists, frequencies and types. OSM is open source and data is free to use – Niantic did not break any laws or practices by using this.

For players, using OSM could prove to be useful for finding Pokemon Nests, biomes and spawn points, but there have been no reports yet on the matter.

If you’re interested in a more in depth look at the matter, follow the original thread on TheSilphRoad or go through the official presentation given by Tr4sHCr4fT.

So here is the asked for ELI-NonDev for this thread:
https://www.reddit.com/r/TheSilphRoad/comments/50ni6g/osm_data_spawn_points_relation_confirmed/