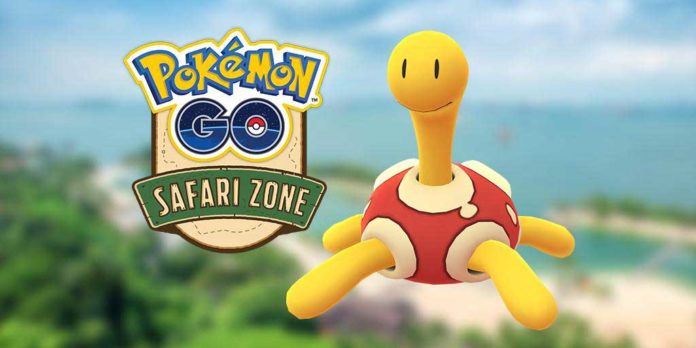 Trainers, in a surprising turn of events, shiny Lapras has been spotted in the wild! Although there is no official confirmation from Niantic yet, players have reported catching shiny Lapras in the following locations:

Lapras is available as a reward from the Win 5 Gym Battles research task, which is the only research task that has Lapras for a reward. Not to be confused with Battle in a gym 5 times which gives Monkey / Machop. See our Field Research List and Rewards: April 2019 for a full list of current Research Tasks.

Lapras isn’t really a useful Pokemon in terms of raids and PvP, but it is widely beloved and we’re sure there will be a ton of players shiny hunting it. No word if this release is worldwide yet, but still, good luck!

But Lapras is not the only new shiny you can start hunting today! Shiny Shuckle has been released worldwide as a part of the Safari Zone: Sentosa celebration mini-event. Although shiny Shuckle will stay around, Shuckle spawns will be boosted only throughout this weekend:

As a way to celebrate our first #PokemonGOSafariZone event in Singapore, Shuckle will be spawning globally from April 20 at 6 a.m. to April 21 at 10 p.m. (local time)! Keep an eye out, and if you’re lucky, you might even encounter something Shiny… ✨😉 pic.twitter.com/TEa8IF0Fas

Another part of the celebration is Shuckle’s return as a Raid Boss! Yes, you read it right, Shuckle is back as a Tier 3 raid boss with merely 3892 CP and with the same mind boggling difficulty. Similarly to last time, you can’t do solo raid Shuckle – you will timeout before managing to knock out Shuckle. A quick look at TTW metric from our simulator reveals that a duo is your only option: