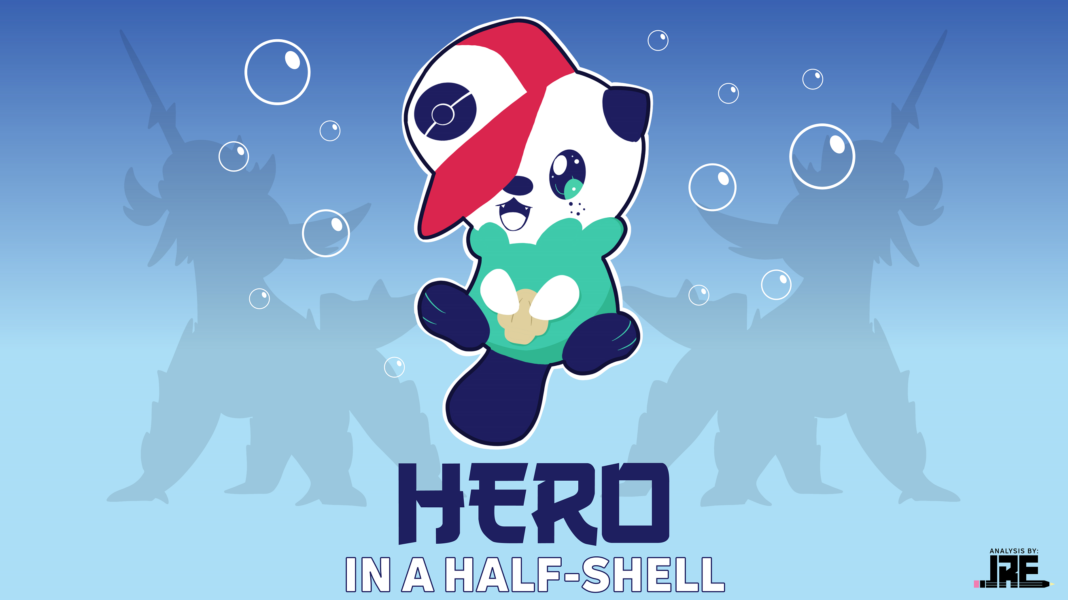 Hello again, fellow travellers and PvPers! As I’ve done many times before (officially starting last April with Abra/Alakazam with Counter), I’m here to take a close look at this month’s Community Day spotlight Pokémon and examine its merits in PvP. And this month, that means the last of the Gen5 starters to receive its own special day. After Serperior got a boost that propelled it into true PvP viability after its Community Day in April, but then Emboar mostly let us all down in July, let’s see how SAMUROTT looks as we put it… under the lights.

First, as always, let’s break down the Pokémon itself…

So Samurott LOOKS tough, with a muscular build that may lead you to think of bulk, but it’s actually the least bulky Water starter we’ve had yet. Blastoise being bulkier is surely no surprise, but Empoleon? Swampert? Feraligatr? Yep, they all outpace Sam in terms of bulkiness. So that’s not great.

Samurott also gets us back to pure Water for the typing for the first time since Gatr in Gen2, with Swampert of course being a Mud Boy, and Empoleon having its infamous Steel subtyping. So while Samurott is not critically weak to Grass like Swampert is (quite the opposite, actually, as we’ll see shortly) or vulnerable to Fighting and Ground damage like Empoleon, it does retain Water’s typical frailness to Grasses and Electrics, while single resisting Water, Ice, Fire, and Steel.

Overall, not an exciting start, but let’s see what else we’ve got!

Two very different ways to trick out your Samurott. First is Waterfall, with its high damage (and STAB on top of that) and slightly below average energy generation. But much more unique among Water starters is the option of Fury Cutter. Not only does this represent higher energy generation than any Water fast move (the highest currently being Bubble and its 3.67 EPT… which is actually the ONLY Water fast move with higher than 3.0 EPT), but it comes in a desirable typing: Bug, which deals at least neutral damage to everything that resists Water (Dragons and other Waters) and super effective damage to Water’s most notorious nemesis: Grass types.

But can it capitalize on that unique advantage and find a way to stand out from other Water starters? Well to answer that, we need to include the charge moves in the picture…

So the exclusive move that you can only get during Community Day hours (and up to two hours after), surprising absolutely no one at this point, is of course Hydro Cannon. It’s actually the least potent of the “starter pack” of Community Day moves (Frenzy Plant deals 100 damage for 45 energy, and Blast Burn a whopping 110 for 50 energy), and has the lowest Damage Per Energy (DPE) of the three at “only” 2.00 (FP is 2.22 DPE, and BB at 2.20 DPE)… but make no mistake: Hydro Cannon is a disgustingly good move that greatly elevates the performance of anything blessed enough to have it.

And in Samurott’s case specifically, it’s especially a blessing thanks to coming in at a full 15 energy cheaper than any other charge move Sam has had to date. That means it instantly becomes not just a source of solid damage when it connects, but Samurott’s first true “bait” move as well, much like with Swampert where sometimes it wants to go straight Cannon, and other times what it really wants it to snag a shield with Cannon and then close things out with a big Earthquake or Sludge Wave.

Samurott doesn’t come with either of those, but it DOES have a trio of big closing moves of its own. Hydro Pump* deals massive, usually KO damage, but obviously offers no coverage. Blizzard actually deals more damage on paper, but in practice, Pump deals 10+ more damage due to having the STAB (Same Type Attack Bonus) multiplier… but of course, Blizzard offers very good coverage as well, especially against Grasses, though both it and Sam’s Water moves are resisted by opposing Waters. But just as Fury Cutter has good advantages when paired with Water, so too does Megahorn, a Bug move which — as a reminder — hits everything Water does not for neutral (Dragons, Waters) or super effective (Grasses) damage. It is also Samurott’s most energy-efficient closing move, having the same damage to energy ratio (2.0) as Hydro Cannon, and coming 20 energy cheaper than Blizzard or Pump. Outside of perhaps certain limited metas down the road, Megahorn is the closing move you want to run on Samurott.

So operating under that premise, let’s see what the numbers show. Here is Samurott’s best pre-Hydro Cannon in Great League and in Ultra League, just to set our barometer. Pretty awful, right? Well, I am very happy to report that Hydro Cannon does offer a VAST improvement. By running Megahorn and Hydro Cannon, here’s what happens:

Moving up to Ultra League now…

So overall… well, I think we can at least label Samurott as spicy now, as opposed to a complete joke before. What you can do to help it a little further long during Community Day is find ones with really good PvP IVs, as then it has the potential to flip things like Registeel and Cresselia in Great League and stuff like Scrafty, Politoed, and Bronzong in Ultra League. Not vastly better, but hey, every little bit helps!

But we’re also not quite done… Samurott is actually getting access to TWO new charge moves this weekend. Hydro Cannon is a Community Day exclusive, but remaining in its movepool afterwards is brand-new-to-GO move Razor Shell. Unlike Hydro Cannon, this is purely a bait move, dealing only 35 damage for the same amount of energy. Its one advantage is coming with a 50% chance of slashing the opponent’s Defense, just as the move is known for in other Pokémon games. But uh… Hydro Cannon is only 5 additional energy and can deal an extra 45 damage in the here and now rather than hoping to deal more damage (by maybe reducing the opponent’s Defense) later. You really don’t want it with Fury Cutter, as its high energy gains are best applied to charging up big closing moves rather than spamming an underpowered move like Razor Shell, but even with slower charging, higher damage Waterfall, which better appreciates spammy moves and likes the idea of reduced Defense for the enemy, it just doesn’t work. And don’t even get me started on Ultra League…. 😬

I’ve been excited about Samurott’s potential for a long time… but I had a bad feeling that even post-Community Day, it would remain more on the fringe than at the core of any PvP metas. And lo and behold, even with Hydro Cannon AND the recent buff to Megahorn, if I’m being honest, it remains more curiosity than an exciting new Water option. Still, its ability to beat up on Umbreon and Psychics, turn the tables on several Grasses, and outrace a number of other big names will mean something at some point, I’m almost sure of it. Open formats may not be ideal, but Samurott’s unique profile will give it play with the right meta around it, and it didn’t have even that much going for it until now.

And thus continues a recent run of mostly unexciting Community Days, with fellow Unova starter Emboar with Blast Burn being just a bore, and Altaria being barely better than before, and upcoming Dusknoir looking like a very poor man’s Cofagrigus. (But you know I’ll still be breaking that down anyway when the time comes. 😉)

But before I let you go, let’s do a little speculating with Razor Shell for a minute, because it’s hardly exclusive to Samurott and family in MLG. Does it help any of its other potential recipients)? Let’s see!

So once again (bonus TL;DR!), the quick summary on Samurott… get good ones with Hydro Cannon for Great League and Ultra League, as it’s a viable-ish Water-type that does a great job threatening Psychics and Darks and can be a legit anti-Grass counter too. It’s still behind most other Water starters but has some nice niches. Don’t worry about Razor Shell for it though… Hydro Cannon is much more worth it for just 5 extra energy.

(Photo credit for the sweet header image to DarthRaae. Thanks for another winner!)