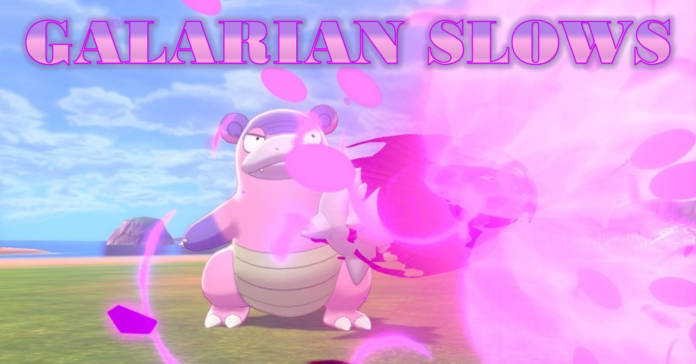 The “Under The Lights” article series provides some deeper dives on Pokémon of particular interest in PvP. Today, that’s going to be a couple brand new arrivals in Pokémon GO, taking full advantage of some recent move buffs to come out swinging!

Today, we put the Galarian Slowpoke family… under the lights.

Before we get to the moves, we’re going to start the analysis as I always do: with a look at the stats and typing.

Stats-wise, G-Bro is rather average, with Attack and overall bulk roughly equivalent to Swampert, Vigoroth, Drifblim, and Clefable. But of course, it operates quite differently than any of them, and it starts with the completely unique pairing of the Poison and Psychic typings. There’s actually a decent among of overlap here, with Psychic negating the famous Poison weakness to Psychic damage, Poison negating the typical Psychic weakness to Bug, and with both resisting Fighting damage, G-Bro double resists Fighting, which is handy.

The rest of its resultant resistances come from its Poison side — Fairy, Grass, and Poison — and it is left vulnerable to Ground, Dark, and Ghost, thankfully with no killer double weaknesses. In short, its still weak to the primary foes of Psychic while gaining some handy resistances from being Poison.

Now which side does it lean on more for offense, I wonder…?

So we keep Confusion from Original Recipe Slowbro, but here I think it is not the ideal way to go. I believe you want the newly buffed Poison Jab for the energy it generates and the many targets that it maims. You’ll see what I mean when we mix in the charge moves….

So unfortunately, as with regular Slowbro, the charge moves are a little slow and clunky… but this is still a much better place to be. Remember that regular Bro is stuck with two fast moves that generate only 3.0 Energy Per Turn. G-Bro, on the other hand, has Poison Jab and its 3.5 EPT, so already an improvement there. But there’s also this: regular Bro’s cheapest charge moves (Ice Beam and Psychic) both cost 55 energy, but G-Bro has Sludge Bomb for 5 energy less.

Let’s start right there, actually. With JUST the Poison moves, G-Bro already puts up respectable numbers, wiping away Charmers, Azumarill, Fighters, most Grasses, and — unlike other Poison types — holds up against other Psychics too, beating Defense Deoxys and Cresselia head to head, and fighting Hypno to a standstill as well.

But of course, that’s just the start. What does a second move bring to the table?

One might be tempted to roll with Psychic (the move) for double STAB, for two affordable charge moves, and for coverage. But actually, Psychic only adds on one new win (against Lapras). Instead, I think the move you want is actually the non-STAB and very expensive Focus Blast. With that, you still beat Lapras, as well as Dewgong, Bastiodon, Registeel, Ferrothorn, Pidgeot (and yes, Blast finishes the job there too), and even Umbreon!

Psychic/Blast kinda works too, but loses out to PowderTales (where Sludge Bomb is super effective) and Obstagoon (who resists Psychic), and Umbreon and Pidgeot (where the 5 extra energy of Psychic (the move) over Sludge Bomb makes all the difference.

There IS more of case for Psychic with shields down, where it beats Nidoqueen and Pelipper, but even there Sludge Bomb breaks even by instead beating Cresselia and Azumarill. Overall, I really do think the advantage goes to Bomb/Blast as the set to run with in Great League, providing great Poison coverage that can also stand up to Psychics and even the toughest Steels which are usually a big problem for Poison AND Psychic types.

But Slowbro (the original) really hasn’t made much of a splash in Great League. If you’ve ever seen one in GBL, it has likely been in Ultra, and Premier Cup especially. So what if I told you that Galarian Slowbro very nearly doubles the win record of OG Slowbro?

With Sludge Bomb and Focus Blast (powered out by Poison Jab) again, Galarian Slowbro can again take out all the main Grasses and Fighters (Celebi, PuP/Shadow Ball Lucario, and Payback Machamp being the only notable exceptions, and even they only win with a successful bait), every single Fairy, and stuff like Lapras, Kingdra, Ampharos, Galvantula, Escavalier, Crustle, Dragonite, and Obstagoon.

Even in Open Ultra League, G-Bro holds its own, managing to overcome Melmetal and usually Cresselia in addition to all the other good things it can do at UL level. Yes, it DOES require XL Candy, but that is, for the most part, the name of the game in Ultra League anymore. (I’ll… uh… withhold any further comment there. 🙃)

One quick note on IVs. For now, we can only acquire Galarian Slowpoke (and therefore, Galarian Slowbro) by raiding or research… or by trading. So while it is very much possible to acquire via trade a G-Bro with nearly any IVs (though not the very best of the best, more than likely, with their 0, 1, or 2 Attack), I do want to point out that it can still perform the same in Great League with raid-level IVs, and in Ultra League Premier the only win it may miss out on is Crustle. Otherwise, don’t fret too much about trading for a fantastic IV one… it seems rather forgiving in terms of IVs, thankfully.

Galarian Slowbro seems to have a lot more potential in PvP than does its Kantonian, hero-in-a-halfshell cousin, and it’s mostly thanks to the improved Poison Jab. Its recent buff to being the only fast move in the game (other than the busted Counter) with over 3.0 DPT and EPT came just in time to make G-Bro’s arrival pretty exciting!

It would have been nice if it had one slightly spammier charge move, but it makes due with what it’s got and should have an impact on the Great League and Ultra Premier Cup metas anyway, and is certain to be interesting in limited Cup formats down the road.

I do want to take a few brief minutes to look at the other Galarian Slows, though….

First we have GALARIAN SLOWPOKE. Yes, it has to be completely maxed to Level 50 to really even consider in Great League, and even then it maxes out below 1400 CP, but hey, I know players who have maxed out regular Slowpoke for PvP use, and it’s in the same boat and doesn’t perform as well as G-Poke.

Why? They have the exact same stats, so that can’t be it. Both have Confusion/Psyshock (no Poison Jab option here, sadly). Both are Psychic types… ah, well our first difference is that Kanto Slowpoke has a secondary Water typing, while Galarian Poke is pure Psychic. But still, what else…? Ah, there we go.

While Kanto Poke has the truly awful Water Pulse (60 energy for only 70 damage 🤢) for coverage (or Return, if purified), G-Poke has the much better Surf (40 energy for 65 damage). And in fact, it’s actually best running without Psyshock at all, but instead pairing [Surf with Psychic. Still not a fantastic record, but hey, at least it doesn’t get shredded by Grasses or Electrics like its Kantoian predecessor.

I don’t recommend maxing out either Poke, personally, but at least now you’re informed if that’s your kind of spice.

Perhaps more interesting (and certainly far cheaper) is the member of the trio that is being held back for the moment, but presumably isn’t too far down the road: GALARIAN SLOWKING.

It also has the same Poison/Psychic typing as G-Slowbro, so the same resistances and vulnerabilities are at play there. The main difference comes down the moves, and for the most part it looks like King gets the short end of the stick….

Rather than Poison Jab, Slowking is stuck with the mediocre Acid (3.0 DPT, 2.5 EPT) as its Poison fast move. Normally I’d say there may be hope of that getting buffed, but seeing as how Poisons’s other two fast moves (Jab and Poison Sting) just got buffed and Acid didn’t, I don’t see it changing any time soon, so it’s a non-starter.

That leaves us again with Confusion, or the unusual option of Hex. The former obviously deals big damage (plus STAB) with average energy gains, but the latter has a very nice 4.0 Energy Per Turn value. Good thing too, because here are Galarian Slowking’s charge moves:

Yeah, Slowking’s moves are not cheap. The only one that costs less than 65 energy is Shadow Ball, and yes, it’s a great move, but it lacks STAB. I got a bad feeling about this….

Let’s start with Hex, which you would presume is its best, right? Actually, no… that distinction still belongs to the original Confusion, which does everything Hex can do except outrace Alolan Marowak and Melmetal, more than compensating by adding on wins versus Dewgong, Toxicroak, Haunter, Vigoroth, and Stunfisk. It’s still not a GREAT performance, but at least it does manage to still beat Azumarill, Bastiodon (yes, really… just drops a bunch of Shadow Balls on top of Bastie until it’s dead), and hold off most of the Grasses, Fighters, and Fairies still.

Unfortunately, in Ultra League, while G-King is much cheaper to get into fighting shape than G-Bro (no XLs required this time!), the King is more like the peasant at this level. It doesn’t have the bulk to stand up to the Giratinas or Gengar or even most Psychics with Hex/Shadow Ball, and with Confusion it just has awkward movesets that don’t fit the meta particularly well. Shame.

I’d still hold a good G-Poke back for a future King if you can — it COULD always get tweaked charge moves before it’s released — but for now I think you can invest in G-Bro instead and likely will not regret it later.

Alright, that’s it! For those who skipped here to the end, here is your TL;DR:

And that’s all for today! Until next time, you can always find me on Twitter with near-daily PvP analysis nuggets or Patreon with its tie-in Discord server you can access to get straight through to me for personalized answers to your questions.

Thanks for your faithful readership, Pokéfriends… I appreciate your attention and encouragement. Catch you next time, and good luck grinding for some good Slows!