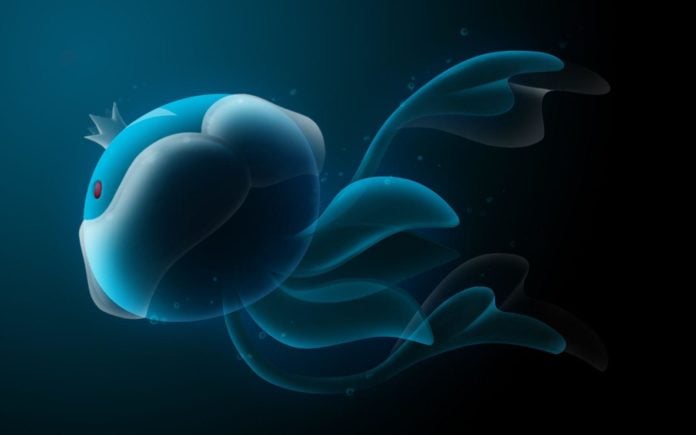 Hello again, my friends. You may have noticed that, in my lengthy analysis of last week’s PvP move shakeup, I did not really go into any detail on the new Pokémon that was added to the game at that time. Today, I remedy that. Because today, the time has come to put Jellicent…under the lights!

Before we get into it, my standard disclaimer: my analysis is strictly from a PvP usability standpoint. So while I imagine Jellicent may have at least some use in raids and PvE, I’m just a PvP guy, so that’s what I’ll be focusing on here.

But enough about that. Let’s get to it!

So before we get to anything else, the odd and truly unique type combination. Water and Ghost go together like… well, water and oil. There is absolutely zero relation between them… no resistances or vulnerabilities they cancel out for each other.

Therefore, Jellicent has all the resistances and vulnerabilities of each typing… it is weak to Grass and Electric on its Water side, and weak to Dark and Ghost on its Ghost side, and resists Water, Fire, Steel, and Ice (Water), and also Bug and Poison and double resistances to Fighting and Normal (Ghost). The upside to having two typing with no crossover like this is: no double vulnerabilities. Hurrah!

In terms of stats, JelliBelli has Attack equal to Whiscash… and therefore, the same bulk as Cash as well. In terms of Ultra League comparisons, at Level 40 it is roughly equivalent in Attack/bulk to Lapras, Ferrothorn, Armored Mewtwo, and Level 50 Skarmory, and bulkier than known thick Pokémon like Obstagoon, Drifblim, Poliwrath, and all the Charmers (even Level 50 Clefable).

Pushed up to Level 50, Jellicent gets within less than 5 Defense and HP of Altered Giratina, which is no small thing! It may have an undesirable listing of vulnerabilities, but make no mistake about it… Jellicent is a TANK. It has just the kind of stats you like to see in PvP.

But that doesn’t amount to much if JelliBelli doesn’t have the moves to make it a PvP weapon. Thankfully, it does. In fact, every single one of its moves is viable in the right configurations!

While it was just recently nerfed, Bubble is still a fine PvP move, sitting just below 3.0 DPT/4.0 EPT slow moves Volt Switch and Incinerate, and basically on the same level as 2.5 DPT/3.5 EPT moves like Wing Attack and Quick Attack. It’s not on the same great level it was pre-nerf, but it’s still quite competitive in PvP.

And then there’s Hex, which saw a buff back in GBL Season 3 (in late July), and is also on roughly the same level as Bubble (0.33 less damage, but 0.33 more energy gain to counterbalance). Whereas Bubble was probably the clear favorite pre-nerf (and more on what difference that nerf made to Jellicent specifically shortly), now they are both on pretty equal ground, and as you’ll see, what meta you’re facing may determine which move pulls ahead.

You know, it’s almost refreshing having only three charge moves to talk about. There is a steadily decreasing number of PvP Pokémon that have less than four or five these days!

But that doesn’t mean this will be an “easy” discussion. In fact, you could argue that any one of Jellicent’s twelve possible move combinations are viable.

I fact, let’s start right there. What can each of these moves do by themselves? Starting in Great League….

So what have we learned so far? Generally, Bubble is the better fast move with any of these charge moves by themselves… the only place Hex even breaks even is with Ice Beam, which is the weakest charge move on its own anyway. Bubble Beam surprisingly outperforms Ice Beam overall, and not shockingly, Shadow Ball looks to be the best move on its own in a vacuum.

Let’s start there by combining the best results from above Bubble/Bubble Beam/Shadow Ball. Not surprisingly, it beats everything Bubble/BB and Bubble/Ball could, in addition to Froslass and Whiscash by baiting a shield with Bubble Beam and then finishing them off with a follow-up Shadow Ball.

Ready for a surprise, though? Somehow, even though Hex sims worse than Bubble with Shadow Ball AND Bubble Beam, when you put them all together, Hex/Bubble Beam/Shadow Ball actually outperforms Bubble now! What the heck is going on here? Well you see, it’s ♫ all about those baits, ’bout those baits. (🎼 No treble!) Sorry, too much Meghan Trainor coming from my daughter’s room.

ANYway, it really IS all about those baits, because with a successful Bubble Beam shield bait and then landing a Shadow Ball, Hex is able to outrace Drifblim, Cresselia, and even Galvantula, and of course wins the mirror match against any Jellicent that doesn’t do the same.

The downside is that it can no longer beat Diggersby, and while it shows a loss to Vigoroth as well, we already know that the way to play (and win!) that is to just spam Bubble Beam… meaning that, in actuality, the super close win Bubble gets with Diggersby is the ONLY thing that it can beat that Hex/BB/SB cannot. Neat! Well, assuming you get your baits, of course….

And yes, Ice Beam is worse, as before but hangs in there well enough that it MAY be the better move in certain limited metas down the line. This is especially true when combined with Hex, actually showing the second-best results of all combinations behind only the Hex/Bubble Beam/Shadow Ball we just looked at. Ice Beam cannot bring down Dewgong, Lapras, Galvantula, or Cresselia, but with BB baits and either fast move, it does much more effectively slay Diggersby, and both beat Shiftry too!

That last one is the start of a trend, as with Hex driving things along, Ice Beam (again, assuming BB bait(s)) is capable of outracing Grass types Chesnaught, Tropius with either fast move, and even Venusaur! Hex/BB is also the only combo with Ice Beam that can still beat Froslass, Drifblim, (Shadow) Hypno, and astounding, still beats Azumarill!

In that last one, turns out that in a battle of tanks that deal lots of resisted damage to each other, having the one move (Hex) that is NOT resisted and being able to nerf the opponent with Bubble Beams save the day for JelliBelli. So while Bubble/BB/IB doesn’t look too hot, Hex with those charge moves is a little weaker overall than Shadow Ball, but covers its hide very effectively in a manner similar to Drifblim with Icy Wind.

So there we have it: Jellicent will definitely be a player in Great League. But uh… how about Ultra League? Does JelliBelli have play there? The short answer is: yes, absolutely! How much, though, remains to be seen…

…right now! I wasn’t gonna make you wait for it… that would just be mean.

So let’s start with where we ended Great League: Hex/Bubble Beam/Ice Beam. And it’s not half bad! Still beats Regi and Fighters, beats Cresselia and the Charmers, beats Fire (Charizard), beats Armored Mewtwo, beats Esvacalier and Scizor, even beats regular and Shadow Dragonite… oh, and this other little Dragon called Altered Giratina (well, with Dragon Breath, anyway). Not too shabby.

But it can get better. Check it out with Shadow Ball rather than Ice Beam. You do lose not to Dragonite (though you still beat the Shadow version), and gain Lapras, Empoleon, Articuno, Melmetal, and Drifblim, and gets much easier wins than Ice Beam against Cresselia, Poliwrath, Machamp, Gallade, and Slowbro (in Premier Cup for that last one), generally with 50+ more HP left over (even 100+ in the case of Bro). And yes, it holds Giratina-A and the others, and in every case but Togekiss, with more HP left than it has with Ice Beam.

So there we have it… I think Hex/Bubble Beam/Shadow Ball is your overall favorite in Great AND Ultra Leagues, with Hex/BB/Ice Beam coming up second.

Is there any hope for Bubble sets? Ehhhhhh. Bubble/BB/IB has little spice, again beating Dragonite and the one unique win it gets that Hex (and Bubble/BB/SB) cannot: Obstagoon. But otherwise it’s just a sizeable step backwards, failing to beat Giratina, Cresselia, Gallade, Armored Mewtwo and several others. Bubble/BB/SB is much better, re-gaining Gallade and Cress and A-Mewtwo, as well as Lapras, Melmetal, Articuno, and Empoleon (just as Hex-driven Shadow Ball could), though it still has no real shot at Giratina-A, which is a big name and big difference between Hex and Bubble sets in Ultra.

So again, to reconfirm, it looks like Hex/Bubble Beam/Shadow Ball reigns supreme overall, though Hex/BB/IB and Bubble/BB/SB do enough good to certainly be worth consideration as well and may pull ahead depending on the team composition around them.

Before we close, one more thing to cover. The above Ultra League discussion was all centered on Level 40 Jelli, which pegs out at 2338 CP (at best). What about a for-now-theoretical Level 40+ Jellicent?

XL candy is basically impossible to come by so far, so good luck pushing any Jellicent over Level 41 for a while (though we’ll look at even that in a second), but you COULD rush to best buddy a Jellicent and get it to 41, at least. I checked things over, and Shadow Ball sets don’t really see any changes from 40 to 41. However, a Level 41 Hex/BB/IB Jelli does pick up one meta win, at least: Empoleon. So that’s nice.

One day, presumably, we’ll be able to get Frillish XL candy and push our Jellicents beyond Level 41. And when that day arrives, yes, it could be very sweet. For the record, that list now includes Swampert, Dragonite, and Origin Giratina. Giddyup.

Alright, thus concludes our look into the new Jellicent! As always, I hope this was helpful to you and lets you know what to do with your own JelliBelli, or at least know what to expect when you inevitably face one down on the opposing team! Good luck.

For more PvP tidbits, you can find me on Twitter for near-daily PvP analysis nuggets, or Patreon if you’re into that sort of thing. And please, feel free to comment here with your own thoughts or questions and I’ll try to get back to you!