Wayfarer for Pokémon GO and Ingress was announced way back in October 2019, and it has been an amazing tool for us players to be able to improve our local areas via additional PokéStops and Gyms. It allows us to submit points of interest for new PokéStops, but there are definitely ways it could be improved upon that we talk about here. Thanks to Wayfarer my small village has gone from no gyms and only 2 PokéStops, to an area with 6 gyms and 8 PokéStops! It has been a huge help for smaller towns and rural areas, and it totally revolutionised game play. Sadly today I’m here to talk about a big issue in Wayfarer, and that is abuse within the system.

Speaking from my own experience, I’ve reviewed over two thousand submissions, and yet, my Wayfarer badge in Pokémon GO is stuck on 1082 reviews. Why is it stuck like that? Because my ‘Wayfinder rating’ is ‘poor’. 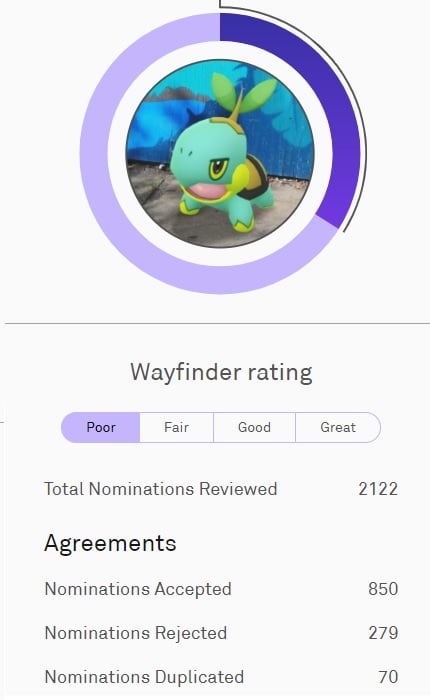 Why is it on ‘poor’? Honestly, I have no idea! I follow all the rules for submissions, I check locations for every submission, search for further info on submissions I’m not sure on, and make sure I’m being fair. But it appears that my version of the rules, and other reviewers versions of the rules, are two different things. I used to review a lot, but since my rating dropped to poor I’ve felt disheartened because it feels like I’m doing one thing, and other reviewers are doing something entirely different. I really try hard to stick to the official guidelines, so for my rating to be poor, does that mean others aren’t following them at all? Or do Niantic need to make their rules more clear?

I’ve always tried to give feedback to any submissions I’ve rejected and encourage resubmissions where possible, wrongly believing that the section for this is actually sent to the person who submitted the POI. Nope! It goes absolutely nowhere thanks to people being abusive through it, so I’ve been talking into the void. For example, when it has been a poor photo that has led to the rejection, I’ve asked for the submitter to resubmit the point of interest, but to take a photo in good daylight instead as it should be accepted then. Feedback is awesome and helps us all understand what we are doing wrong. Why can’t we give any sort of feedback, even if limited? For example, when you select ‘poor photo quality’, also get an option to tick a box that says ‘night time photo’ or ‘poor cropping’.

I’d love to know why my rating is ‘poor’, and how often my review of a submission doesn’t match with others, in order to figure out where I’m going wrong, or abuses of the system are taking place.

The major issue a lot of folks have with Wayfarer is good, rule following submissions, being rejected for ridiculous reasons. Looking through my own submissions, here’s a few of the types of points of interest I’ve had rejected, and their reasons why:

As you can see, the rejection reasons really don’t make sense! None were rejected for a reason like a poor quality photo, or a mismatched location, instead unrelated reasons have been given, which suggests abuse of the system. The pub/brewery took me 5 times to get accepted, I provided links to newspaper articles that proved it existed and was indeed a small independent business, and it kept getting rejected anyway. Yet another brewery in the next town was accepted right away.

Why would reviewers reject good submissions? Potentially because the more submissions you review, the quicker you are entitled to an ‘upgrade’, which means your own submission jumps up the queue, or because they aren’t for the reviewers local area, so they simply don’t care about those submissions. From talking to my local Discord and chats, I’m far from the only one experiencing this issue. Their reports of weird rejections very much mirror my own, if you’ve experienced similar, do let us know in the comments!

Since the appeals process was launched I have appealed two of those rejected submissions, but they are still stuck in appeal from December 2021, it appears the new process is potentially massively backlogged.

It would be great if as part of the appeals process we could potentially flag abuse because of unrelated rejection criteria. It seems to be one of the biggest issues within Wayfarer (bar the absolutely monstrous queue of submissions), and it is putting off good reviewers who are finding either their rating is trashed for no reason, or their own submissions are rejected for bizarre reasons. Wayfarer is a system that is supposed to help us all, and when people find it isn’t helping them back, they are a lot less inclined to pitch in. Niantic must be able to see who has reviewed a submission, and therefore identify those who are abusing the system with dodgy rejections. Strikes could be added to accounts, with those who are found repeatedly falsifying reviews being removed from the system.

It often feels like people are simply mass rejecting submissions in order to boost their upgrade rating, rejecting a submission is much quicker than actually reviewing it properly, and if enough people are doing this, it is going to impact genuine reviewers ratings. Why bother to review properly when you can pick a random rejection reason that helps you get what you want in game quicker? Niantic haven’t talked much about Wayfarer since its inception, bar to add the appeals process and to quickly remove new features that were accidentally added to GO. We’d love to see more transparency and involvement in the system, because we are doing a job for free for Niantic, and many folks will tell you, it can be a frustrating one!

Have you experienced this issue with Wayfarer? And how has it impacted your use of the system?