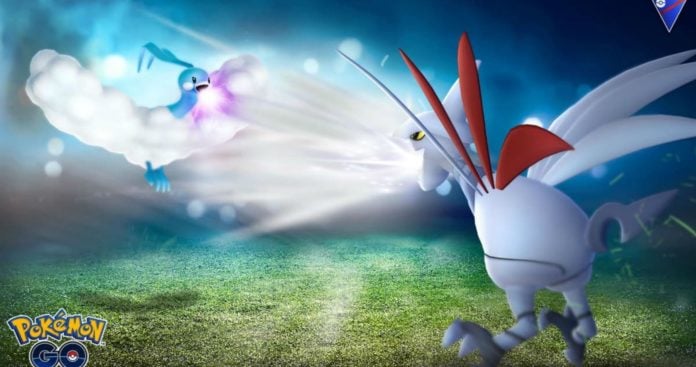 Nonetheless, we will go over said options, what they’re good against and how to counter them. First things first, here’s a simple infographic you can save and reference later:

Breaking Down the Big 5:

Aerodactyl is the strongest Pokémon in this cup by far. With two shields, it can beat basically everything except Steel Wing Skarmory, making it the best lead and/or switch in. It should be noted though, that Mantine, Togekiss and Altaria are extremely close matchups that can flip either way depending on the IVs of each Pokémon. Since Rock Throw is the main source of Aerodactyl’s damage, there is no need to unlock a second charge move. Shadow Aerodactyl is better overall, since its matchups against Mantine, Altaria and Togekiss are more dominant. This makes its IVs not as important as regular Aerodactyl.

Mantine is one of the bulkiest options available and has a very good moveset for this cup. Ice Beam hits almost everything super effectively and Bubble Beam gives it a bait option as well as the ability to lower the opponent’s Attack. It walls Steel Wing Skarmory and goes toe-to-toe with Aerodactyl, Altaria, Articuno and Togekiss. Against Aerodactyl, it’s best to spam Bubble Beam if shields are up. Against everything else, it’s usually best to go straight to Ice Beam. Its typing leaves it very vulnerable to Emolga and Zapdos.

Altaria’s sheer bulk and powerful Dragon Breath allows it to counter Emolga and Zapdos and stand its ground against Aerodactyl, Mantine and Skarmory. It’s only true counters are Togekiss and Articuno. It needs two shields to beat Skarmory. The Mantine matchup is very sensitive, just one Dragon Breath of an energy lead allows Altaria to win the two shield and no shield scenarios, meaning Altaria is safer as a switch in rather than a lead.

Emolga & Zapdos hard counter Mantine and Skarmory but struggle immensely against everything else if both shields are up. They are best used late game once shields are down or as switch-ins to get an energy advantage on something. This gives them the best shot at landing their charge moves. Zapdos beats Emolga if it lands a Thunderbolt. Shadow Zapdos is worse overall than regular Zapdos.

Togekiss can Charm through basically everything except Skarmory with two shields, even Zapdos and Emolga. It hard counters Altaria. The other two shield matchups (except Skarmory) are very close, so they are IV dependent.

Skarmory with Steel Wing is the only Pokémon in the entire Flying Cup that can reliably shut down Aerodactyl, Togekiss and Articuno all in one slot. It loses hard to Mantine, Zapdos and Emolga though. Shadow Skarmory is better overall.

Articuno hard counters Altaria and beats Emolga in every even shield scenario. It usually beats Mantine and beats Zapdos with two shields. Togekiss loses if it doesn’t have two shields, although the two shield matchup is IV dependent. It loses hard to Aerodactyl and Steel Wing Skarmory. It doesn’t need a second charge move since Icy Wind hits everything in this cup at least neutrally. Shadow Articuno has a better Zapdos matchup, but a worse one against Togekiss.

Credit to PvPoke.com for the simulation data.