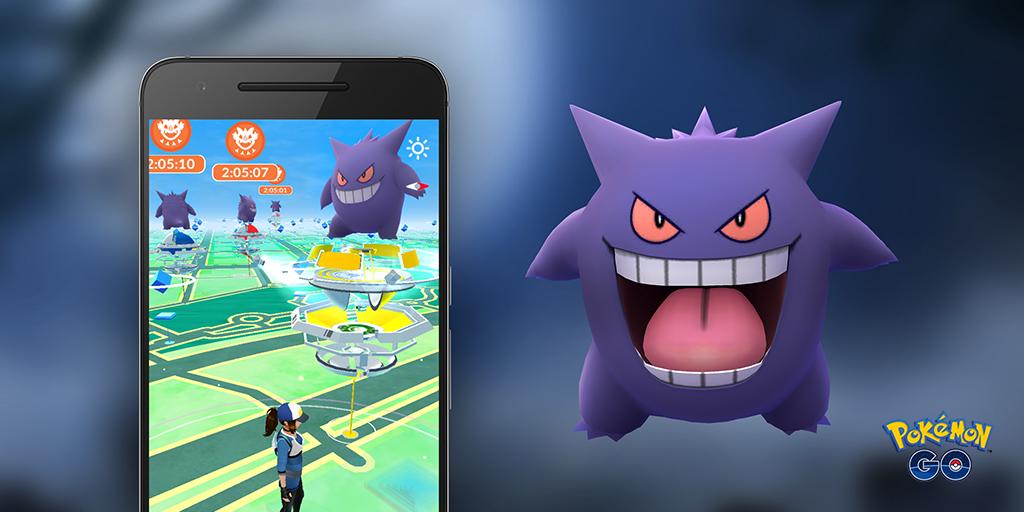 Update: According to APAC Trainers, the Gengar fought appeared to be more difficult than simulations for a tier 4 Gengar should have been. While raid rewards, 180 second lobby time, and 4 stars indicate a tier 4, they are giving 10,000 xp, normally reserved for tier 5s. This coupled with a potential up in difficulty should mean you need more caution planning your day and group numbers in the Americas and throughout Europe, Africa, India, and the Middle East if this is indeed the case. Duos should be reserved for much higher level players and Pokémon in this case.

Gengar day (also known as Gengar raid day and Gengar’s Special Raid Challenge) is a one day exclusive raid themed event that takes place on November 3rd, 2018. Gengar Day will feature Tier 4 Gengar raids, with a Gengar that knows two exclusive moves: Lick Ghost and Psychic Psychic. Shiny Gengar is also be available to Trainers upon completing Gengar Raid battles. Of course, you will encounter a shiny Gengar only “if you’re lucky”, to quote Niantic.

During Gengar Day, Gyms will only feature Tier 4 Gengar raids with 31256 Combat Power. You can catch a Gengar with the following Combat Power:

Without further introduction, let’s look at this Ghosty-ghoul and how we can get the most out of the day. If you’re only looking for our Gengar Counters guide, check here.

As we already mentioned, Gengar Day takes place on November 3rd, 2018, but let’s take a closer look at the details. For a full release article on the matter, click here.

Depending on what part of the world you are, event times will vary between regions. Please be sure to check the GMT offset in your local area.

Trainers might have more than one reason to go out on Gengar Day, and that isn’t the 5 Free Raid Passes talking.

It’s rather hard to differentiate between a shiny and a normal Gengar, as their color difference is very subtle. In order to help you spot the difference, here’s a comparison table that compares the normal and shiny version:

Unlike on the Legendary Bird Trio Raid Days, Gengar’s Day will feature two moves unique to Gengar this time around. For a complete analysis on Gengar’s Exclusive Moves, click here. Otherwise, we have this to summarize.

Shadow Claw Ghost Gengar has been a key trading tool since it became a Legacy Move Pokémon, however, with the Fast move Lick Ghost, this might change. Although Lick isn’t as productive in battle as Shadow Claw, it is so close of a second option that even our very own Database suggest using it over Shadow Claw.

Still not sure? Let’s take a look at the comparisons between these two moves:

Unless you already have more than enough Shadow Claw Gengars, you have no excuse for missing out on Gengar Day, with lick being such a close counter to Shadow Claw, it is something that no Trainer can afford to pass up.

Now that you are fully aware that you want *cough cough*, I mean need to catch this Gengar, let’s take a small look at the top Raid Counters. For a full Gengar Raid Guide click here.

Although Gengar is usually a Tier 3 Raid Boss, it’s feeling quite tough today and so on Gengar Day it is going to kick things up a notch to Tier 4. Even though this may be the case, Gengar will still fall at the hands of 2 Trainers if weather, move sets and a solid friendship bonus is on their side. Otherwise, we recommend heading into Gengar Raids with 3 high level Trainers, just to avoid any awkward losses.

When it comes to Gengar, there are three counters that rise above the rest, taking full advantage of Gengar’s weaknesses.

*Shadow Claw is a legacy move, while Lick is simply good to use, if you can evolve a few Gastly beforehand, or power up and TM a caught Lick Gengar.

In case you still need a few more counters to get by, the next best counters you can use are:

Before you head off on your spooky adventure, we want to leave you a few graphics to take with you on your travels, share them with your fellow Trainers, and use them in times of distress.

Keep up with the CP count, check out the Bonuses, or simply get lost in that dastardly handsome smile.

So you forgot to check what Gengar’s best counter are, and the raid starts in 3 minutes, who ya gonna call?

Of course, have fun, and stay safe, Trainers!