Trainers, prepare yourself for another day of themed raids, because Gengar and its shiny form are going to take over Raid Battles for 3 hours just like the legendary birds did for the Global Challenge rewards!

The event begins Saturday November 3rd at the usual Community Day hours, will feature Gengar in Raid Battles, will give all trainers five Raid passes, and will allow for the shiny form of Gengar to be potentially found and caught.

We have no idea currently what tier this Gengar will be. These days have so far been relegated to Legendaries, that took on the stats of a tier 4 raid, including boss CP and 180 second timer instead of 300. So it will be interesting to see what they do with Gengar, a normally easily soloable tier 3.

Psychic has been indicated by several Pokémon Youtubers, as well as the official Pokemon.com, to be a exclusive move for Gengar for the day. To be frank, there is not going to be a terrible amount of usefulness for the move, and it is a shame for those thinking it might have been Shadow Claw.

For general counters and a guide to follow for Gengar, we will update the Gengar Raid Guide and tag it here for preparation for the day.

For those wondering what a shiny Gengar looks like, you can be thankful that Niantic added the shiny indicator, because it looks almost exactly the game as regular Gengar:

Finally, Niantic Support has clarified their wording, stating that it is not this weekend, but that the date is indeed correct at November 3rd in the various regions of the world. Their in-game announcement, as seen below, claims it is both the coming weekend and the 3rd of November. 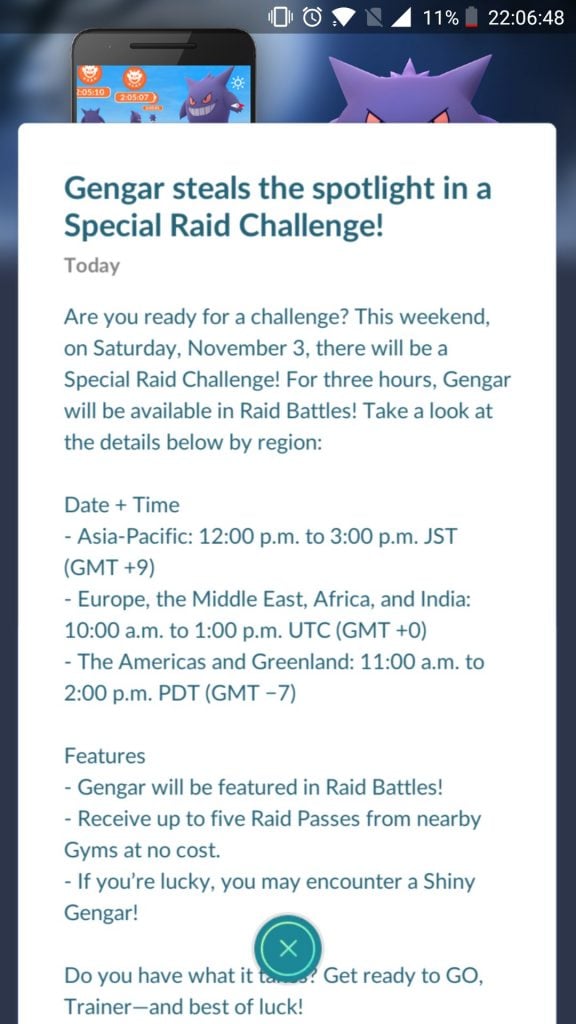