Hydro Cannon Feraligatr is a powerful water type attacker in some situations, but can also severely lose out to the Legendaries in others. Before we explore and analyse how useful Feraligatr could be in the Raid and PvP meta-games, let’s use our brand new DPS & TDO comparison ⚔️ tool to see how it stacks up against its competition in neutral battles:

(For the purposes of this article, Hydro Cannon will often be abbreviated to HC) 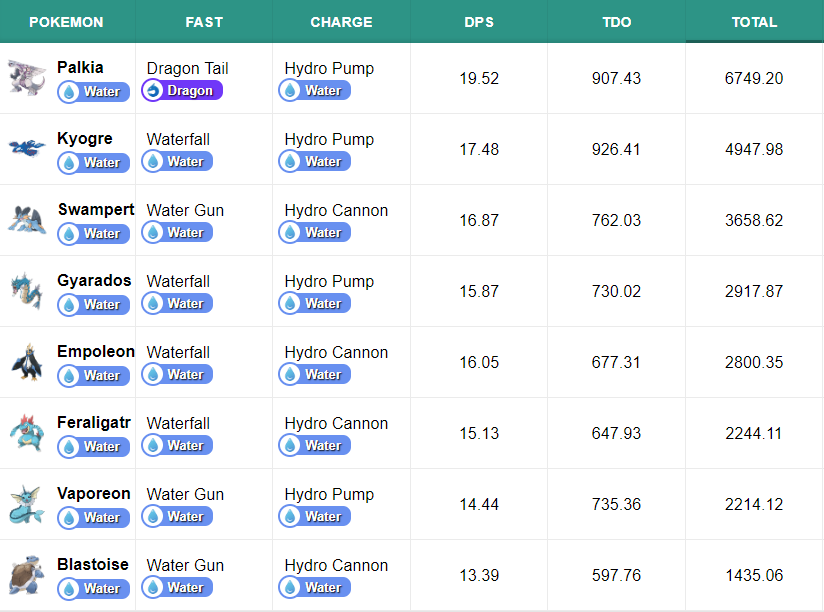 In neutral matchups, HC Feraligatr is roughly on par with Gyarados, but may do slightly better against any Rock types due to Gyarados having a weakness to Rock type moves. Conversely, Gyarados only takes neutral damage from Grass type moves, rather than the super effective damage that the pure Water types would take.

We see HC Blastoise at the bottom of the table, but some future recipients of Hydro Cannon, like Swampert (expected on July Community Day) and Empoleon (expected on January 2020 Community Day), will output more DPS than Feraligatr in battles that aren’t affected by Type Advantage.

Moving further up the table, we see that Kyogre will remain as the best neutral Water type attacker until Palkia makes an appearance in Tier 5 Raids. Kyogre will still have the highest TDO though, so this may make it a better choice than Palkia in Master League PvP battles.

As the current Tier 5 Raid boss is the Fire and Steel Type Legendary, Heatran, Feraligatr’s Water Type movesets would deal Super Effective damage. Let’s check how Feraligatr with Hydro Cannon would perform compared to the other top Heatran counters: 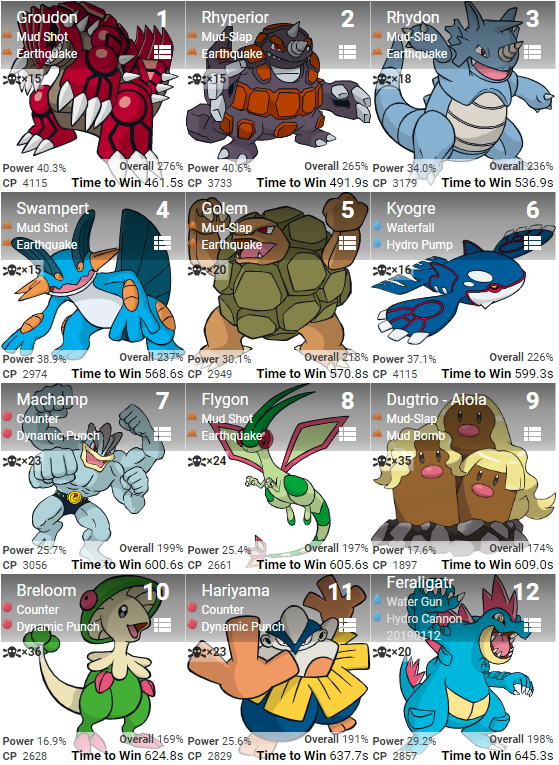 As we can see, a level 40 HC Feraligatr, even with Water Gun (which would be its best Fast move if it were possible to combine it with HC) ends up as the twelfth quickest counter to Heatran, based on no weather boosted moves, no friend bonuses and battling Heatran with its most difficult moveset.

For any future Fire, Rock or Ground type Raid Bosses, things could be slightly different, but in general, Feraligatr should only be used as a Raid boss attacker, if you can’t fill your Battle Party with the higher ranked counters.

(credit to Pokebattler.com for their Raid Boss counter simulator and results shown above)

When it comes to PvP, Feraligatr is an interesting choice. Water Gun Water is unfortunately a legacy quick move and won’t be obtainable with a Hydro Cannon combination. It’s next best Fast move in terms of energy generation, and therefore the best one to team up with HC, is Waterfall with an EPT of 2.67 (see our PvP Move Stats article for a full comparison of moves in PvP).

As you’ll probably be aware, HC Blastoise is currently one of the best all round choices for a Great League PvP battle, but with a higher TDO, HC Feraligatr may well surpass Blastoise especially as both have access to Ice Beam as a second Charged move to cover their shared weakness to Grass type moves.

If however you’re a Trainer who likes to surprise their opponents, Feraligatr does also have access to a Dark type moveset in Bite and Crunch. Both are sub-optimal in terms of EPT and DPE but if you know your opponent is taking Ghost or Psychic types into battle, then this could be a very niche use for Feraligatr.

All things considered, Feraligatr with HC could certainly be a dominant force in both the Great League as well as the Ultra League; As it has a max. CP of 2857, you could power a high IV one up to around level 33, and keep it within the CP limit of the Ultra League. While this would be a much cheaper investment than Blastoise (which can go all the way to level 40 and still remain under cp2500) Feraligatr’s lower level would almost certainly mean it wont perform as well in the Ultra League.

Feraligatr with Hydro Cannon is going to be of little use as a counter for any Fire, Rock or Ground Type Raid Bosses that come along, unless you lack enough Kyogre, Gyarados (and eventually Palkia) to fill a team or two, not to mention any other counters there may be to that particular Raid Boss…

Where Feraligatr will shine is in the Great League; It would certainly be worth evolving at least one HC Feraligatr that falls under the cp1500 limit. We’d also recommend evolving one for use in the Ultra League because, if you can’t afford to max out a Blastoise, then Feraligatr may be the next best thing. Be sure to keep an eye on Pokébattler’s PvP Rankings to see whether HC Feraligatr makes an appearance and/or performs adequately better than HC Blastoise to make it worth powering up.