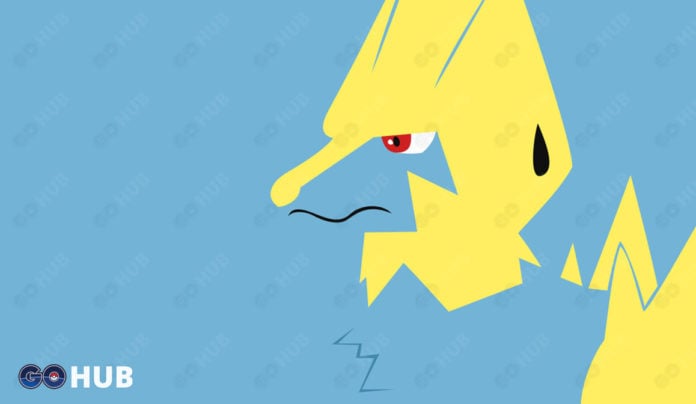 Manectric is a Tier 2 Raid Boss, holding a Raid Boss CP of 11628 and a pure Electric typing. If you want a chance at taking down a Manectric solo style, then it is recommended to wait until being at least level 15.

Manectric should be one of the easiest Raid Bosses to solo. There are few factors that can truly influence the fight, considering Manectric’s lower stats and CP in general. Manectric is easy to take down, however if you choose counters haphazardly, you may have a bit of a hard time.

If you would like to see how Manectric’s stats stack up in the meta, then be sure to take a look at Manectric and Electrike in our Generation 3 entries.

Manectric, being a pure Electric type Pokémon, has a weakness to Ground type moves, which is good for those who have been able to accumulate an army of Groudons. However, if you haven’t, the DPS (Damage per second) difference between these counters is not that big, so as long as you have a reasonable CP team composed of any of the Pokémon you see here, you should be ready to solo Manectric.

Groudon is a pure Ground type Legendary Pokémon known for its strong stats and can function as well as any powered up Rhydon. There is no doubt or wonder as to why Groudon is in first place and should be your number 1 pick with Manectric Raids, it’s a Ground God!

Rhydon is a dual Ground / Rock type Pokémon often used in the meta. In a similar fashion of Alakazam and Mewtwo, Rhydon can be considered the weaker sibling to Groudon, sharing an almost similar typing and the exact same recommended moveset against Manectric.

Salamence is a Dragon / Flying type Pokémon often sought out by trainers as one of the main Dragon types in game. Outside of this Manectric arena, we cannot recommend Salamence especially in comparison to the other members of the Dragon type family. However, we cannot negate Salamence’s strength and effectiveness in the fight, working as a little brother to the Legendary Rayquaza.

Mewtwo is a pure Psychic type Legendary Pokémon known for being an absolute side-sweeper when it comes to almost any kind of raid. Although like many other counters on this list, it does not cause super-effective damage, we still have to recommend Mewtwo for its base power and high CP value.

Alakazam is a pure Psychic type Pokémon known for being used as a second option to Mewtwo, sharing similar effective psychic type movesets, and being used in the same areas of battle. Because of this, we recommend you take your Alakazam to truly be a smaller Mewtwo, take advantage of that power.

Dragonite is a Dragon / Flying type Pokémon used heavily in the meta game and in terms of a Manectric Raid Boss, it is still a tank as well. Though it does not take advantage of any of Manectric’s weaknesses, its high stats make it a strong counter. We recommend using Dragonite as a substitute for Rayquaza, if unavailable.

Golem is a Rock / Ground type Pokémon commonly used as a counter for many different Pokémon types, and the Electric type Manectric is no exception, wielding a dual Ground type moveset, Golem will function almost exactly the same way as Rhydon, and in turn, this makes Golem a weaker Groudon as well.

Espeon is a pure Psychic type Pokémon not commonly used in the meta. However, because of its typing and movesets, it is impossible to not recommend using at least one in union or substitution of Alakazam.

Moltres is a Fire / Flying type Legendary Pokémon that although may seem useless upon catching, if weather boosted or powered up, can become a useful asset to any team, and although it may not take advantage of Manectric’s weakness, it can still bring in a powerful blow.

Manectric has access to all of the following movesets:

When comparing all of Manectric’s possible movesets, it becomes more than apparent just how easy it is to take one down.

Even though the ranking below goes from Easy to Hard, please note that this is by the own Pokémon’s standards, so in all reality, none of Manectric’s moveset are difficult.

Below is a moveset table that shows off Manectric’s movesets ranked by difficulty, the ranking was determined by the TDMG (Total Damage) caused by a single energy cycle.

In all honesty, we could tell you what weather to avoid, but Manectric still won’t be a challenge to take down, so if you want to just catch a higher CP one, wait until Rainy weather. Although it will be slightly harder to take down, it really shouldn’t be a challenge for any kind of trainer. We recommend that if you plan on using your Psychic or Dragon type counters, to wait until Windy weather or if you are using your Ground counters, take advantage of Sunny weather.

Below is a table that shows off the weather advantages and disadvantages in relation to Manectric and the counters in question.