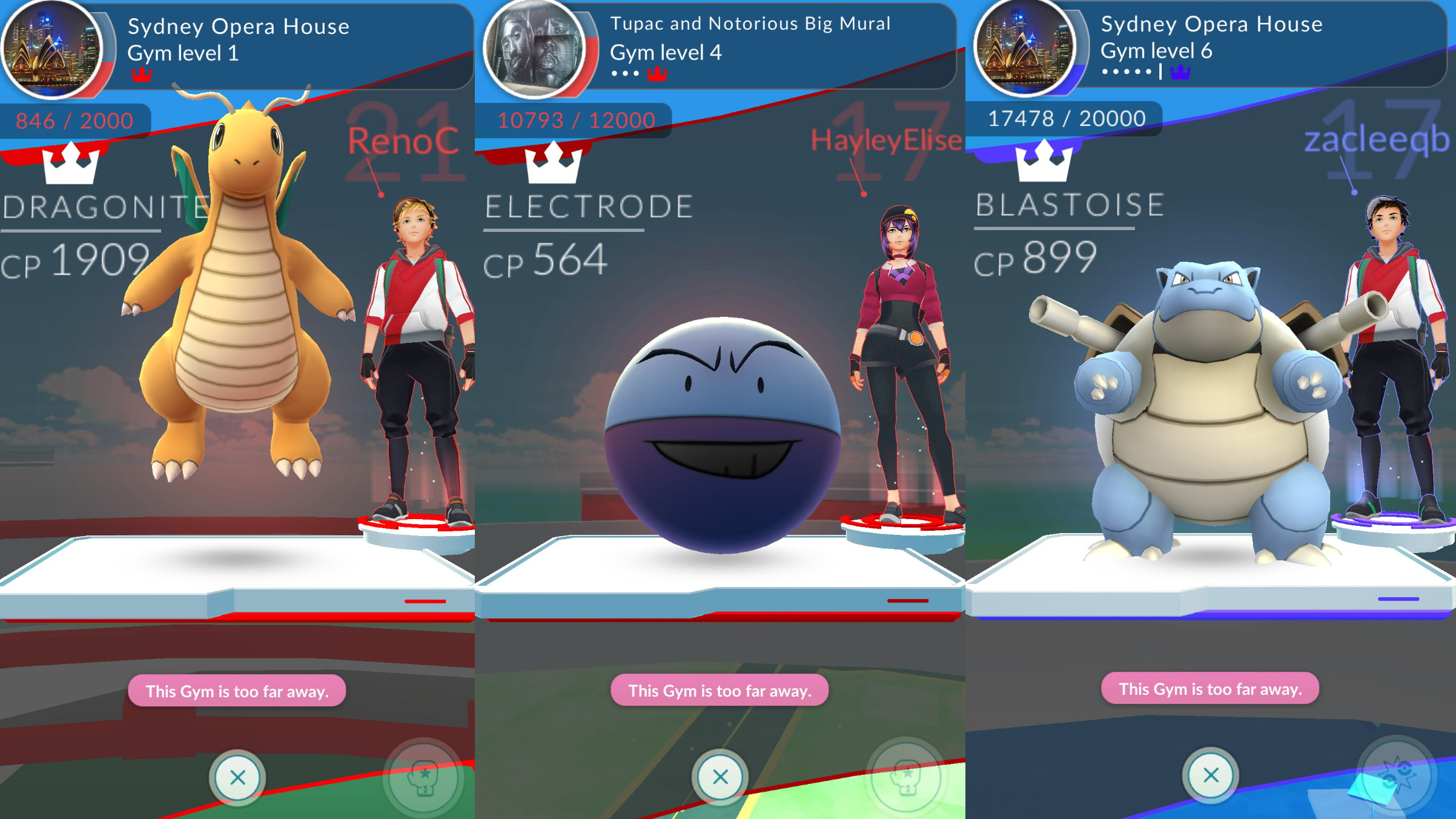 The initial phase of Pokémon Go primarily consists of catching Pokémon and earning XP to increase one’s Trainer Level. You must be at least Level 5 to participate in gym battles. Until then, you should focus on catching as many Pokémon as you can in order to level up and have plenty of Pokémon at your disposal to prepare for battles.

Playing Pokémon Go in the beginning is all about catching Pokémon and increasing your level as a trainer. After reaching Level 5 the game allows to participate in gym battles by giving you three teams to choose from: Mystic (Blue), Valor (Red), Instinct (Yellow).

The team you choose is the one you will be on for the rest of the game. There is no option to change your choice at this time in Pokémon Go. It will determine which gyms you can take and which you can train at.

Gyms are placed at various locations which usually map to real world monuments and places of interest. They can be one of four colors:

All gyms have a level and prestige. Gym level determines the amount of Pokémon that can defend the gym (Level 1 – 1 Pokémon, Level 2 – 2 Pokémon, etc), with the highest level being level 10. Each player can place only one Pokémon in the gym which remains there until the gym is taken by another team.

The Pokémon you place to defend the gym can not be taken back and can not be replaced.
The player with the Pokémon with the highest CP (Combat Power) in the gym is the gym leader.

Gym prestige to a gym is similar to what XP (Experience Points) are to a player, with two exceptions:

The more prestige the gym has the higher it’s level.

Training at a gym

If a gym is unoccupied (grey), a player of any team can place their Pokémon inside to defend it. Once a Pokémon is placed, the gym turns into the color of the team who’s Pokémon is inside and effectively becomes that teams gym.

You can train at a friendly gym (gym with the same color as your team). Training means battling with a single Pokémon 1v1 against each Pokémon in the gym, starting against the one with the lowest CP and ending with a battle against the gym leader’s Pokémon.

If your Pokémon is defeated (it’s health is lowered to 1) the training is over and the Pokémon is returned to you. That means your Pokémon can not die while training at a gym, but they will need to have their health replenished with a potion before continuing to train with them.

Each battle one gives the gym more prestige. Once you reach the prestige cap for a gym, it gains a level (the prestige cap increases) and that’s when a player of the same team can
put a Pokémon inside (if they don’t have one already).

If a gym is grey, it can be claimed by just placing a Pokémon inside. However if it already belongs to another team, it must be won over by battling.

Battling against a gym is similiar to training at it, only you get to choose six Pokémon to take with you. At any momoment during the battle, the Pokémon with which you are fighting can be switched by you (unless their fainted).

If a Pokémon you own has it’s health reduced to zero it faints and is no longer available for the remainder of the battle. After the battle is over, the Pokémon that fainted can be revived by using the revive item.

The more fights against the opposing team’s Pokémon you win the more prestige the gym loses. Once it loses enough prestige it’s level drops by one and the Pokémon with
the lowest CP is kicked out of the gym (and returned to his trainer with 1 health).

If a gym’s prestige drops to zero, it turns grey and can be taken over by a team, but be careful! Any team can claim a grey gym, even the team that just got kicked out of it.

Why should I claim gyms?

Holding gyms is useful because it gives you extra stardust and coins. You can claim them by going into the shop menu and clicking the shield button at the top right. It gives you 500 stardust and 10 coins per gym you have a Pokémon as a defender.

Note that the reward can only be claimed once every 21 hours, so the button is best used at the end of the day, after you are done taking over gyms.