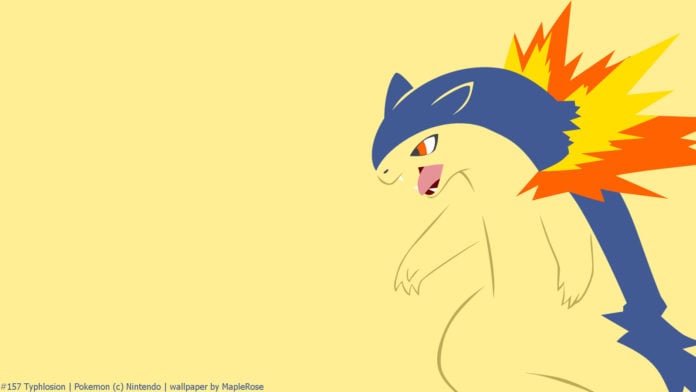 Typhlosion is a Tier 3, Fire type raid boss with a raid boss CP of 19579. Its rounded stats, 223 attack, and 173 defense, make it a good candidate for duos, though it can be soloed relatively easily. As a Fire type it is weak to: Ground, Rock, and Water

Typhlosion can be caught in the following CP ranges from Raid encounters:

Without Blast Burn, Typhlosion is not very important to the raiding or PVP scene and is outclassed by Blast Burn Charizard and other Fire-types such as legendary Moltres and Entei. With that in mind, it is not important to stock up on Typhlosion raids, but could be fun for the speedy raider challenge.

As mentioned above, Typhlosion is weak to Ground, Rock and Water types, so we will use those types primarily. The nice thing about them is that all three counter types are boosted in different weather conditions, providing a wider variety of scenarios.

We will talk more about weather effects in battle down below in terms of moves, but the weather is always about half the battle, and the weather conditions are important for picking your best counters. If you look at the table above, they are sorted into the counter types.

In Rainy, you’re better off using water, in Partly Cloudy use your rock types and in Sunny give your ground types a spin! In neutral weather, use your best counters from the various typings, and if you do not have a full team of one type (ie. A full water type team), fill in the extra spaces with your best Pokémon from the other counter types. No shame in a mixed typing team of well-rounded counters.

Typhlosion has access to this set of moves as a raid boss:

As far as fast moves go, all of your optimal counters will resist Ember, making it the easier move to go against. Not that Shadow Claw will hit super effective against any Pokémon that you will probably use, but not having the resistance tends to make it hit a little harder.

For charge move, the red sirens go off for Solar Beam! Solar Beam hits super effectively against every normal counter listed above, except for the dragons. It is a very good coverage move but could make a duo run of it a little tighter than it should be, especially in sunny weather. Fire Blast is the weaker of the one bar, fire type, charge moves, so that would be the easiest charge to go up against.

As mentioned above under our counters list, the weather is half the battle! Here is a visual representation of how the weather will play a role in your battle against Typhlosion!