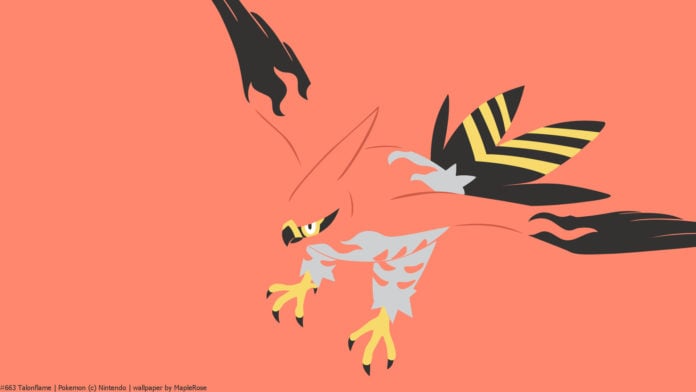 The combination of Fire and Flying makes everyone think of the iconic Charizard.

To others, it is the legendary bird from Kanto: Moltres (Hail Team Valor!)

But a whole six generations later, we also have arguably one of the hottest regional birds in the world of Pokémon…

Ash has almost always had a fully evolved regional bird in his team and Talonflame was an MVP during his Kalos journey.

Is Talonflame that hot in the Pokémon Go meta?

More importantly, how does it compare with Charizard in trainer battles?

You will find out through this article.

So without further ado, let’s see just how sharp the talons of this firebird are!

Talonflame is a Fire and Flying type Pokémon and as such is weak to the Rock Electric and Water types, with the Rock type weakness being 4x

Talonflame’s typing is excellent both offensively and defensively…

For one, it resists two of the best offensive types in the Pokémon world: the Fighting and the Ground types, both of which tie for the maximum super-effective coverage at 5 types. It is worth noting that its Flying typing lets it deal super-effective damage against the Fighting type.

It is also able to resist as well as deal super-effective damage against the best defensive type in the meta: the notorious Steel types.

So Talonflame’s typing alone grants it a major thumbs-up for battles.

But what about its stats?

Talonflame has the following stats in Pokémon Go:

On that note, let us even check out Charizard’s stats:

While Talonflame’s stats are nothing spectacular, they are quite balanced. Its ATK stat is not high enough and its bulk is just average.

So nothing really exciting here but those stats rounded out close to each other can possibly give it some potential in PvP.

Any Fire type Pokémon getting Fire Spin is always a huge plus.

Peck gets STAB but is slow. It just gets so underwhelming when you compare it with the superior energy gains of Fire Spin.

Talonflame’s bulk isn’t exactly all that great. So it’s any day better to give it a powerful fast move that also charges nicely.

Brave Bird is its most powerful charge move and the primary factor that makes Talonflame a danger, despite drastically debuffing its own DEF stat.

Flame Charge isn’t great for damage but it charges the quickest and provides a guaranteed ATK boost, making its Fire Spin more threatening

Flamethrower is good if you want to go for Fire type offense but Brave Bird has nuking damage output at the same energy.

Fire Blast is inferior to all of Talonflame’s other moves. Plus, it is way too expensive in terms of energy.

Hurricane is another expensive move and is totally outclassed by Brave Bird.

What is Talonflame’s ideal moveset?

This combination makes Talonflame a threat both as a Fire as well as a Flying type (something that even Charizard cannot boast of!).

For starters (pun intended), if you consider a face-off between a Talonflame and a Charizard at pvpoke.com, for both the zero shield and 1 shield scenarios, Talonflame takes the win quite convincingly.

In both cases, I have considered perfect Great League PvP IVs of 0/13/15 for both Talonflame and Charizard.

With regards to the entire GL meta, Talonflame can pull off some wins such as Alolan Marowak, Galarian Stunfisk, Dewgong and Whiscash, but Charizard does it better and against more Pokémon.

But the stats of both Talonflame and Charizard look more built towards the Ultra League, right?

Against the entire Open Ultra League meta, a 100 IV Talonflame at level 40 has a win rate of 44.1% under the 1 shield scenario:

So a level 50 Talonflame actually edges out a level 40 Charizard in the open Ultra League!

So does Talonflame beat Charizard?

Technically, it does in a face-to-face encounter

But when you think against the entire PvP meta in the open Great and Ultra Leagues, Charizard does seem to have the edge.

But does it really?

Here are some really noteworthy points:

Talonflame is honestly not far behind Charizard in the restricted CP PvP leagues. It is easier to obtain and doesn’t need an Elite Charged TM or a special event to get its ideal moveset.

Is it justified to power tup Talonflame to level 50… a place where it beats out Charizard in all ways?

Talonflame at level 50 is undoubtedly a good PvP candidate and if you really like it, go ahead!

You’re better off evolving your best Charizard to its two mega evolutions and so you can keep a Talonflame to cause fiery havoc in the Ultra League!

In conclusion, Talonflame ultimately does prove itself worthy of tackling the infamous Charizard in more ways than one and also gives a ‘brave’ performance in general.