Editor note: this field report is written by PKSparkxx, a Youtuber that we really like. Hope you enjoy it as much as we did. For a full guide on how to fight and win against a Mewtwo, check our Mewtwo Raid Boss guide.

P.S. Sparkxx, thank you for the report, it’s great to see how Pokemon GO looks in Philly.

On 9/15/17, 6pm EDT, I participated in one of 3 EX Raids in Philadelphia to battle and capture Mewtwo.

I arrived 30 minutes before, and there was a HUGE group, around 50 people, waiting for Mewtwo. Instinct took control of the gym 2 hours prior and Instinct kept feeding Golden Razz Berries to hold the gym down the entire time, so Instinct had control of the gym when the egg hatched (GO, INSTINCT!)

From my count, at raid time, we had 22 Instinct Players, 17 Mystic and 16 Valor. Other players trickled in after we began our battle, so I have no idea what team they were on.

We also had several Level 40 players at the raid. They tackled the Mewtwo in a separate group, and carried a few of the lower leveled players with them. Most teams grouped up on their own:

I was in the Instinct PG and we had 15 people in, beating it within 90 seconds. Most players brought Bite/Crunch Tyranitar & Gyarados vs a Psycho Cut/Shadow Ball Mewtwo. After the raid, most people were able to catch it. From those I spoke to, only 3 people missed the Mewtwo.

From those I saw, the highest CP captured was 2069 (15/14/15 IVs, 98% Perfect) captured by me(!). A bit of lag hindered a few of my throws, but I was able to catch it on my 5th ball. The crowd there was mostly asocial, unfortunately. I tried to talk Pokemon with people, but most stayed withheld and in their phone. The folks at the Sprint store were nice, bust mostly because they were trying to get us to switch to their service – like that would ever happen. 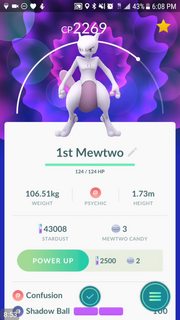 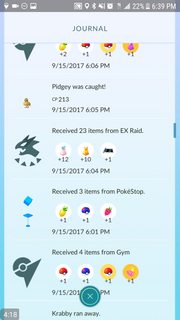 After people completed their bonus challenge, they just…dispersed. No “good bye” or conversation. Just began trickling out. I stayed a bit to converse with who I could, but left about 20 minutes after the raid began. All in, Mewtwo raids are great!