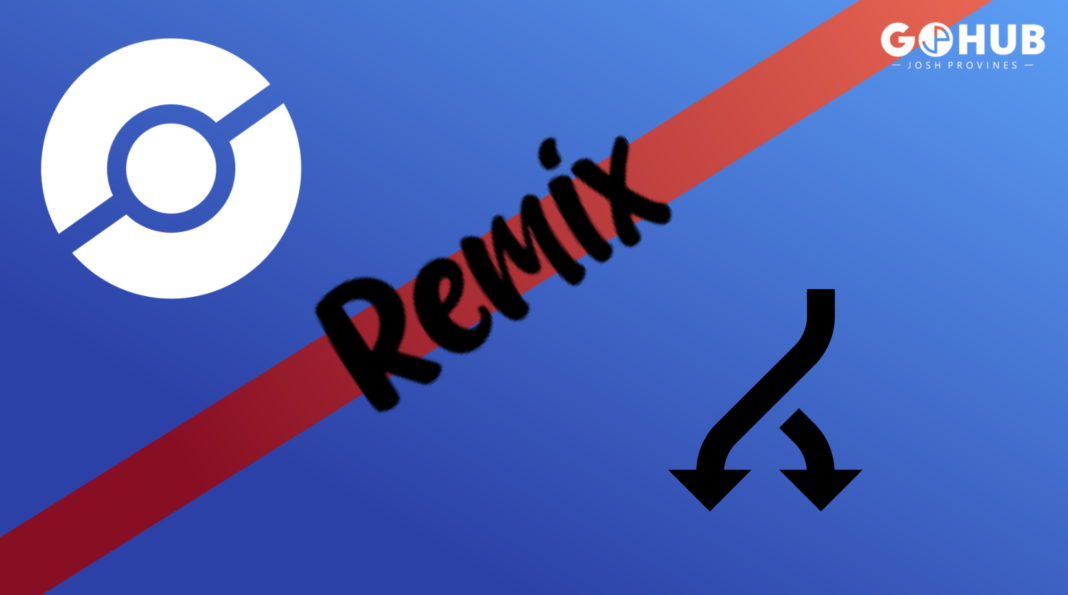 This will be a breath of fresh air in the Great League if you’re sick of seeing the same meta Pokémon used almost every game. It encourages the use of Pokémon that are not as commonly seen in the Great League which is sure to make things interesting.

Here is the list of Pokémon that will NOT be allowed in the Great League Remix Cup:

Now that we have familiarized ourselves with the Pokémon we can’t use, let’s talk about the ones we can use.

Firstly, let’s look into the top 10 Pokémon that will be used in the Great League Remix Cup according to PvPoke.com and discuss their strengths and weaknesses. 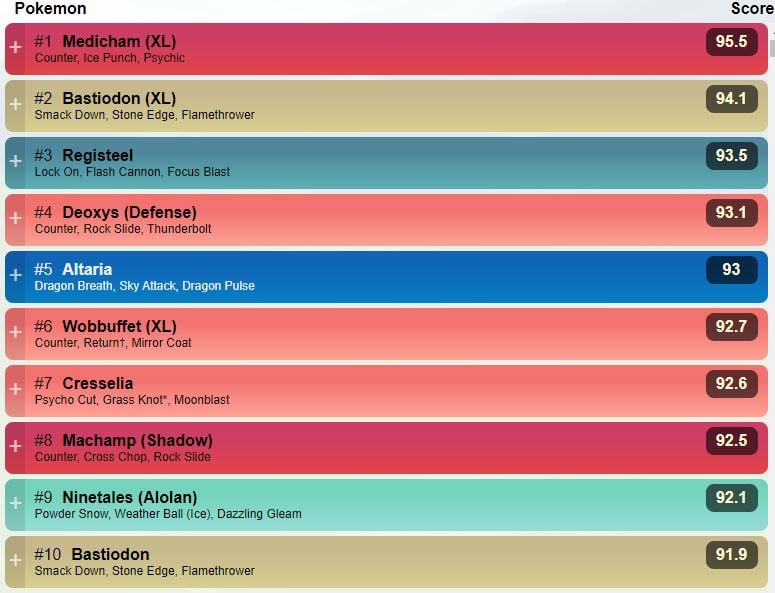 Medicham has been a threat since the very beginning of PvP. With the introduction of XL candy, some of these Pokémon including Medicham got an immense overall buff which has had an influence on its popularity and usability. Even a standard non-XL powered Medicham is still a major threat to the Great League Remix meta.

It has a positive matchup against Pokémon such as Scrafty, Bastiodon, Politoed, Registeel and Abomasnow to name a few which are all top-tier Pokémon in this format. With great strength comes great weaknesses and in this case, Pokémon such as Altaria, Deoxys (Defence), Ninetales (Alolan), Sableye, and Wigglytuff are among its hardest counters.

I’m sure everyone at this point, has a love-hate relationship with Bastiodon. Needless to say, Bastiodon will be available to use and if you’re not prepared for one, it can be a nightmare to deal with.

XL Bastiodon and its standard counterpart can deal with a large amount of the meta with its main job literally being a wall against Flying, Dragon, Fairy, and Rock type Pokémon. Bastiodon does have to watch out against every Fighting type Pokémon and also ‘mud bois’ such as Politoed in the Great League Remix meta.

It feels as though many trainers have forgotten about our robotic friend Registeel after its considerable nerf to Flash Cannon and Focus Blast which are its 2 main moves. However, don’t let this discourage you from using it in the Great League Remix Cup. Just like Bastiodon, Registeel can be a wall against a lot of Pokémon in the meta, and even counters Bastiodon with its devastating Focus Blast nuke.

Registeel has similar strengths to Bastiodon with the exception of Scrafty, which Registeel has a chance to knock out when shields are down. Almost all Fighting types will beat Registeel alongside Politoed which are the main counters.

Deoxys Defense has always been a solid choice in the Great League. Its versatility and bulk paired with its heavy-hitting Charge move Psycho Boost, make it a dominant competitor in battle.

Great League Remix is no exception as it can handle or have some sort of use against just about every Pokémon in the meta.

Deoxys Defense has access to Rock Slide and Thunderbolt which are 2 strong Charge moves that can cause pressure for your opponent if they don’t know what move you’re using. It creates shield pressure and has the potential to bait opponents into bad situations which makes it one of the safest swaps in the Great League.

Altaria can be one of those hard to take down Pokémon if you’re not equipped with the right solutions for it. Dragon Breath is an incredibly strong Fast move that adds up damage rapidly against many Pokémon.

Its dual typing of Dragon and Flying give it plenty of resistances and is a powerful solution against Fighting and Grass types primarily.

Altaria does come with a downside which are its counters such as Registeel and Bastiodon which can absolutely wall Altaria. This is why Altaria is mainly used as either a Lead Pokémon to swap out if you don’t land a good matchup or a Closer to take down the enemy.

This may come as a surprise, but a Purified XL Wobbuffet can be deadly against a large majority of the meta. It has access to Counter as its Fast move and Return + Mirror Coat for its Charge moves.

Wobbuffet has a whopping 382 Stamina stat which makes it a tanky nightmare that can be used as a marvelously safe swap.

Its best matchups are Pokémon such as Scrafty, Bastiodon, Politoed, Toxicroak, and Abomasnow to name a few. Wobbuffet will have trouble against Flying types such as Altaria alongside Deoxys Defence, Hypno, and Meganium.

Cresselia is a juggernaut that has bulk mixed with nuke Charge moves being Grass Knot, Moonblast, and Future Sight. It can be a solution to many Pokémon that will be roaming around in the Great League Remix Cup.

Cresselia can run either Psycho Cut or Confusion as its Fast moves, however, Psycho Cut is the more popular move as it generates energy faster. Just like Altaria, Cresselia can be hard countered by Pokémon such as Registeel and Bastiodon.

More specifically, its Shadow variant which deals 20% more damage than its standard form. Shadow Machamp is arguably one of the deadliest Pokémon when you have shield advantage because of the fact that Cross Chop and Rock Slide have such good coverage and their damage output.

Machamp has the possibility to take down Altaria with Rock Slide which can deal a substantial amount of damage. It also has key matchups against Bastiodon, Registeel, Politoed, and Scrafty.

Machamp is played best as a Closer, meaning it excels with shields to close out a game. Pairing Machamp with Pokémon that counter it makes for a strong core team composition.

Alolan Ninetales rose from the shadows this season because of it gaining access to Weather Ball (Ice) which is an incredibly spammy and hard hitting move. It can also be played as a Charm user which is a powerful Fast move that can take down many Pokémon quickly such as Fighting types.

If you’re deciding on which Fast move you should use on Alolan Ninetales, find out what your current team composition is lacking and go by that information. For example, if your team is weak to Fighting or Dark types, then Charm would be the better option.

Alolan Ninetales has positive matchups against Pokémon such as Altaria, Scrafty, Meganium, and Abomasnow, but has clear weaknesses against Steel and Rock types.

Since XL Bastiodon and standard Bastiodon are both on this list, we will talk about the next strongest pick which is Vigoroth. Vigoroth is mainly played as a safe swap due to the fact that it can spam Body Slam which can be annoying to deal with for most Pokémon.

Vigoroth is a Normal type Pokémon that feels like a Fighting type with its use of Counter. For this reason, it can deal with Steel, Ice and Rock types comfortably. Other Fighting types pummel Vigoroth and it also struggles to deal with Flying type Pokémon.

Vigoroth is one of those Pokémon that fit into most team compositions well and also has access to Bulldoze for extra coverage against Electric, Fire, Poison, Rock, and Steel type Pokémon.

When it comes to any team composition, versatility is key. Understanding its strengths and weaknesses while playing accordingly will grant you the best chance at victory. These teams have been carefully selected to minimize weaknesses and flaws all while focusing mainly on coverage.

Each one of these example teams provides answers for most of the commonly seen Pokémon in the Great League Remix meta. With enough practice, these teams do have the potential for you to gain ranks and boost your ELO points.

If you’re new to PvP or are looking to get into the battling scene, this may be the perfect opportunity for you to use unique Pokémon that get commonly countered by the current ban list which will make battles all the more exciting!

Remember that practice makes perfect when going into PvP. Try not to get discouraged after a loss and remember to keep calm and collected when going into each battle. If you’d like to learn more about different sorts of advice for PvP not commonly talked about, then you may be interested in this article here.

Best of luck, Trainers!
Until next time.