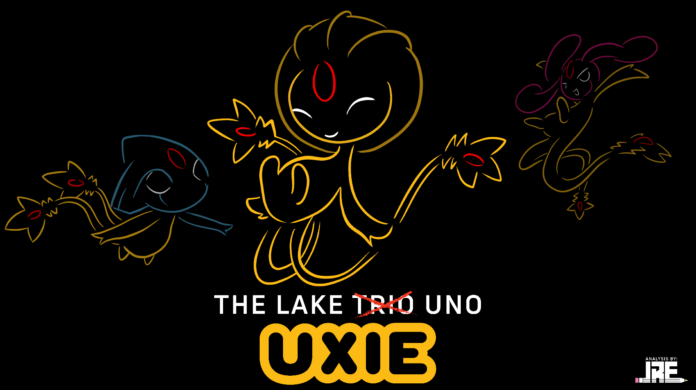 The “Under The Lights” article series provides some deeper dives on Pokémon of particular interest in PvP. Today, that means a quick look at the Lake Trio, returning to raids this week. But only one of them really has any PvP value, so to be specific, it’s time to put Uxie… under the lights.

So I kinda breezed past the part about the Lake Trio having PvP value. Yes, there are three, and yes, Uxie is the only one worth anything in PvP. Part of that is the moves, as we’ll see shortly, but mostly it just comes down to stats.

In Great League, Uxie has about 20-25 less Attack than Mesprit, but about a half dozen more HP and a whopping 50 more Defense. It’s even more lopsided when compared to Azelf… Azelf has about 50 more Attack, while Uxie has close to 20 more HP and over 80 more Defense on average.

Uxie isn’t the greatest tank, trailing things like Azumarill and Bastiodon and Umbreon and such, but it has better overall bulk than stuff like Whiscash, Altaria, Greedent, Lapras, Serperior, Hypno, Jellicent, Dewgong, and yes, Defense Deoxys!

In Ultra League, Uxie’s bulk (on average) exceeds that of Meganium, Armored Mewtwo, Jellicent, Skarmory, Snorlax, and even Altered Giratina and Lugia! Put simply, Uxie is a bulky little guy, and that can get you far in PvP… certainly much farther along than its Lake Guardian comrades.

The typing is quietly pretty nice too. Most Psychic types in PvP tend to be saddled with a secondary typing that comes with good, but also plenty of bad.

But with pure Psychics like Uxie, things are very simple: avoid Darks, Ghosts, and Bugs, and wail on opposing Fighters (and maybe Psychics) with relative impunity. That’s it… that’s the list.

Of course, any PvP Pokémon, good stats or not, is made or broken by its moves. Does Uxie have what it takes?

So true to their nature as being a close trio, Uxie and Mesprit, and Azelf all have the same fast moves. Extrasensory actually isn’t a bad PvP move, but Confusion‘s superiority is pretty clear: it deals a significantly higher amount of damage and applies tons of pressure as a result, while generating only 0.33 less energy per turn than Extrasensory. It is definitely the fast move all three of them want, including Uxie.

Swift is trash, and that’s probably putting it nicely. There’s really no reason to use it or even have it on any Pokémon stuck with Swift in its movepool. Specifically in Uxie’s case, just wait for 5 more energy to launch Thunder instead… 40 additional damage and, unlike a Normal move like Swift, will often deal super effective damage on top of that (to Waters and/or Flyers… at least those without a secondary typing that resists Electric damage, of course). And perhaps more importantly, it deals at least neutral damage to the types that resist Psychic damage (Darks, Steels, and other Psychics).

By comparison, Mesprit’s Blizzard costs 75 energy and Azelf’s Fire Blast costs 80! They deal a whopping 140 base damage when they land, but that doesn’t matter if they never live long enough to launch those moves in a meaningful situation! Uxie, by contrast, has the bulk to reach Thunder, often in multiples.

It’s actually kind of amazing that by far the bulkiest of the Lake Trio also happened to get the cheapest of their three unique coverage moves. What a gift for PvP! (I know that’s in keeping with MLG, but still… it’s nice to see it all come together here in GO.)

And this is also what further torpedos the other two Lake Guardians, as they ALSO have the useless Swift and all share Uxie’s third charge move: Future Sight. It’s an underrated move, a clone (save for typing) of universally accepted-as-good PvP move Earthquake and strictly better than the likes of Hurricane, Sludge Wave, Flash Cannon, Dazzling Gleam and others.

You just rarely see Future Sight in PvP as most everything competitive that has it (Hypno, Cresselia, Armored Mewtwo, Lugia, etc.) has alternatives that are usually better. But while Future Sight deals very good damage for its cost (and is most definitely worth cranking out that extra bit of energy for rather than Thunder when both are neutral), it IS on the expensive side, especially with Confusion’s very average energy generation.

So to put some numbers behind it, this is why Mesprit and especially Azelf just don’t work out in PvP: poor bulk coupled with average energy generation and expensive charge moves (even more expensive than Uxie, remember) is just not a recipe for success.

Putting it all together now, Uxie’s much better bulk and cheaper coverage move Thunder give it tremendously more success, with more wins than Azelf and Mesprit combined… a double-digit higher number of wins than them combined, actually!

Part of that, of course, is the effectiveness profile of a big Electric move like Thunder, which takes down Jellicent and Lapras and Talonflame and Charizard and Articuno that its Psychic damage alone can not. (And it is the only member of the Lake Trio to beat all those.)

But it also simply outlasts things that Azelf and Mesprit cannot without even needing Thunder… things like Snorlax, Alolan Ninetales, Abomasnow, Gallade, Greedent, and even Politoed (no Thunder needed!) that the other Guardians, again, cannot overcome. And don’t despair too much about being stuck with raid-level IVs (minimum of 10-10-10), as a raid level, Uxie is arguably even better than one with lower Attack, as it does potentially give up Scizor but can beat Defense Deoxys and Armored Mewtwo to MORE than make up for it!

(And there are multiple raid-level IV spreads that get Uxie close to 2500 CP without having to dip into XL candy, including some that get the DD and A-Mewtwo wins so keep that in mind too. 15-15-11, as simmed here, looks pretty good!)

And that continues in shieldless scenarios, where Uxie clearly blows Mesprit and Azelf away, again uniquely beating big names like Gengar, Dragonite, Nidoqueen, Swampert, Melmetal, Lugia, Armored Mewtwo, Charizard, Granbull, Articuno, and sometimes even Skarmory, none of which the other Guardians can reliably defeat.

So that’s all the good news… but that’s also about where the good times end. Unlike Azelf and Mesprit, raided Uxie DOES actually fit under 1500, but even its best isn’t all that hot. It DOES use Thunder to good effect in beating stuff like Politoed, Pelipper, Lapras, and even Azumarill, and uses its big Psychic damage to punish Poisons and Fighters, and overpowers even things that typically plague Psychic-types like Greedent and Melmetal, but it’s still a very small overall win spread that is probably best not messed with.

And on the flip side, while Azelf and Mesprit get big enough to theoretically tangle in Master League (though you want to keep them far, far away from your own roster), even a perfect Uxie maxes out JUST over 2500 CP and just cannot hold up in Classic or Open Master League.

This leads to our TL;DR:

And that’s it for today! I tried to keep it pretty short and to the point (for once!). I hope you’re able to get yourself some Uxie over the next couple of weeks (Lake Trio twins are in raids from Tuesday, September 14, at 1000 to Friday, October 1, at 1000), but if you’re not in the Asia-Pacific region, you’ll have to try to trade for it or make some friends in that slice of the world quickly! I myself am still hoping to land my first Uxie(s) during this event… any of my APAC buddies got an invite for ol’ JRE? Anybody? 🥺

Until next time (likely an analysis on Community Day Samurott once we finally hear Razor Shell’s stats), you can always find me on Twitter with near-daily PvP analysis nuggets, or Patreon if that’s your style.

And thank you for reading… I appreciate your attention and encouragement. Catch you next time, Pokéfriends… stay safe while raiding out there!