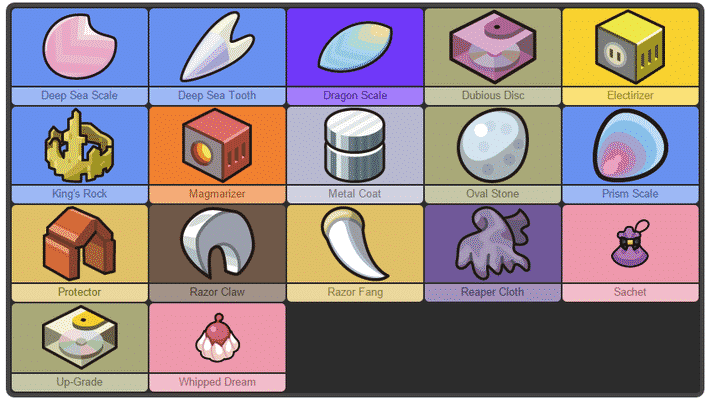 With Generation 4 just around the corner its an idea to become familiar with the Pokémon who are soon to be gracing our accounts, and how they are likely to evolve.

In total 107 new Pokémon and evolutions are going to be added to our client, and within that there are a large number of Pokémon that have required items to induce evolution within the main games.

However, there are also Pokémon which are so far unreleased in Generation 3 which have historically required a similar mechanic.

This article is a breakdown of the Pokémon which currently require an specific item as part of their evolution, as well as those Pokémon which are likely to.

With the second generation, four items were introduced to the game which required specific Pokémon to hold them during a trade to another player. Upon a successful transfer the Pokémon would evolve.

While trading Pokémon to evolve is nothing new, this was the first time we had to include an additional mechanic and in Pokémon Go this was no different.

When Generation 3 was brought in, this theme continued with Clamperl. At time of writing this has not yet been implemented.

In Generation 4 the mechanic shifted again. Items held by Pokémon that leveled up at certain times of day they would evolve. Gligar into Gliscor at night is an example of this.

Currently, Tier 1 (T1) evolution’s require 50 candy and Tier 2 (T2) need 100 candy, in addition to the respective item to induce evolution, but if this is to remain the norm we do not know.

Below is a list of items which are used in the main games for evolution, there is no guarantee they will be implemented into Pokémon Go but with the 4 items we currently have it does seem likely at least some of them will make it. Generation 2 items are included for completeness.

It seems possible to me that the Razor Claw and Fang could be converted into Buddy Distance and night evolution, which would cut down on the overall amount of potential evolution items coming to our clients. If not we are looking at an additional 11 items for our 7 Day Spin bonus over the coming generations.

Items unlikely to make the cut

The following list reflects evolution items which have either already been replaced with other Pokémon Go mechanics, or are unlikely due to the Pokémon involved.

Despite the Chansey family being a staple of the game, my personal view is that I don’t see Niantic implementing a special item for a pre-evolution. It seems more likely that a 25 candy requirement would be applied in line with other egg Pokémon.

The risk of adding items to Pokémon Go is that we only have a single method of obtaining them. To add more items would reduce the ratio we get form each spin, including the 7 day bonus. If you’re one of those unlucky players who gets many of the same item in a row, consider that to obtain a Reaper Cloth, you have to contend with all other evolution item drops each spin.

Currently we have 5 items in the evolution pool. This means that with each spin that produces an evolution item is, at time of writing, a 1:5 or 20% chance of getting the one your after.

A followup article will focus on elemental stones, but im sure you will appreciate that there are also contenders in that category as well which will bloat the item pool further.

This is a quick table of how the guaranteed drop ratio will pan out if the rate and mechanic remains unchanged.

*For the sake of the below table I have included the Dawn Stone as a requirement as it is part of a split evolution.

Here is hoping that if more evolution items are introduced, then either the drop rates increase or a new mechanic is added for obtaining items. My own theory on a new mechanic can be found here, but as a concept by no means a sure thing.