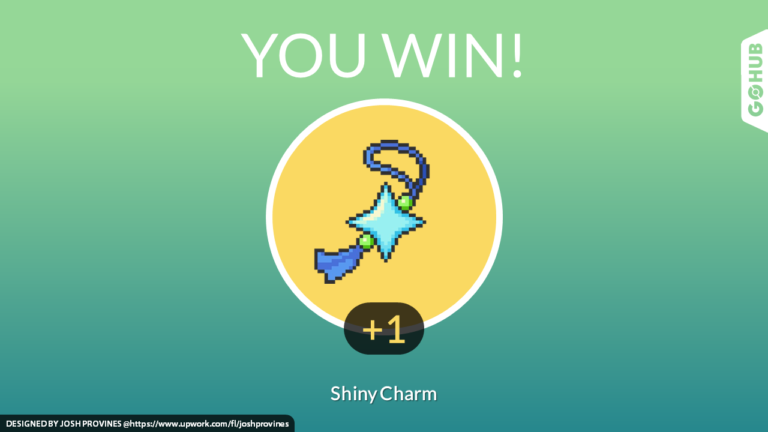 Trainers, We all know that Shiny Pokemon in Pokemon Go are a highly coveted prize (even if some of them aren’t that useful, but make spectacular trophies!)

So….what does it do exactly? And how is it linked to Shiny Pokemon?

Well, once you have obtained the Shiny Charm, your chances of encountering a Shiny Pokemon by various means is increased by 3x. Yes 3x! This means that instead of a base rate (in the later games) of 1 in 4095, you can instead enjoy an improved rate of 1 in 1365. If you use whats called “The Masuda Method” to breed Pokemon using a foreign Ditto or Pokemon, the odds are increased again to 1 in 512. You can read my article on Pokemon Breeding and how it could be implemented in Pokemon Go here.

How would it relate to Pokemon Go?

There has been a lot of speculation about how the Shiny Charm could be implemented into Pokemon Go and one of the most promising methods to obtain it could be through Medals.

This isn’t such a stretch as we have seen in the last 6 months or so, cosmetic avatar rewards linked to certain medals such as the fisherman gear linked to the medal for catching XL Magikarp.

We have also seen the Kanto medal linked to the Special Research quest for Mew. This means that its entirely possible for Niantic to link the gold region medals to enabling an improved shiny rate (it doesn’t necessarily need to be 3x.)

So medals could mean an improved Shiny Rate?

In a word, yes! This is the route that Niantic could take to implement it into the game with very little work. It would work very similarly to how the bonus catch multipliers work when having a bronze, silver or gold type medal to help catch Pokemon.

The below chart shows how each regions gold medal could improve the chances of finding Shiny Pokemon from that region:

The Shiny Charm being introduced into the game would certainly be a welcome addition. Although the is no knowing if Niantic would ever implement something like this into the game, it would increase replay-ability. The Shiny Charm is one of the reasons that Shiny hunters of the main series games keep playing!

We think it would be warmly received by the whole community and would take very little work to implement. That’s got to be a win/win for Niantic!

Trainer, let us know your thoughts in the comments!