Defender Decay is the loss of motivation a Pokémon faces when they are defending a gym over time. There are ways that can hasten or lengthen the rate of defender decay, so let’s take a closer look at the inner workings of what keeps or kicks a Pokémon in or out of a gym.

Per the Defender Decay bug fix in late July last summer, the rate of decay seems to be scaled to the CP of the defender. Within a short time of the bug fix, Reddit user kk5566 developed a testing formula for the rate of decay per hour, and Reddit user melts10 plotted the formula in terms of percentage of CP lost in relation to % of original CP: 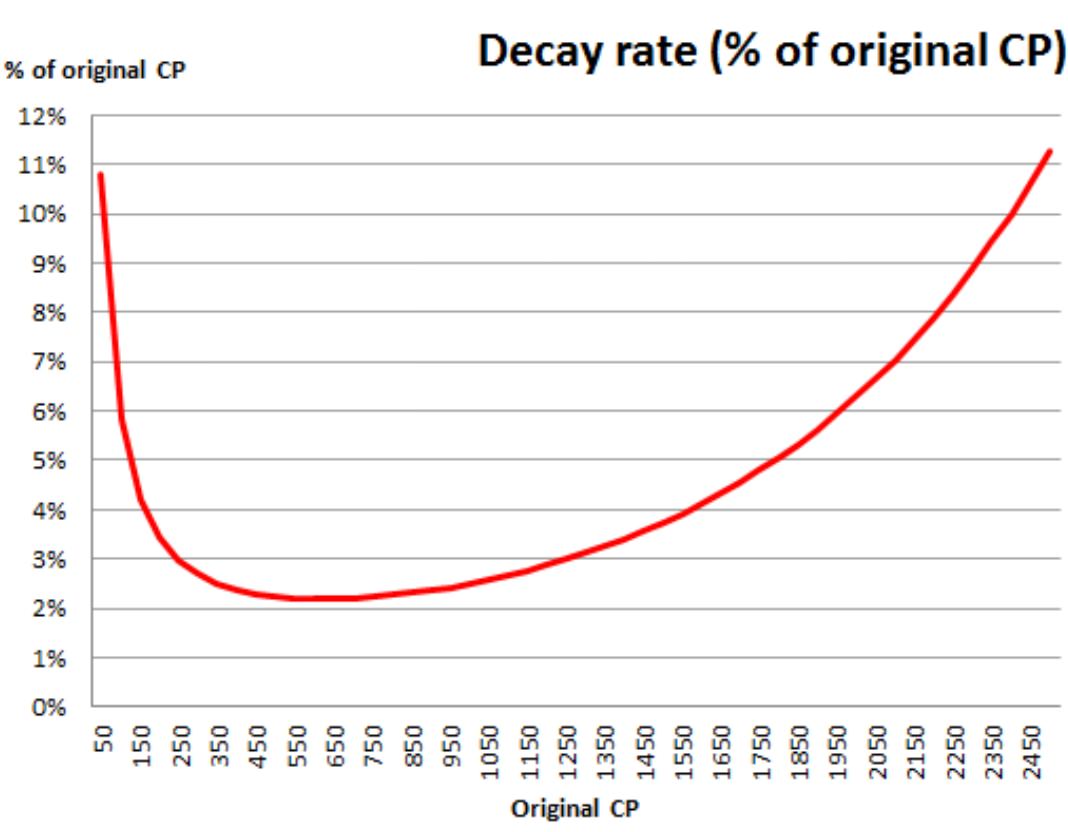 However, there seems to be a threshold to that formula. Any Pokémon with a CP of approximately 2300-2500 (or more) seem to lose no more than 10% of total CP per hour. Reddit user DrThod_PokemonGo provided some examples. The whole table can be found here.

Note that any gym defender (regardless of CP) will lose 8% of their total CP when put into a gym, so to get the most time from your Pokémon, be sure to berry them up! Which leads us to our next section…

Berries are a gym defender’s best friend. With Golden Razz Berries now being given away aplenty as a reward for successfully completing a raid (For more information about Raid Rewards, click here), gyms can remaining standing for days at a time (GR’s completely fill a defender’s motivation meter, remote feeding or otherwise).

(Note: Feeding a berry via long-distance feeding reduces it by 25%. Those values have been added into the table by Go Hub. The original table can be found from GamePress here, though the total value for the Nanab Berry has been corrected).

Example, if the first berry you feed to a defender is a Nanab Berry, and the next berry is a Razz or Pinap Berry, you will receive 15% plus 4.8%, for a total of 19.8% motivation refilled. Even though you used different berries, it will not reset to ‘Berry 1’.

Become familiar with how much decay has happened to a Pokémon by eyeing their motivation meter. As in the image below, Alakazam, Aerodactyl, and Walrein all have near completely to completely empty motivation meters, requiring only one round of battle. A full meter requires three rounds of battle, like the one above Lapras. Meters that hover around the half-way mark, as with Rhydon and Kingler, usually take two rounds to knock out.

A successful attack against a gym defender will lower their motivation meter by 28%/29%, while an unsuccessful one will lower it by about 2%.

Other trainers can feed berries to Pokémon while you are attacking. The main culprit is the Golden Razz Berry, which upon feeding will require another three rounds of fighting (if it does not error you out of the gym first).

Other members of your team can feed berries to gym defenders, even if their Pokémon are not defending the gym. In the event of an EX raid, it is common practice to Golden Razz Berry a gym till the EX raid egg hatches, so that a team can maintain gym control for extra balls.

One person can feed a maximum of 10 berries to a defender, but can do so to all six defenders.