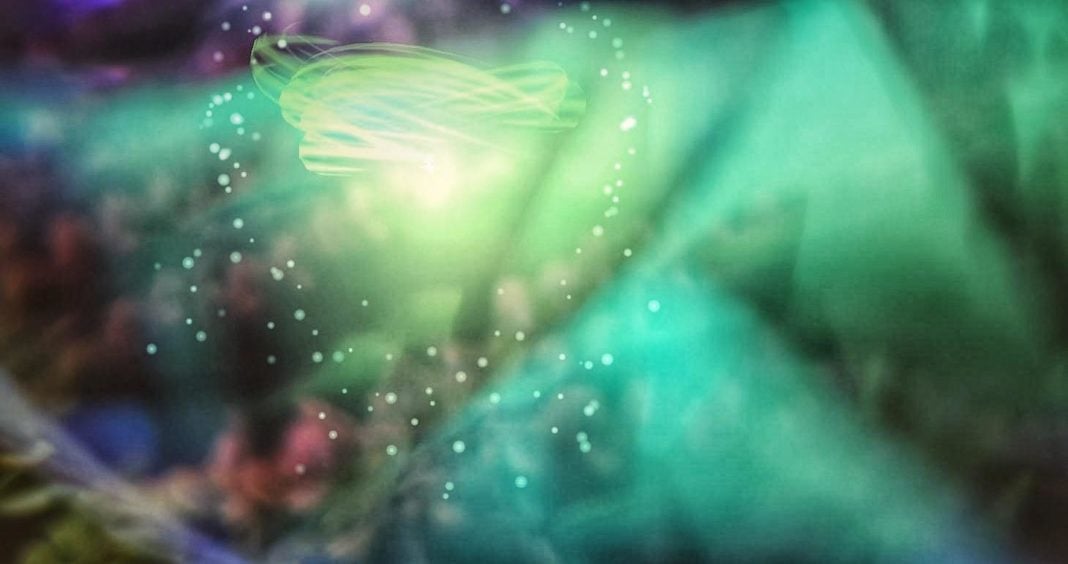 There are many features we’d love to see added or improved on in Pokémon GO, and an often neglected area that could be worked on is the game’s AR modes. From improvements to totally new game mechanics, here are some ideas we have for improving AR in Pokémon GO.

Did you know that photographing a Pokémon that is wild, vs a Pokémon that has caught, gives you access to different animations? We have an article talking about the differences between the three different AR modes here. In wild AR, so entering the AR photo mode via the capture screen, rather than via your Pokémon storage, the attack animations are different, and in many cases, much more animated and fun to photograph, than the attack animations in GO Snapshot AR mode when you have caught the Pokémon.

For example, in the wild mode of AR, Hitmonlee does an amazing spinning kick, but once caught, their attack animation is instead a dramatic arm related lift and pose. The spinning kick is so awesome, but once you’ve caught that Hitmonlee, you can’t access it again. Taking photos of Pokémon in wild AR mode comes with risks, if the Pokémon despawns, it will flee when you return to the capture screen, so you have to assess if you want to risk it or not. One way to sort of getting around this (but with limited Pokémon options) is via research tasks from Pokéstops. You can photograph Pokémon from research tasks in wild AR mode, without the flee risk!

For Delibird here, the black background is the caught AR mode animation, you get the classic ‘lean in and roar’ type attack that most Pokémon have a variation on. In the other two images, we have the wild animation that can be photographed; a jump, and a much more interesting attack. Here instead of a generic roar animation, Delibird’s attack animation is much more specific to Delibird, it reaches into its sack and mimes throwing a present, and therefore more interesting to photograph. 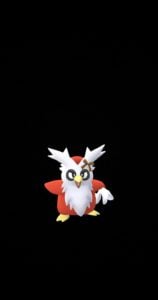 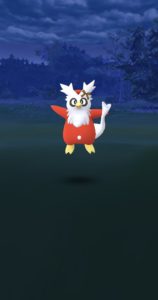 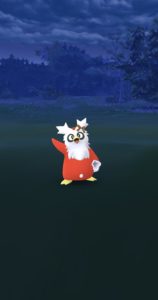 With some Pokémon impossible to photograph in wild AR, because they simply don’t spawn in the wild, like baby Pokémon and Pokémon that evolve with items, there are plenty of attack animations we never get to see. We’d love to see these wild attack animations added into the GO Snapshot AR mode so the Pokémon can be photographed with them without the risk of losing them. 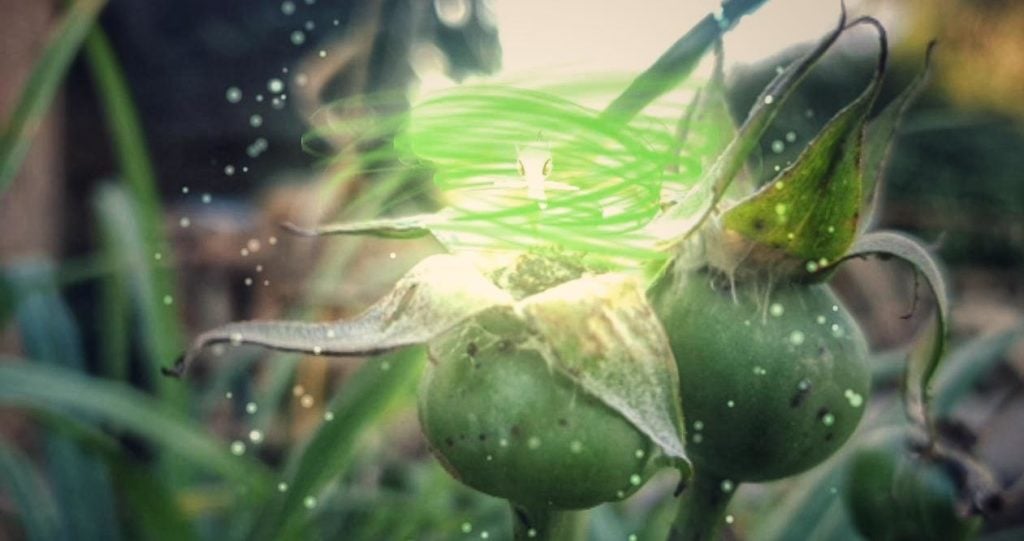 The research quest lines for Mythicals have given us some really unique animations that we have been able to photograph in AR mode, but only in wild mode, not once caught. Mew turned transparent when invisible, and Celebi has its famous swirls and Mew goes totally invisible. For many AR photographers, what this means is that we haven’t caught our shiny Celebi. I’ve completed the questline, but have no intention of catching it anytime soon, because that would mean I lose access to this incredible swirl animation. I photograph Celebi, then hit the flee button, ensuring I can photograph that animation again another day.

This means when the shiny Mew quest is released for the Kanto Tour event, we might get stuck, because we won’t be able to have two uncaught special research quest Mythicals that we can access at once. So we either catch Celebi in order to photograph Mew repeatedly, or we leave the Mew quest unfinished so we can keep photographing Celebi. If these animations were available in GO Snapshot, it wouldn’t be a problem!

With even the highest quality new model smartphone, GO Snapshot seriously struggles at night. The quality is drastically lower than a photo you take in your regular camera, and it makes photography Pokémon at night much trickier. It is hard to get a Pokémon to spawn in as the mode struggles to recognize flat surfaces, and then the actual image is much grainier than your phone would normally be in that situation. 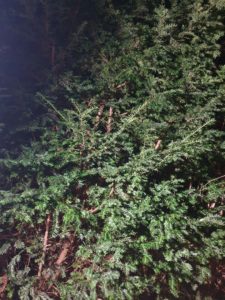 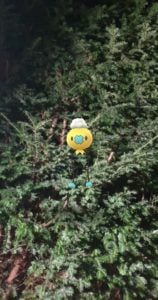 These two quick photos were taken in the same place within seconds of each other, both with the exact same street light lighting the bush, and both on my Samsung S9+ phone. As you can see, there is a drastic difference between the two. The AR photograph with Drifloon is much lower quality, the bush is so grainy that the details are all but lost.

There are so many Pokémon that it would be cool to photograph at night, and so many concepts that better lend themselves to a darker setting, but it is incredibly hard to have that same quality in low light.

This is one that is definitely a long term project, but improving the AR Blending mode would be amazing. AR Blending is a setting in AR (available on certain models of phones) that allowed Pokémon to be partially hidden behind objects, rather than appear always in front of them. It is fairly new, having had a slow roll out to compatible devices, and as an avid AR photographer, it just isn’t something I use much. 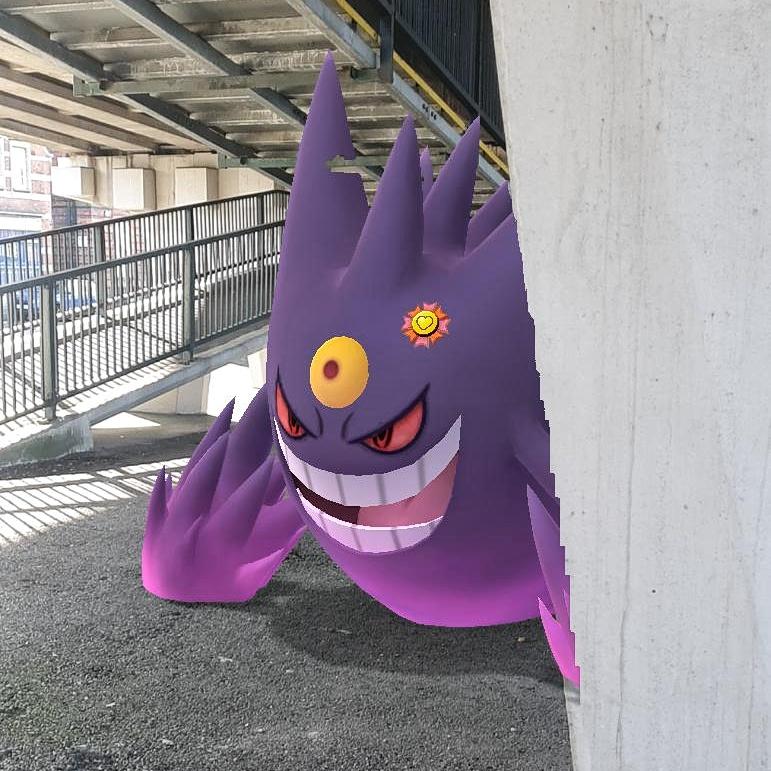 I tend to find the edges of the Pokémon and the object are very pixelly and jumpy, taking away from the attempted realism of AR. You can see in the Mega Gengar image above, that the wall makes a really jagged edge, and part of Gengar’s head spikes has just vanished. 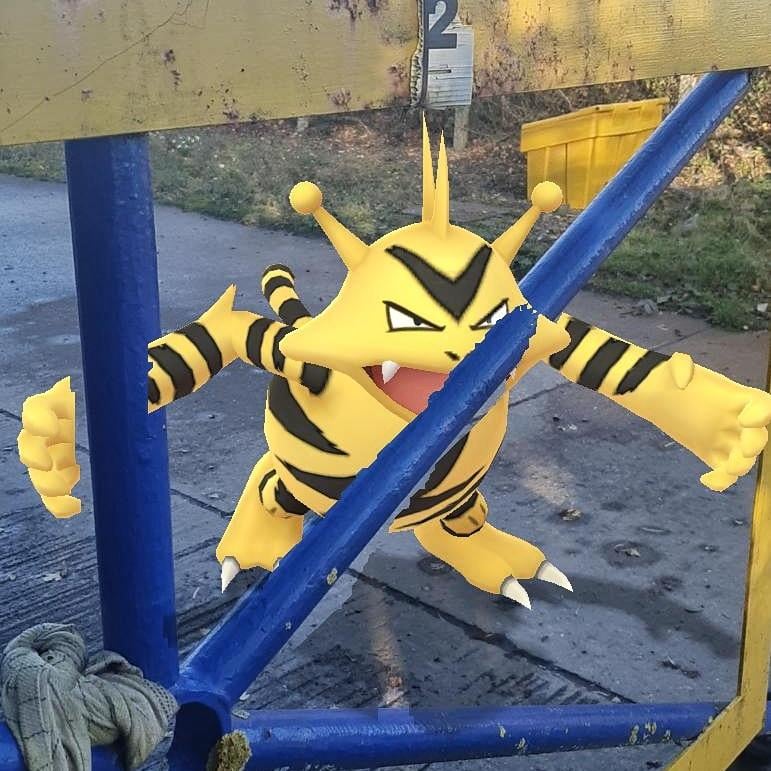 Poor Electabuzz has a not very attached hand and a railing trying to through his face. Oops! Currently AR blending requires quite a plain location to work, it means the technology is less confused trying to find the obvious parts of the location that should be in front of the Pokémon.

AR Blending is a technique that needs patience and time, both to use, and in it’s development. AR is such a new thing, and Niantic has made a lot of acquisitions of AR companies in recent times, and we can’t wait to see how AR Blending will be affected by this. 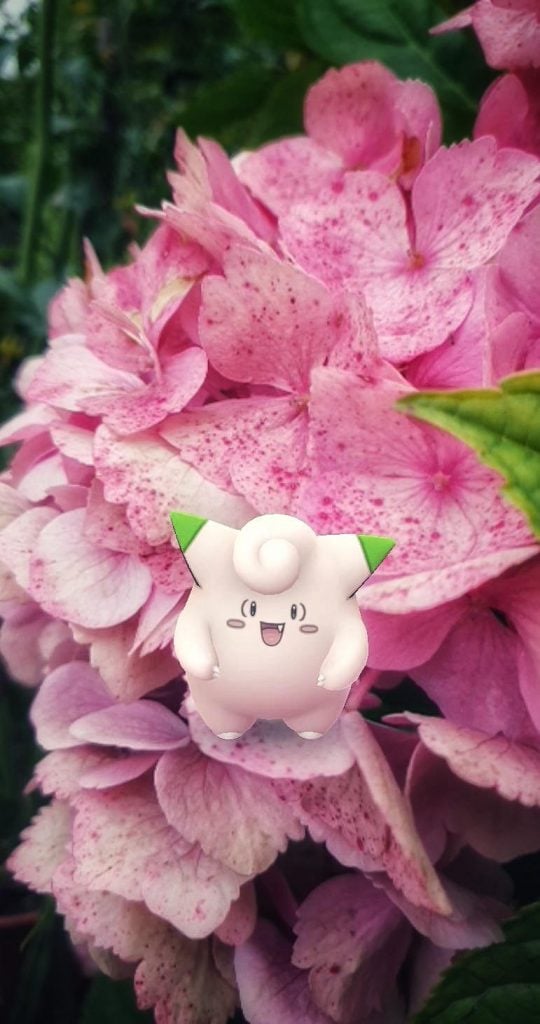 Not all phones have access to Niantic AR, meaning for many, standard AR, in which the Pokémon appears only in a fixed position on the screen, is viable. You can absolutely take beautiful photos without access to Niantic AR (in fact, we have a whole article dedicated to just that), but there are easy adjustments that could be made to improve it.

Being able to turn a Pokémon to look in a different direction, rather than directly into the camera lens, would make such a difference! The attack animations can help as the Pokémon will move and some do move away from the camera (like Snivy below), but most just stare straight forwards. 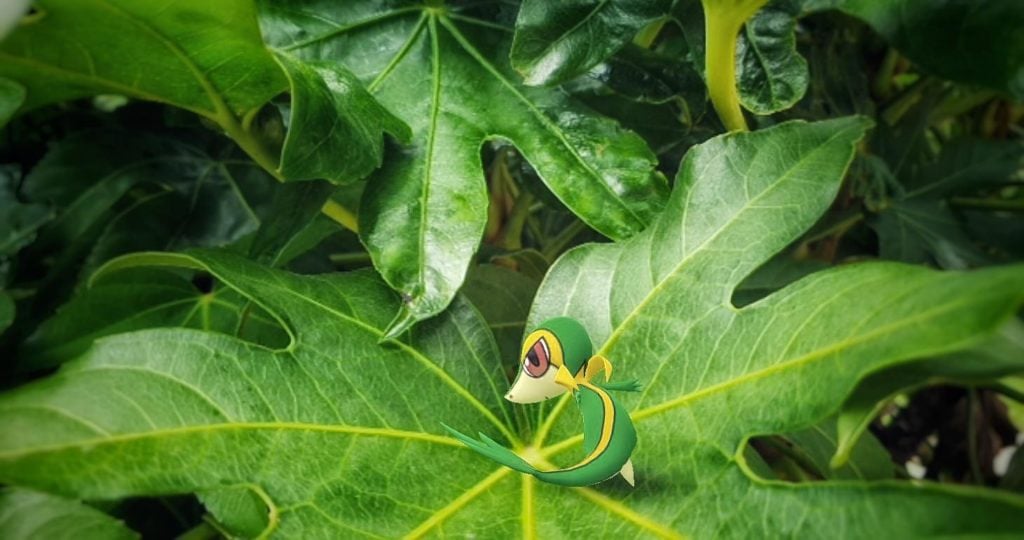 Currently standard AR mode also no longer seems to be compatible with your phone in the landscape position, many people’s preferred augmentation for taking photos. Previously when you turned your phone to the side, the Pokémon moved too, allowing me to take the Snivy photo above. Now the Pokémon stays still, meaning it is sideways, which is rather frustrating! I’m not sure when this option was removed, and I’d love to see it brought back.

To switch between AR Modes currently, you have to go into your settings and click ‘Niantic AR’ on or off. It would be really cool to have a quick toggle button in AR mode itself to make this change super quick!

There are times this could be really useful, and it means that if you go from taking AR photos to feeding your buddy, you can switch back in the click of a button, rather than having to go back into the main menu, then settings to change it.

It could be added underneath the AR Blending toggle in the top right corner for ease of use, and then you can happily switch between the modes easily. There are plenty of great reasons to not exclusively use Niantic AR (formerly AR+) as we talk about in this article, so being able to easily switch would be a great little quality of life update.

The images we take in any of the AR modes don’t reflect what the cameras in many photos are actually capable of. There is more grain, less detail, and just a generally lower quality image than the regular camera on your phone may take.

This becomes less obvious the better your phone is, but it is noticeable. This is because rather than taking a photo, AR modes actually take a screenshot, so the quality reflects that instead. As AR technology improves we hope this is something we see change too, many phones now have incredible cameras within them, and they aren’t being fully utilised under this current method of AR as screenshots instead of photographs. 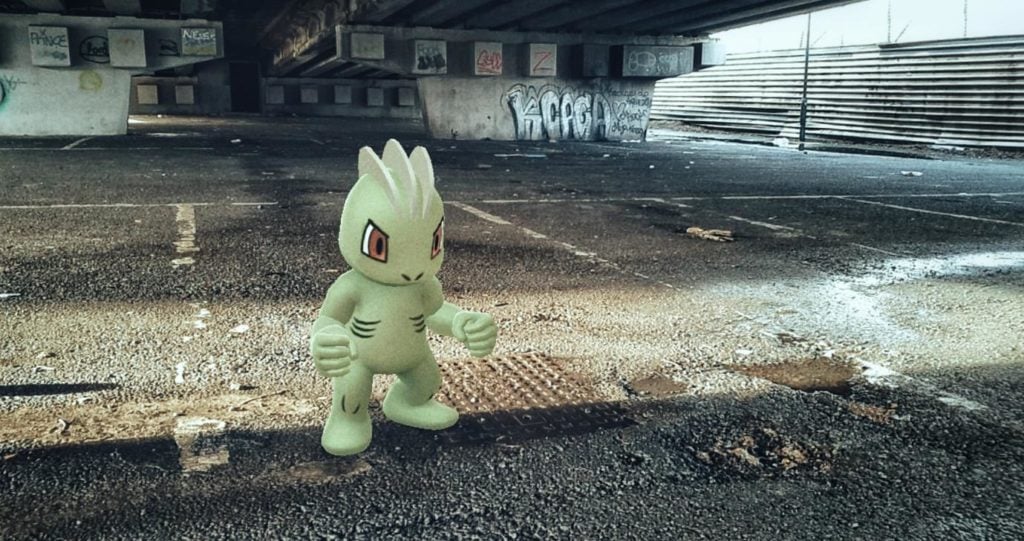 There are so many things we’d love to see, and these areas are all aspects of AR that could be improved in the long term. It is a feature that is often neglected the community at large, but much like PVP, it has a really dedicated core of users that love it and can’t wait to see it grow.

While you may not partake in AR, there is a huge community of incredible AR photographers on social media, and you can check out a lot of their amazing work through our hashtag #GOHubAR. Maybe it’ll inspire you to check out a side of the game you haven’t used before!