Rayquaza is Coming Back for a Special Raid Weekend Event! 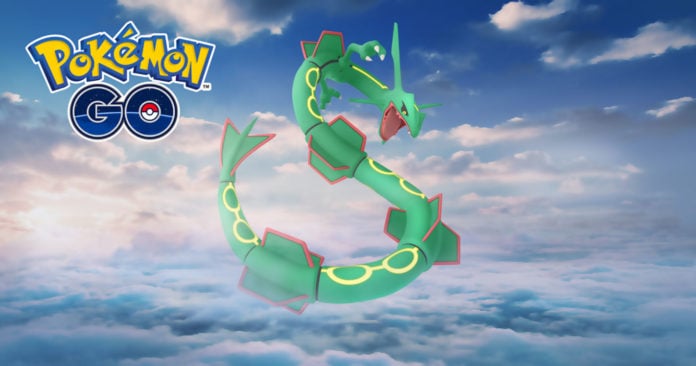 Rayquaza Raid Weekend is a special Pokémon GO themed raid weekend taking place from March 15 to March 18, 2019 (next Friday to Monday). During this weekend, the Legendary Pokémon Rayquaza will be joining Raid Battles as a Tier 5 raid boss and you’ll be able to challenge him once again! We already have a fully updated guide on Rayquaza counters which should come in handy.

And before you ask, Niantic has assured us on multiple occasions that a shiny Rayquaza won’t be a part of this weekend. We share your pain. Let’s see what has changed since the last time we got a chance to raid Rayquaza.

As we already said, the in-depth version of this is available in our Rayquaza counters guide and you should definitely bookmark that page for the upcoming weekend. Let’s quickly go over what has changed in the meta since February 2018 when Rayquaza was first introduced.

Here are the all-new Rayquaza counters we didn’t have in 2018:

Firstly, Ice types have a much better representation nowadays, with Mamoswine leading the pack. It’s completely reasonable to expect that you will have a full Mamoswine team going into this weekend.

Mamoswine is incredible versus Rayquaza, especially when you consider that our previous best options were Articuno and Cloyster. Not only is it the fastest, but it’s also the bulkiest and the most reliable Rayquaza counter. There is really no reason to overthink it: Mamoswine is your go-to option. Even if you have Stone Edge / Ancient Power as your charge move and Powder Snow as fast move, you’ll still be able to be a useful member of your raiding group. Although we don’t advise this for duos.

Weavile is a high DPS Gengar-esque option – high damage output, but it will die more frequently than a Mamoswine or a Mewtwo. Speaking of… Mewtwo with Ice Beam is also a new option which performs better than most of the stuff we had access to in 2018. It’s better than Articuno, Cloyster, and Regice, which is not really hard.

Difficulty-wise, the raids should be way easier than in 2018 and we expect a lot of Rayquaza duos to pop up, mostly featuring teams filled with double-Ice moveset Mamoswines. It really isn’t a difficult fight, especially against Ancient Power. Outrage is still the most difficult match-up.

Here’s a team template we would use against Rayquaza in 2019, given that these Pokémon are Level 20+:

If you’re pushing for duos, make sure that all of your Mamoswines have Powder Snow and Avalanche and that they are around Level 30. In that case, go with a full team of Mamoswines.