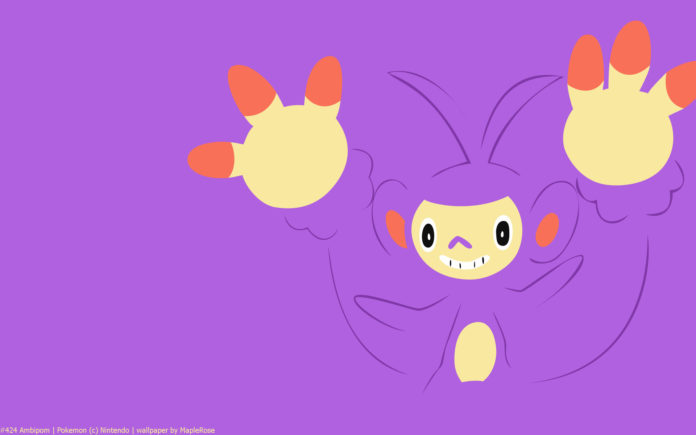 Pokémon GO Ambipom is a pure Normal type Pokémon which has a disappointing MAX CP of 2218, paired with an ATK of 205, DEF of 143 and STA of 150. This puts it as the seventh best attacking Normal type in the game behind Slaking (based on sheet attack value), Porygon-Z, Ursaring, Staraptor, Dodrio and Zangoose.

Ambipom evolves from the previously introduced Pokémon Aipom, released in Generation 2. It will likely take fifty candies to evolve, and in the main series of Pokemon games, it required you to level up an Aipom that knew the move Double Hit (a move it learnt at level 32).

Slaking will remain the Pokemon with the highest base attack stat, but Porygon-Z will take over as the best Normal type attacker in the game when gen 4 releases. Ambipom will slot in at number 7, ahead of the likes of Tauros and Snorlax.

In this chart, we will look at its viability as a Normal type Pokémon and how it sizes up to some of the other popular Normal types in the game.

Overall, the Normal types come up a bit short in the Attack and Defense department. Slaking has, by far, the highest CP — but the fact it can only use its Charge attack renders it basically useless for raids or gym defense. On the other hand, Snorlax remains a fairly consistent bulky defender with its super-high HP.

When it comes to raiding or gym defense, you will definitely be reaching for your optimal counters and may only ever use an Ambipom to add some colour to a bland gym. In short, it will not have a place in the future Metagame.

As for Ambipom itself, it will only take super-effective damage from Fighting type moves, but it’s not very strong to begin with. On the other end, it will be immune to Ghost type moves.

Though there is no way to know for sure what moves Ambipom will have, we can look at its main series movepool, as well as the moves other high end Normal types already have access to, and we can compile a list of possible movesets for it:

The chart below will help you visualize what weather is beneficial or harmful for Ambipom.

It is unknown when shiny Ambipom will be available, as shiny Aipom is not currently in the game.

Ambipom’s Pokedex entries from various games give insight as why it is called the “Long Tail” Pokémon even though it needs no explanation.