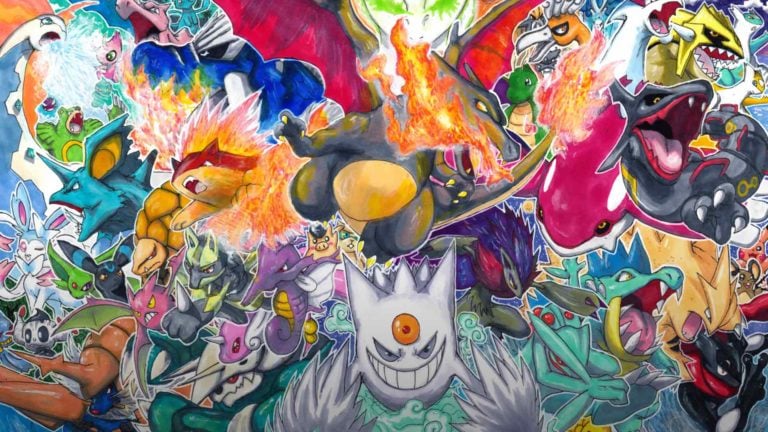 Shiny Pokémon are coveted collector items both in Pokemon GO and in the core game series, however it can’t be denied that shiny sprites of some Pokémon look rather bad. From mismatched color schemes, to simply unpleasing color palettes, we’ve always wondered why some older shiny Pokémon look the way they do.

Luckily, an excellent video by KangasKid18 goes into details about the mechanics and algorithms behind shiny Pokémon colors, explaining why some shiny sprites in Pokemon Go look “worse” than others and why Niantic can’t really do anything about it:

How shiny Pokémon colors are designed

Gold and Silver were the first games with shiny Pokémon. Due to technical and memory limitations in Gold and Silver, a Pokémon was colored with nothing more than a color palette consisting of 1-2 colors on top of black and white.

In the early days, Gamefreak would simply switch the color palette of a Pokémon to a next suitable one in the game’s code, resulting in similar shiny variants for different Pokémon (Clefable and Wigglytuff for example).

Later games removed all the color restrictions Gold and Silver had and Pokémon could have dozens of colors, but Gamefreak stuck with the “change the color palette” method for five generations.

When the games entered the 3D era, Gamefreak had complete freedom to create shiny Pokémon, but they decided to stick to the same principle as before: shiny forms change all of the colors of a Pokémon, rather than just distinct featured colors.

In Sun and Moon, this changed and Gamefreak started deliberately designing shiny Pokémon, which resulted in shiny Pokémon that look and feel completely different than shinies in earlier games.

What does this mean for shiny hunters?

Well, put simply, it means that Neither Niantic or The Pokemon Company had proper control over the colors that were picked for the shiny sprites until Generation 6 of Pokemon. It wasn’t until they had control over 3D sprites of each Pokemon did they become able to choose specific colors for their Shinies.

Too many times have I heard and seen people complain about the “dumbness” of Niantic for not making a certain shiny a specific color or “why didn’t they just change the color.” Too many players are ignorant about the reasons as to why shinies are the colors that they are and need to know that it’s not something that can be changed. Those of you who have played the main series Pokemon games or have an interest in shiny hunting will know that some of the sprites in the upcoming Gen 5 look incredible but those in Gen 6 and 7 look increasingly better.

The easiest way to visualize what I mean is to see the below chart.

This shows that The Generation 1 Pokemon Gengar has a nearly unnoticeable shiny form, but when you look at the shiny Mega-version (introduced in Gen 6), you can see that it is entirely different and much, much better in most people’s opinions.

The Good, The Bad and The Ugly

Even before I understood how some sprites were formed, I always knew that there was a particular reason why some sprites weren’t a bit more impressive. I’ve always said that “if you can’t tell that its a shiny, why hoard loads of them?” or even “why have it at all?.

I have a friend in my local community that managed to get a Shiny Gastly from a research task – Foolishly though, he evolved it to Haunter and used it as his Buddy. But because no-one could tell that it was shiny, he had to nickname it “ShinyGhost.” This, to me, seemed like a perfectly good waste of a Shiny Gastly!

The story ended well though as a few weeks later, he managed to get another Gastly from Research, and I can safely say that the second one wasn’t evolved.

That being said though, There are still some Pokemon from the earlier Gens that look good even though their shiny colors weren’t picked by hand such as Shinx, but others like Seel or Weavile leave players wondering “why?”

I, for one on multiple occasions, have been guilty of playing Pokemon Go at the start of a new event when people around me have complained about how stupid Niantic was for making terrible shiny sprites. I did not put these people right about the fact that it is not Niantics decision about the colors of the Pokemon’s Shiny Sprites let alone the fact that even The Pokemon Company didn’t specifically choose the shiny colors until Gen 6 was released. Instead, I would say something like “you think that ones bad, you should see Seel’s” – Which hasn’t helped people to understand.

I hope that this article will “lift the lid” on why the first 5 Generations of Pokemon shinies are the way they are. If you read this and hear people complaining about Niantic and the colors of certain sprites, you too can help explain that it’s out of Niantics hands.

If you really want to start seeing some sprites with more thought put in, you’ll probably have to wait all the way until the second part of 2020. Until then, though, let’s appreciate some of these alternative colored versions knowing that it wasn’t their fault.