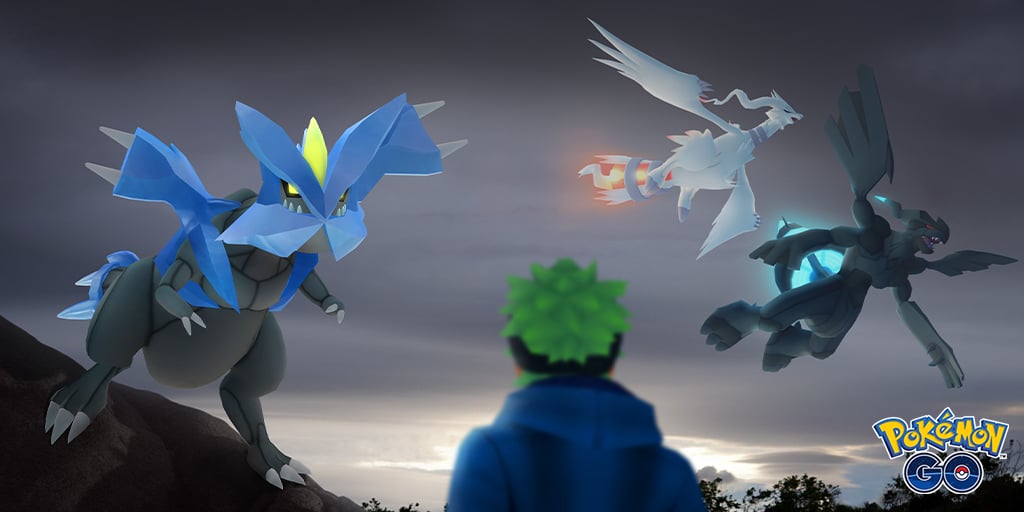 With the relatively recent announcement that these three legendary Pokémon will be making their debut in Pokémon Go, we felt it prudent to have a look at the Trio, where they stack up against each other and the meta in general.  We’ll also talk about Pokémon that will effective against all three of these legendaries, so you have some worthwhile options to spend that hard-earned stardust on.

Legend states that Zekrom and Reshiram originated as a single powerful Dragon Pokémon, so it shouldn’t surprise you to learn that both of them have the exact same stats, and wow are they impressive.   With an incredible attack stat of 275, very respectable defence and stamina both Zekrom and Reshiram boast the stats to become very meta relevant.  Kyurem is no slouch either, while it doesn’t boast the stat spread of the other two it is stat-wise one of the better Ice-types in the game.

Let’s start with Zekrom, who has been blessed with excellent two move-sets.  Dragon Breath / Outrage is a solid dragon-type move-set and Charge Beam / Wild Charge is a fantastic electric-type move-set.  If you’re planning on using Zekrom in the Master League of PvP, then Crunch has some value, as Zekrom a dragon-type with access to a dark-type move.  Flash Cannon is a throw-away move that will make swapping between Outrage and Wild Charge a risky endeavour if you’re looking to specialize your Zekrom for a specific situation.

Reshiram has moves that are just as interesting.  Reshiram has Dragon Breath / Draco Meteor as a dragon-type moves-set and Draco Meteor outperforms Outrage, so Reshiram gets a slight advantage there.  Reshiram also comes with an excellent Fire-type move-set in Fire Fang / Overheat.   Stone Edge and Crunch could prove useful as PVP moves.

Kyurem was not as fortunate as its counterparts.  While it was given an excellent dragon-type move-set, it’s Ice-type moves leave something to be desired.  It has no Ice-type quick move and was stuck with Icy Wind as its Ice-type charge move.  This lands it more than 3 DPS points behind Mamoswine on the Ice-type DPS scale, even further if you factor STAB into the mix.  Perhaps in a future release Kyurem will get access to one or two better moves, until then it’s more useful as a Dragon-type.

Both Zekrom and Reshiram have excellent value as Dragon-types and as Electric / Fire types respectively so you really can’t go wrong either way.   It is well worth the investment to unlock the second charge move on at least the best of one of each so you can bring along their respective Dragon charge move and give Zekrom Wild Charge and Reshiram Overheat as well.   Then based on the situation they are only a quick Fast TM away from having a dual STAB super-effective move-set.

I don’t remember the last time we had three legendary Pokémon released that can shake up the Meta quite as much as these three will.  Zekrom and Reshiram are both extremely useful as both Dragon types and their respective secondary types, while Kyurem is limited in its use as an Ice-type.

*Note that these rankings include ALL of Generation 5 Pokémon.  This includes Pokémon that have not been released.  To see the actual rankings in the GoHub database, click the links in the tables below.

Zekrom is currently not ranked on pvpoke.com.

In the Ultra league Zekrom beats Mewtwo straight up, but losses when down a shield, it beats Swampert, Giratina Altered, and Registeel with a 1 shield advantage and Cresselia with a 2 Shield advantage.

In the Master league Zekrom wins against Mewtwo, Palkia and Togekiss straight up, but losses when down a shield.  Beats Giratina Altered Forme, Fire Punch Groudon and Dialga, but only with a shield advantage, loosing in all other scenarios.

In conclusion, for PVP, there are other better options in both leagues.

Reshiram is the best of the three, as they have more value as a Dragon-type attacker and as a Fire-type attacker, with its Fire-type move-set doing more neutral damage than anything either Zekrom or Kyurem can use.

Reshiram ends up with a slightly better Dragon-type move-set then Zekrom, so it lands 4th on the DPS list 1.08 behind Rayquaza and 3rd on the TDO list landing behind unreleased Arceus and Kyurem (Black).  Making it #1 of all currently available Pokémon, 34 points ahead of Garchomp.

Reshiram is the only one of the three with rankings on pvpoke.com, coming in 61st overall in Ultra League and 11th overall in Master League.

In the Ultra League Reshiram wins against Cresselia, Swampert, Giratina Altered, and Registeel with a 1 shield advantage.

In the Master league Reshiram wins against Palkia, even when down a shield and against Giratina, Groudon, Mewtwo, Dialga, and Togekiss with a shield advantage.

While Reshiram is the highest rated Dragon-type Pokémon with access to Crunch, there are other better options in both leagues.

Kyurem’s value ends up being an Ice-type.  It’s DPS is only 0.54 behind Mamoswine for the top spot among currently available Pokémon, Kyurem’s White and Black versions blow both Mamoswine and Kyurem out of the water so be mindful of that.  Kyurem’s TDO is first among currently available Pokémon, and 3rd overall.  69 points above Regice, and 79 points ahead of Mamoswine.  That said, Kyurem is 294 points behind Kyurem Black.  So, until Kyurem Black and Kyurem White are released Kyurem is a very solid Ice-type.

Dragon-type wise, Kyurem is far down the list of viable Pokémon.  3.2 DPS points behind Rayquaza, and 129 TDO points behind Reshiram.  To put it in perspective, its TDO is behind Latias.

Kyurem is currently not ranked.

In the Master league Kyurem wins against Mewtwo, Giratina, Togekiss, and Groudon when up a shield, and against Palkia when up 2 shields.

Much like Zekrom and Reshiram, there are better options.

Here is a shortlist of Pokémon that are viable counters against two, or three of the Legendaries.  Being that all three are Dragon-types, it’s not a surprise that Dragon types are high on the list.  Reshiram and Kyurem share some good counters in Rock-types.  Zekrom is the outlier of the three, with only the Dragon-types shared as good counters.

Good Against All Three

Good Against Reshiram and Kyurem

Zekrom and Reshiram are both meta-shattering Legendary Pokemon and should be raided as often as possible.  With viable move-sets for both Dragon and their secondary types, they can both be useful against a wide range of other Pokemon in both raids and gyms.

Kyurem is an excellent Pokémon in its own right, while it lags behind Zekrom and Reshiram in stats, and lacks a solid Ice-type move-set it’s still worth it to grab a few ones with good IVs.

In PVP there are better dragon options, but Reshiram or Zekrom with Crunch could prove useful in some situations.

My advice is to grab as many of all three as you can, grind out as many candies as you can and power up the highest IV ones you can get your hands on.  Zekrom and Reshiram in particular will be viable Pokémon for generations to come.

As always, stay safe out there trainers!