Trainers, the wait is now over. Lugia’s signature move (Aeroblast) was just pushed to the GAME_MASTER file! Many trainers were wondering how good this move might be ever since it was first announced back in March, so let’s see if it was worth the wait or not…

Disclaimer: Aeroblast stats are subject to change before the official release, so please keep that in mind. In fact, they were changed between the time I originally wrote this analysis and now, so it might happen again

First of all, let’s take a look at Lugia’s stats in Pokémon GO:

Lugia has one of the best DEF stats in the entire game, period. However, its ATK stat is a bit too low to shine in the PvE meta. For reference, top-tier attackers usually have 250+ ATK and a great moveset, so it’s not looking too good for Lugia in that aspect, even if Aeroblast is a very good move. We’ll see.

On a side note, make sure you have enough people to take down Lugia raids. As you may already know, Raid Boss HP is fixed for each tier, so the stat that matters the most when estimating how many trainers will be needed to take down a raid boss is the DEF stat, and Lugia’s is massive. Check out our Lugia Raid guide!

Let’s get straight to the point: Aeroblast is a VERY good charge move in Pokémon GO.

Aeroblast has a 100 energy cost, so it’s a one-bar move (or a full-bar move, whatever you want to call it). Its base power is 180, which is absolutely insane, and the duration is not bad considering how hard this move hits. In fact, it’s a Solar Beam clone… but 1.5s faster, which is crazy!

One of the most used metrics to compare charge moves is DPS*DPE, which measures how good a move is both in terms of damage per second and energy efficiency. Well, Aeroblast has a DPS*DPE of 95.29. That’s very, VERY good. Like, almost on V-Create, Precipice Blades & Origin Pulse’s level of good.

I’m not a huge fan of 1-bar charge moves because you are likely to waste some energy when firing it off if you don’t dodge or manage your energy properly. However, Aeroblast’s stats make up for that.

But the question is: will Aeroblast Lugia really be a top-tier PvE attacker? The answer is probably not. Unfortunately for Lugia, its attack stat is a bit too low to shine in the PvE scene. And even if it got access to Gust (it can only learn Extrasensory and Dragon Tail as of now, none of which are amazing options for Lugia) it wouldn’t shake things up too much, but it’d definitely be an improvement (Niantic, pls add Gust to Lugia’s movepool). In fact, it ranks below common birds such as Staraptor, Honchkrow, Unfeazant (and of course top-tier attackers such as shadow Sky Attack Moltres and the flying Megas). The difference between Moltres’ attack stat (251) and Lugia’s (193) is probably enough evidence of why Lugia can’t beat the best flying type attackers in the game.

BUT, and that’s a big but, Lugia’s TDO is so high that Aeroblast makes it somehow usable. When combining DPS and TDO, Aeroblast Lugia is in fact a solid choice (still significantly worse than shadow Sky Attack Moltres and the flying Megas, of course) for those trainers who are running low on resources or want to wafu raid without worrying as much about the number of faints, but that’s about it.

Another thing you have to ask yourself is: how relevant are flying-type attackers in Pokémon GO? If you want to take down fighting, grass or bug type raid bosses, you just use other attackers such as Psystrike (shadow) Mewtwo, Sky Attack Moltres or Reshiram instead. In fact, the only time flying type attackers have been useful is in Virizion raids (and that’s because Virizion has a double weakness to flying type moves), so keep that in mind.

To sum up: Aeroblast is a very good move, Lugia’s attack stat is just too low to take advantage of that fact. If you want to use Lugia in PvE, you should definitely run Aeroblast as its charge move. Lugia will not have access to a double flying moveset, thus limiting its usage even more. Adding Gust to its movepool would improve things a little bit, but not enough to make it the ultimate flying type attacker in PvE.

Now here is where things get interesting. Lugia’s bulk is absolutely insane, so it definitely has potential to shine in the PvP scene.

Aeroblast’s DPE is top-tier. Before the nerf (180 BP), it was actually the highest DPE charge move in the game, and now it has an excellent DPE but it’s not the #1 move regarding that metric anymore. Unlike other heavy-hitting moves such as Brave Bird, Close Combat or V-Create, it doesn’t have any drawback when using it (aside from the fact that you waste 75 energy if it gets shielded and you don’t get the boost). But the steep energy cost and the fact that Lugia’s best fast move in PvP is Dragon Tail (which is not amazing for energy generation) are serious drawbacks to consider.

Lugia will mainly be used in Master League, as it gets countered by plenty of meta relevant Pokémon in Great League (Sableye, Umbreon, Mandibuzz, Dewgong, Zweilious, Galvantula, Lapras, A-Raichu, A-Marowak and Registeel, among others) and in Ultra League (Giratina-O/A, Gengar, Melmetal, Registeel, Articuno, Lapras…). However, that doesn’t mean that it’s not usable in GL and UL, so I’d try to at least get one with decent IVs for these leagues just in case (watch out, you’ll need a VERY low ATK IV reroll when trading to get one below the 1500CP cap). Lugia has the potential to become a very decent surprise closer when shields are down, so try to get yourself a decent one for these leagues if you can.

Regarding Master League, the preferred moveset is Dragon Tail / Aeroblast and Sky Attack. As of now, PvPoke ranks it #7 in the Master League, after the latest update to the GAME_MASTER file.

Lugia has the highest stat product in the league, which is no joke. Although it might seem counter-intuitive to not run Hydro Pump for coverage, Aeroblast is so powerful that even when it is resisted, it can deal almost as much damage as a neutral Hydro Pump (and boost your attack by 2-stages!). If that happens, your opponent will probably just concede and give you the W. So just use Sky Attack (as a “bait” move) instead.

As always, huge credit to PvPoke for the simulation results:

Pros of using Lugia in ML:

Cons of using Lugia in ML:

For further details on specific matchups, please click on the link above, where you’ll find all the simulations performed by PvPoke’s amazing tool.

Although Shadow Lugia is NOT in the game yet, the fact that Shadow Mewtwo has already been released makes us think that Shadow Lugia (or may I say XD001?) might follow in the not-so-distant future. And we can calculate its stats and see how it would perform. If you’re curious about how Shadow Lugia MIGHT look, here’s a picture of it: 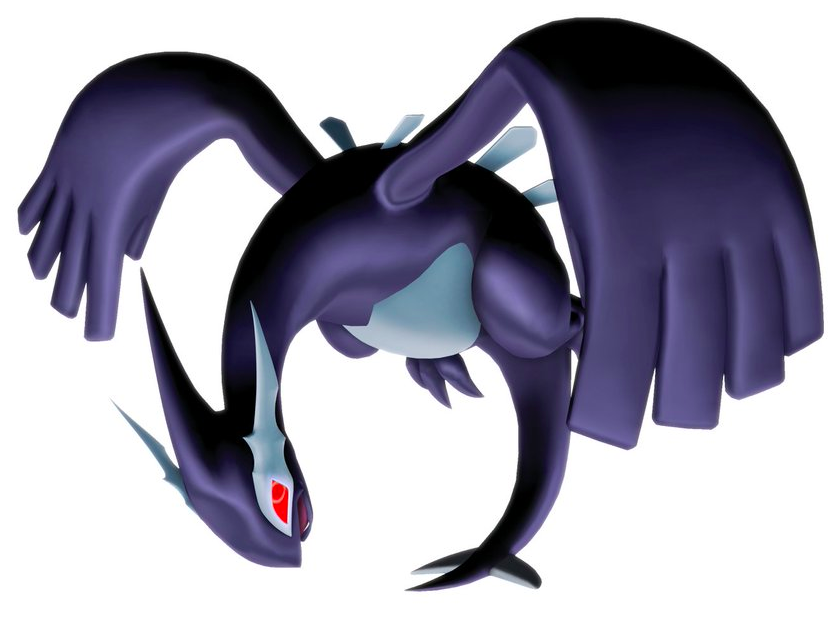 I know, it looks absolutely insane. Now there’s a reason why I wrote “might”. Shadow Lugia (or XD001) had its debut in the Pokémon XD: Gale of Darkness game for Nintendo Gamecube and hasn’t been used in any other game ever since. So it’s quite possible that Niantic might follow a different route and change its design for the regular one with a shadow background. We’ll have to wait and see.

Well, back to where we were. Shadow Pokémon have a 1.2x multiplier to their ATK stat and a 0.833x multiplier to their DEF stat. Some Pokémon don’t really benefit from this bonus as they become too fragile, faint too often and can’t really take advantage of the significant boost in ATK. But that’s definitely NOT Lugia’s case.

Lugia (in its base form) has an insane DEF stat. If we apply the bonus to Lugia’s stats, a decent estimate regarding its base stat distribution would be 231/258/235. Pairing these stats with an excellent charge move such as Aeroblast, and things may get interesting indeed.

Although it still wouldn’t reach Sky Attack Shadow Moltres’ level of DPS, the combination of DPS-TDO of Gust/Aeroblast Lugia would be off the charts. The difference in PvP would not be as significant because Lugia needs that bulk to reach Aeroblast, as it takes a lot of time to charge it up.