Blast Burn, a Fire type signature move that can be learned by the starter Fire type Pokémon in the main series games, has been confirmed as the exclusive move that Charizard will be able to learn in the upcoming Community Day. Surprisingly, Blast Burn does NOT have the same move characteristics as Frenzy Plant. It is a 2-bar charge move with 110 base power and a cooldown of 3.3 seconds.

Fire type might not be the most useful one in the current metagame, but that could change in the near future. It is still unclear whether or not the Regi Trio will follow the Eon Duo in future Legendary Raid battles, but if it is, Regice and Registeel are weak to Fire type attacks, and thus Charizard and/or other fire type attackers could gain some relevance.

The following Table compares the stats of the best fire type attackers in the current metagame, sorted by Pokédex number.

Charizard has been an average attacker until now. Despite being able to learn Fire Spin and Overheat (the former best Fire type moveset), there were better options to use.

Flareon has always been a great budget option. It is a Pokémon with a great attack stat that just requires 25 candies to evolve, which makes it a good resource-efficient alternative. Unless you care about maximum performance for short-manning raids, Flareon is a great alternative to Moltres and Entei and it doesn’t require rare candies to power up.

Moltres is the best Fire type attacker in the game, and (-spoiler alert-) this hasn’t changed even with the introduction of Blast Burn in Charizard’s movepool. However, there are several reasons why you might end up choosing another alternative. First of all, Moltres candy is quite difficult to come across. Furthermore, despite having the greatest attack stat among all fire type attackers, its bulk is average-tier for a legendary Pokémon. And finally, its typing makes it have a double weakness to rock type attacks (but it resists ground type moves that are super effective against the other non-flying fire type Pokémon).

Entei is a bulkier alternative to Moltres. Its attack stat isn’t low, but it is lower than Moltres’ and Flareon’s. Its bulk makes it the TDO (Total Damage Output) king, or in other words, the one that will probably deal most damage before fainting (depending on the matchup, of course).

Finally, Blaziken is an interesting alternative but not as viable as of now. Its dual typing does not help him much and being less bulky than other options makes it fall a bit behind. Furthermore, it is commonly used as a fighting type attacker rather than a fire type one.

There is a common misconception about what metric matters the most when choosing a moveset for a specific Pokémon. The metric we are interested in is weave DPS. It basically takes into account both fast and charge move’s base power, move cooldown times and energy gains/requirements. The following Table showcases the most relevant fire type movesets, sorted by weave DPS (without STAB).

As it can be seen in the Table above, Fire Spin and Blast Burn will indeed the best Fire type moveset in the game as soon as it is released.

* Keep in mind that the method used to compute these values has two small flaws. First of all, it underestimates the final cycle DPS as it does not really consider the energy gain from receiving the defender’s attacks in battle. Furthermore, it overestimates the cycle DPS in cases with full-bar charge moves as it considers that the attacker faints right after firing off its last charge move (which is not common, as there are plenty of situations where you’d faint before firing it off and thus wasting energy). Nevertheless, it’s still a pretty good approach for vacuum calculations, even though simulations are better.

However, it is still unclear whether Charizard is going to be superior to Moltres and Entei now that it will be able to learn it, right? Well, in the next Table, its attack stat will be added to the formula to see how it performs and compares against the other TOP-Tier Fire type attackers with their best respective movesets.

The results state that Moltres will still be best Fire type attacker in the game. The second spot from a DPS perspective seems to be a bit more contested than before, but still belongs to Flareon, due to its great attack stat. Flareon has higher DPS than Charizard, but depending on the matchup (for example, if the raid boss knows a ground type charge move), Charizard could overall have a greater performance. Entei is an interesting case. It is not that far from Charizard and Flareon’s DPS, but its bulk will make it a great alternative and the king of TDO. Another interesting comparison can be done between the two best Charizard movesets, as the introduction of Blast Burn has made it gain more relevance and improved its attacking abilities significantly.

How does Charizard with Blast Burn perform in battle?

Now, the fun begins. All those “vacuum” calculations are interesting but the most important aspect to consider when comparing different Pokémon and movesets is how they compare in real battles. Several battle simulations have been performed in Pokébattler in order to observe how Charizard with Fire Spin and Blast Burn performs in battle and how it compares to its Overheat variant and the other powerful Fire type attackers in the current metagame. In order to do the comparison, three different raid bosses were considered, the first one being a Tier 3 Raid Boss, Jynx, the second one being another Tier 3 Raid Boss, Piloswine, and the third one being a potential future Tier 5 Raid Boss, Registeel. You were probably missing a TDO column in the last comparison too. We have covered that by using Pokebattler’s Battle Simulator, as TDO is mostly matchup-specific. 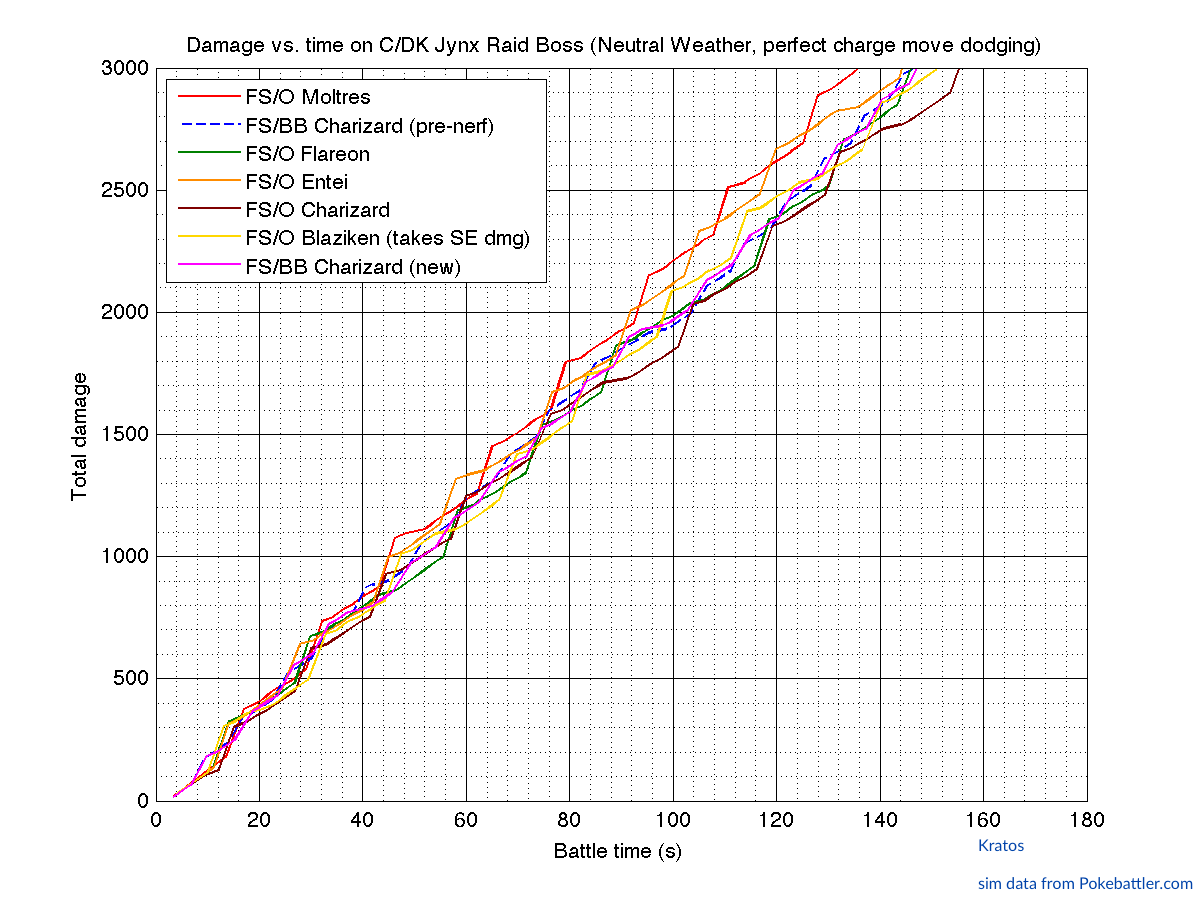 The graph above shows the performance in terms of damage dealt vs. battle time. As it can be seen, Moltres is the best Pokémon for this matchup, just as expected. Then, the second Tier by just looking at this graph would include Entei, Flareon and both the Blast Burn Charizard pre- and post-nerf variants. Blaziken(*), despite taking SE damage from Confusion and neutral damage from Draining Kiss, seems to perform quite well in this matchup too (although we don’t recommend you use it for this specific case).

Finally, with a significantly worse performance, we can find Charizard with its current best moveset prior to the introduction of Blast Burn. Two conclusions regarding Charizard can be made by looking at this graph. The first one is that Blast Burn‘s introduction in Charizard’s movepool has helped it a lot to catch up with the performance of the other meta-relevant fire type attackers in the game. The second conclusion is that the changes made to Blast Burn’s move characteristics have nerfed its viability a little bit, which is such a pity as Charizard could’ve become a much better attacker. Now, let’s look at both TTW and TDO graphs.

The main thing that can be added to the prior analysis is how good Entei’s performance is from a TDO perspective. It has greater bulk than the other relevant fire type attackers and thus, it will be able to last longer in battle and deal more damage. If you want to choose a Pokémon with the intention of short-manning raids, Entei is not the best pick. However, if you want to invest stardust in a more resource-efficient attacker with slightly less DPS but still a great performance overall, Entei is a great choice.

* Yet again, take Blaziken’s results with a grain of salt because of the matchup disadvantage mentioned earlier.

You might be disappointed by how Charizard performed in the simulations earlier. Well, let’s be honest here, it isn’t as good as it could’ve been, especially after Blast Burn’s nerf, but it still can perform very well under certain conditions. The next Raid Boss is Piloswine. You might be wondering “Why Piloswine?”, and the answer is that it learns Bulldoze, a Ground type charge move. As you may know, Fire type Pokémon are weak to Ground type moves. However, Moltres and Charizard are also Flying type Pokémon, which overall makes them resist Ground type moves, unlike the other non-flying fire type attackers. This time around, Moltres and Charizard will take neutral damage from Powder Snow, whereas the other attackers will resist it. Furthermore, they will resist Bulldoze, whereas the other attackers will take super effective damage from it. Let’s see how they all perform under these circumstances. 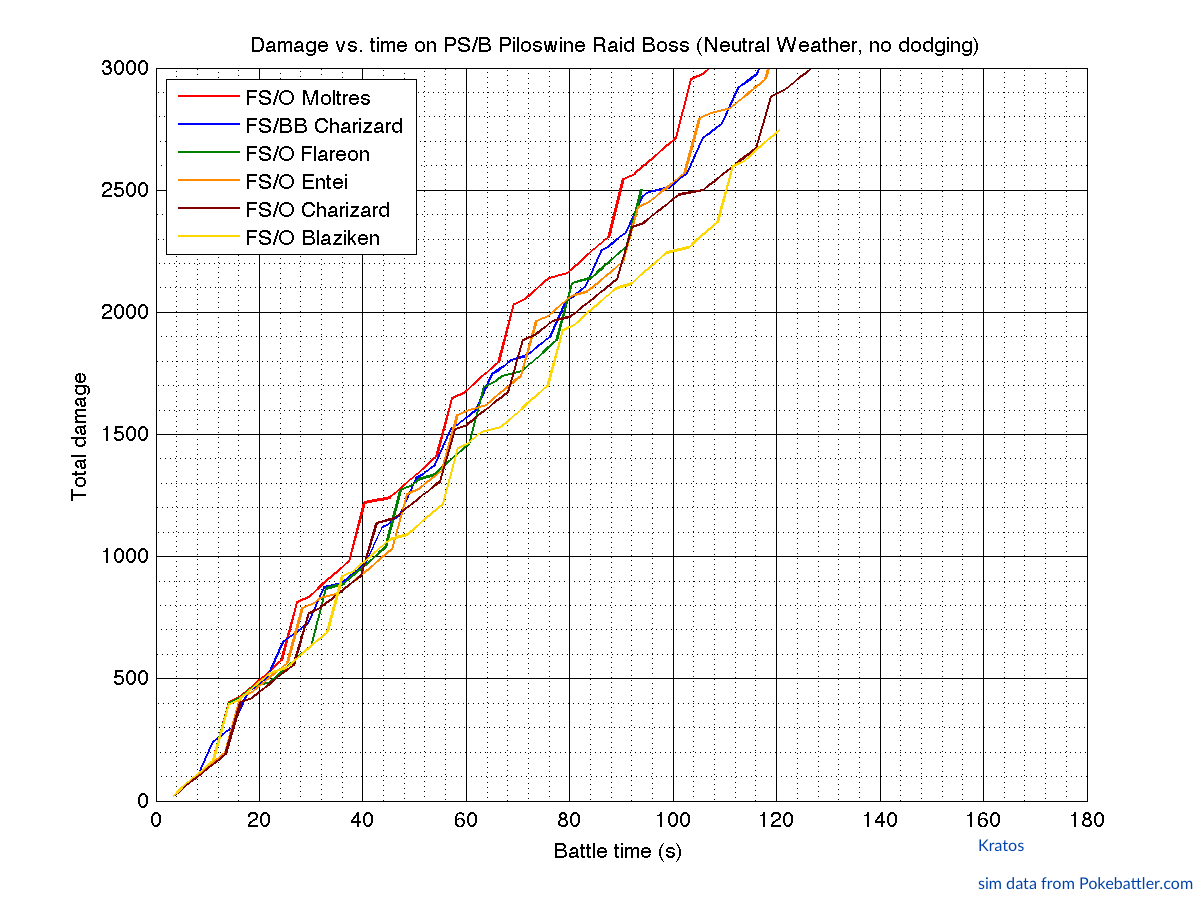 As you can see in the graphs, Flareon and Blaziken don’t even make it to the end of the battle. Blast Burn Charizard, in this case, performs better than the other attackers (but it is still below Moltres‘ performance). Moltres, under this circumstances, seems to be better than anything else, but Charizard could be an alternative in this kind of matchup for those who don’t have the resources to power up multiple Moltres. Don’t let the Time To Win graph trick you, as it doesn’t take into account the relobby time and the lag and time lost associated. For this specific matchup, Charizard and especially Moltres perform better than everything else.

The final scenario tested will be against a potential future Tier 5 Raid Boss, Registeel. This comparison can be considered as neutral because both of Registeel’s moves considered are Steel type, which are resisted equally by every single Fire type attacker compared. Machamp (who will take neutral damage from Registeel’s moves) has been added to the comparison, just to see how it performs and how it rivals the other attackers. 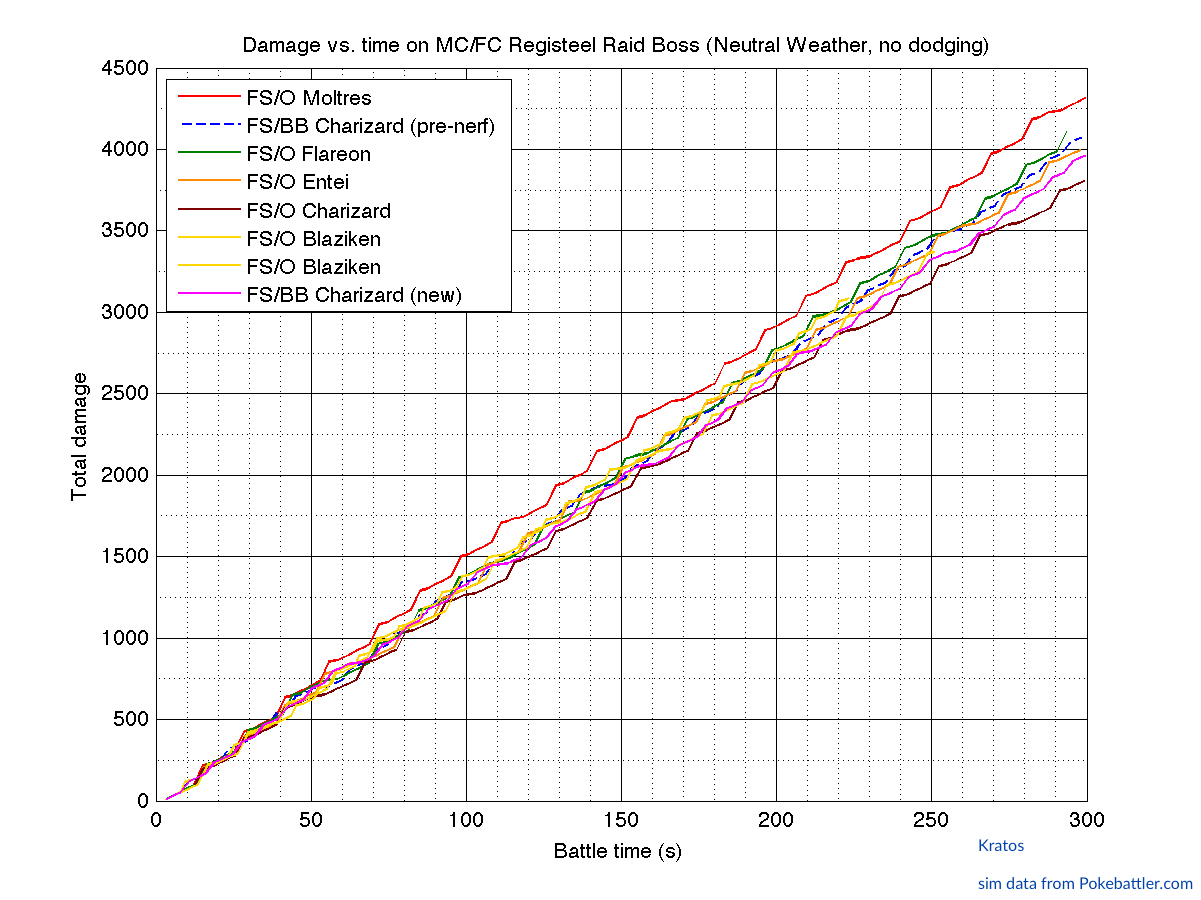 The true power of the best Fire type attacker, Moltres, can be seen in this comparison. Moltres is the only Pokémon that can be considered if you want to trio a double steel Registeel Raid Boss without weather boost. Charizard could’ve been a magnificent Fire type attacker, but Blast Burn’s nerf has made it a little bit less relevant. It’s still going to be a great option, but worse than what it could’ve been. Entei, yet again, shows who the king of TDO is despite not being the best attacker from a time to win perspective. Even though Machamp does not have the best TDO (as it doesn’t resist Steel type moves), it’s still a great option from a TTW perspective vs. Registeel. Finally, the next graph will show each Pokémon’s TTW and TDO. 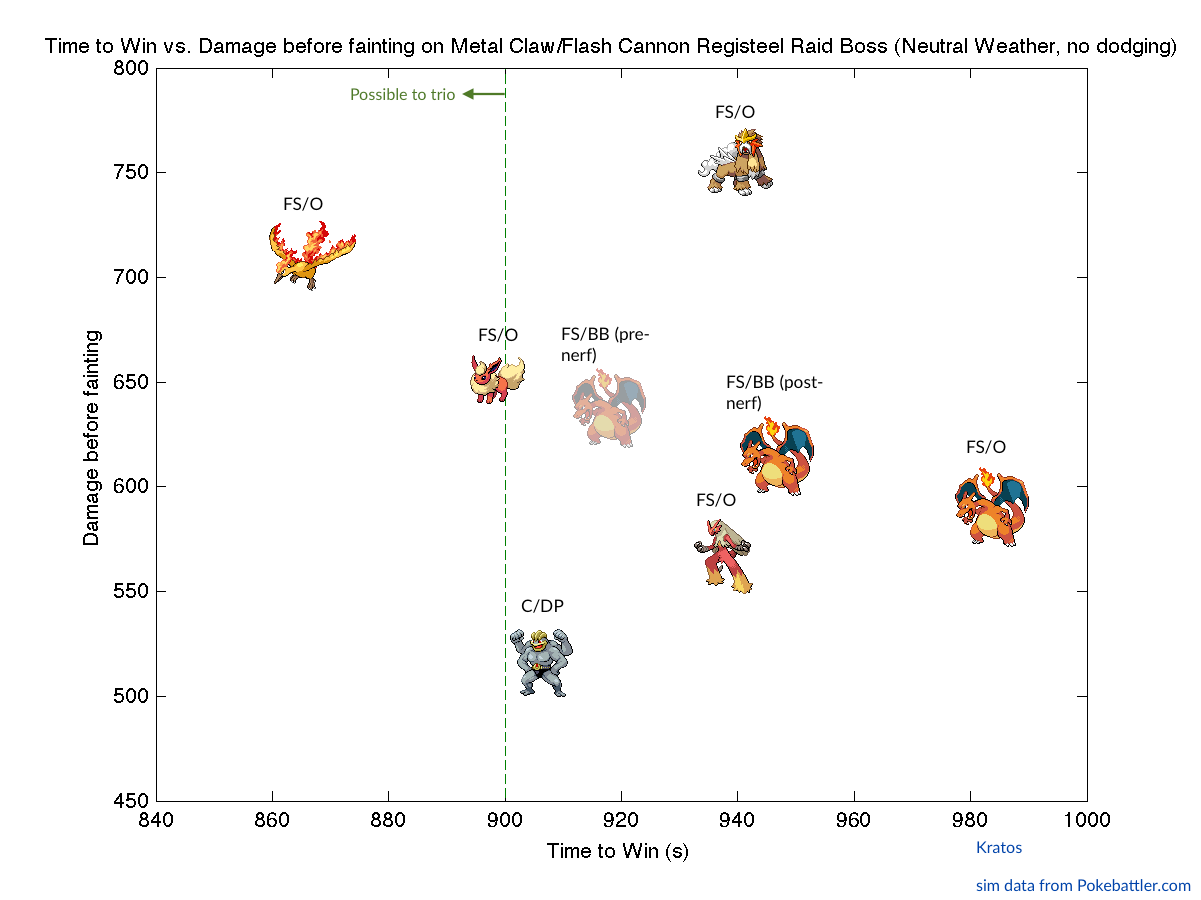