Hello Trainers, the PokéMiners have come through with some more details on a few things in the latest update to Pokémon Go.  Some more details on levelling up past 40, new types of quests, some more HOME updates and more.  You can read our article on the initial APL breakdown here:  0.191.0 APK Breakdown: Level 41+, Generation 6, Pokémon Home Support and more!

Please be aware that everything posted here has been publicly reported by data miners (PokéMiners). Information shared through these channels is not affiliated nor approved by Niantic, and is always subject to change. Do not take it for granted, features change and get scrapped all the time. It is very important that you are aware that these things CAN and WILL CHANGE. Additionally, this article contains my thoughts and opinions in regards to the code that was shared online – all of these should be treated as conjecture, not as hard statements. If you’re OK with that, feel free to read further. Potential spoilers ahead.

The rewards that were datamined a while ago have officially been added to the APK.  As a reminder, here they are: 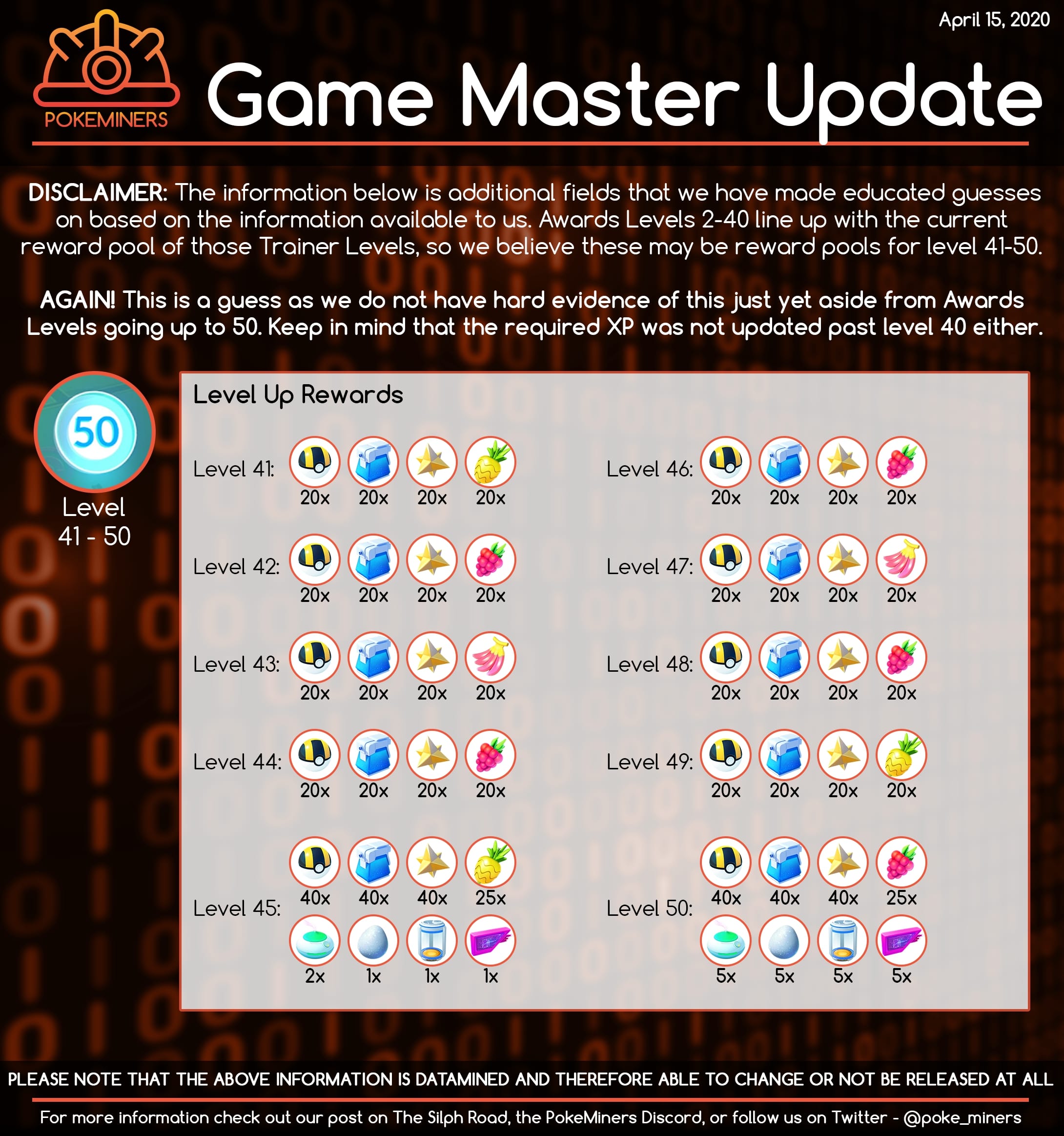 A new stat has been added to your player stats.  This might suggest that your max level will be capped until you complete the quests to unlock the next level.

This was found in the initial teardown, however, it has now been discovered that the quest rewards the level_cap above.

It looks like a new form of quest was added, perhaps a way for us to do Special Research not brought to us by Professor Willow?

A new pre-condition for being able to start a quest has been added, meaning that certain quests will need to be completed before trainers get new quests.

A new quest stat was added similar to the days in a row requirement, it references a LastWindow value.  The PokéMiners aren’t sure exactly what it is, so we’ll have to wait and see.

Two new conditions have been added to GBL cups.

This has a date range, so you’ll have to use Pokémon caught between certain dates

A few communities have run PvP tournaments like this, give trainers an hour or a few hours to catch the Pokémon they can use in the tournament.  It’ll be interesting to see how much advance notice we get for these, and how much time we’ll get to catch Pokémon before the cup starts.

This is exactly what it seems.  All Pokémon used will have to be between two levels.

This will be interesting as well, it’ll really throw a wrinkle in the meta.  Especially if the level gap is small, say 20 to 25.

Apparently, XL Candy has been in the code for a while.  However, it’s received a bunch of updates that make it usable.

A new item has been added called Pokémon Home.  This is likely the transporter that was found earlier.  It has an on/off function so it will work similarly to the Camera.

Two new obfuscated fields have been added to each Pokemon’s stats/data, a toggle and a number.  Perhaps a toggle to determine if the Pokémon is able to be transferred and something else?

The Game Master received some updates as well.  Home energy costs, Home Settings, and Home Form Reversions.  Speculation is that the Home Form Reversions refers to Pokémon that require items to change items.  They’ll revert back to their original forms when sent to Home.

It also appears, contrary to my speculation, shiny Pokémon will not cost more to transfer to Home.

The tags appear to contain an ID, a Name, a Colour and another obfuscated value.  You’ll be able to create, edit, delete, assign the tags.  To me, this feels a lot like the labels you can put on Pokémon in Home.

Niantic announced that the Pokécoin quest system that was being tested in Australia, Germany, New Zealand, and Taiwan was being discontinued.  As such, it’s been removed from the Today screen.  The system is still there, though.  So it would appear they haven’t completely given up on it.

The new game music that was found in the initial teardown has been added to the Game Master file.

Niantic social received updates to control the minimum level for being able to access it, along with updates to show your online status, friends list, and max friends per page setting.  This suggests that a friends list might be coming to Niantic Social.

That’s all for now trainers, stay safe out there.