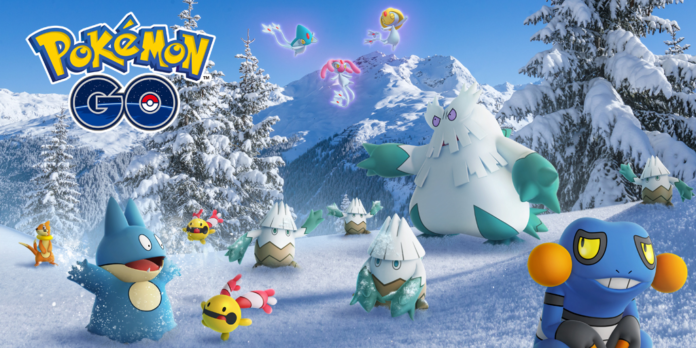 1 p.m. PST is a special time for Pokémon Go, always being the time new stuff comes out. With the holiday event kicking off, we are getting details slowly but surely on all the new stuff happening! So enough of a intro, lets get to the meat of the event!

Fair warning, this is an in progress article, as hatches and raid bosses are still developing.

Edit: All raid bosses and new Pokémon should be current, except a recent addition of Chingling being available in the 7km egg pool, alongside Munchlax, Mantyke, and Riolu.

It was a tossup on whether or not shiny Delibird would be coming for the holidays, as it was not originally reported with the in-game news or Niantic’s post on the matter, but instead through the main pokemon.com site. This is the main pokemon site however, so it is to be trusted, especially since lo and behold Shiny Delibird came to the scene with the start of the event!

Picture credits come from the local discord of a Go Hub Moderator: Community

So get out there trainers, may i wish you luck in your endeavors to find the shiny Santa bird! Especially since, unlike last time around the Holidays, Shiny Santa Hat Pikachu has hit the scene!

Credits go to a user on the Go Hub Discord

Finally, in case that was not enough, as shown by u/MelloNation97 on Reddit, there exists a shiny Azurill, widening the large pool of shiny baby Pokémon (and letting those get access to that cool looking gold Azumarill)!

Niantic has finally given another wave of Sinnoh mons, moreso than originally thought. We were shown Snover, Abomasnow, Croagunk, and Munchlax, but the list got way bigger, take a look:

All the evolved forms should be able to spawn in the wild, as none of these ones are a 3-stage evolution. We have already seen wild Abomasnow and Drapion, and it is safe to say the others will follow suit.

Unfortunately, for those checking their Piloswine you will not find that it can evolve into Mamoswine just yet, alongside there being no apparent way to get a Glaceon yet. Longer still must we wait for the mammoth to come and rule over the Ice type meta game.

Additionally, it was confirmed prior, but we got the likes of Munchlax hatching from 7km eggs as originally promised, and can assume the likes of Mantyke, Chingling, and Riolu to follow suit as some other language in-game news reported.

As such, all the announced bonuses are active, so double candy works for all facets of the game, be it professor transfers, catches, or even transfers to Let’s Go Pikachu and Eevee if you happen to have those games on your Switch. This lasts until the 22nd, where it will switch to double Stardust, so get to transfering and catching to rack up those candies. You will need them for unlocking those second charge moves.

With the arrival of Heatran, there was a raid boss shakeup to boot, bringing in several new Pokemon into the rotation. Here is the list we have seen so far: