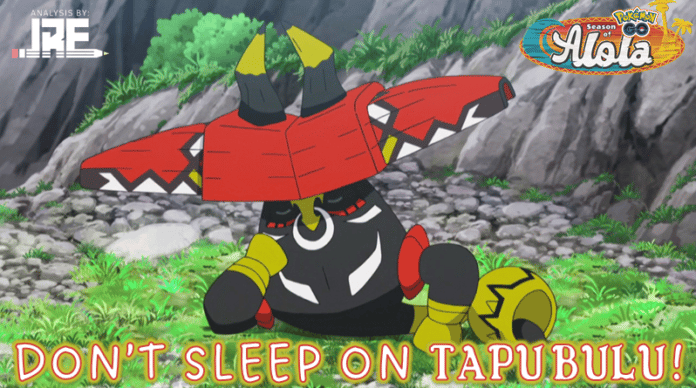 Hello again, fellow PvPers! Yet ANOTHER new event arrives this week, the Spring Into Spring Event. While not as fun-filled for us PvPers as some other events during this “Season Of Alola”, we DO have a couple new toys to play with, including what looks like our best Alolan Legendary yet, and a new twist to the very first Alolan Pokémon we ever got in GO.

Before we get into the deeper dive, let’s sum up with our Bottom Line Up Front:

To answer that and more, let’s dive in!

As mentioned in the summary, the Legendary Tapus have been pretty lackluster thus far. Koko is just a mess, and Lele is “viable” but unexciting in Master League. Thankfully, things may be looking up with the arrival of TAPU BULU.

The first good sign is that it’s tankier than Koko or Lele. They all have the same HP (157 at Level 50), but Bulu has nearly 30 more Defense than Koko, and a half dozen more Defense than Lele. That DOES also mean it has the lowest Attack of the three, but not drastically so… only about 8 less than Lele, and just 1 less than Koko.

The other thing working in its favor is being a very rare Grass type that actually gets well into Master League range, with a max CP of 3419 at Level 40 (already pretty good) and 3865 at Level 50. Both of those trail Zarude, but leave Celebi behind. In fact, aside from a couple of Megas, Tapu Bulu has the highest CP of any Grass type except Zarude, the who-knows-when-it-will-be-released Shaymin Sky Forme, and the future Kartana (also from Alola).

Most people expect Shaymin to be quite good, but Kartana, despite a tasty Grass / Steel typing, may have some issues, as it has very Attack-heavy stats (not great for PvP) and lacks any Pokémon GO Grass fast moves, looking like its best options from MLG are Bug-type Fury Cutter and Psychic-type Psycho Cut… but it could also be stuck with something like the lackluster Air Slash. Blech.

In the here and now, Bulu DOES get a Grass fast move, and a pretty good one for PvP in Bullet Seed (1.67 Damage Per Turn, 4.33 Energy Per Turn). And while it doesn’t get things Kartana and/or Shaymin can like Leaf Blade, Leaf Storm, or Seed Bomb, it does have Grass Knot, which is very serviceable, being between the large group of 55 energy for 90 damage moves (Thunderbolt/Ice Beam/Flamethrower/Earth Power/Last Resort/Psychic/Energy Ball) and the godlike Psystrike and Avalanche that deal 90 damage for only 45 energy.

In short, Grass Knot is an above average move that many other Grass types would be quite happy to get their paws on.

Beyond that, Bulu also has Solar Beam for raw closing power, STAB Dazzling Gleam, which is a bit expensive (110 damage, but 70 energy… 10 more than Moonblast for the same damage) but workable thanks to the high energy gains of Bullet Seed, and the mighty Megahorn (55 energy for 110 damage… on paper even better than Moonblast!) and the anti-Grass/Psychic/Dark coverage it provides.

Now let’s put it all together with some numbers!

Speaking of Zarude, let’s do a quick side-by-side comparison between the wins and losses of Bulu, Zarude, and Celebi in a quick table, just to see what advantages (and disadvantages) Bulu has and how it stacks up. I’ll put in bold and wins where one of the three is the ONLY one to win that particular matchup.

Both Tapu Bulu and Zarude have four unique-to-them wins. Bulu beats Dragonite and Yveltal thanks to Dazzling Gleam’s super effectiveness, Zekrom thanks to its Fairy side resisting Dragon Breath and Crunch and its Grass side also resisting the normally-terrifying Wild Charge, and Mamoswine thanks to Bullet Seed letting it just outrace Mamo. Zarude beats both Giratinas and Snorlax thanks to resisting their Ghost damage, and overpowers Melmetal and Magnezone with its unresisted Dark Pulse (whereas all of Bulu and Celebi’s moves are resisted by Steels). However, Bulu (along with Celebi) goes on to beat several other things Zarude cannot, to include obviously Fighters (Bulu and Celebi resist Fighting, while Zarude is critically weak to it), Palkia, and certain variants of Garchomp (remember that Bulu resists Ground AND Dragon 💪). Zarude has its niche, and it’s a GOOD niche, but Tapu Bulu becomes the best overall Grass type in Master League. It has its failings compared to Zarude and even Celebi, but it has the most complete overall body of work… and one that remains pretty consistent across other even shield scenarios (losing only things like Walrein and Mamoswine in 2v2 shielding, for example… and re-gaining Zarude).

I’ll say it one last time: Tapu Bulu arrives as arguably THE best Grass type in Master League, in both Classic and Open formats. It has its failings (Giratinas and Steels, mostly), but puts in the most comprehensive body of work of any Grass type currently in the game.

Alolan Exeggutor: STICKING YOUR NECK OUT

I can keep this one brief. Because while I love ALOLAN EXEGGUTOR‘s flavor and design, and have genuinely good news to lead this section off with — that its new move DOES make it better pretty much across the board — the overall tale is still a sad one.

Draco Meteor makes Alolan Eggs Benedict a more intimidating Pokémon, though that’s not hard when your only alternatives are the powerful-but-impractically-expensive Solar Beam and the uninspiring Dragon Pulse, which deals only 90 damage for 60 energy (much worse than all the other 90-damage charge moves I noted when talking about Bulu’s Grass Knot earlier).

Draco  Meteor deals the same damage as Solar Beam (150!) for only 5 more energy than Pulse (65!) for a crazypants 2.31 Damage Per Energy, trailing only V-Create’s 2.38 DPE and Brave Bird/Overheat/Leaf Storm’s 2.36 DPE. So what’s the catch? Well, just like all those moves, Draco comes with a stiff drawback: it lowers the user’s Attack by two full stages each time it is used. So yes, you’ll obliterate most things in your path with Draco, but then everything you hit after that, you’re hitting through pillows.

The raw potential of Draco Meteor does buy Alolan Eggy some extra wins, but not as many as you might hope. In Great League the record remains poor, picking up new wins over Hypno and Cofagrigus but still holding less than a 25% win rate versus the core meta. Similarly, in Ultra League, there is NO notable difference between Draco Meteor and Dragon Pulse (the one difference that shows is that Draco loses to G-Fisk and Pulse beats it, but that win actually only requires Seed Bomb, so it still counts).

Even with Shadow A-Exeggutor, the difference is minimal — with Draco picking up only Umbreon and Ferrothorn as compared to Pulse — and the record is still barely 25% winrate. And as for Master League? Well… let’s just say there’s a reason I didn’t mention it in my comparison of Bulu versus other Grass types… even with Draco Meteor (which adds only Landorus and Snorlax to the win total as compared to Dragon Pulse), to be blunt, it still stinks. 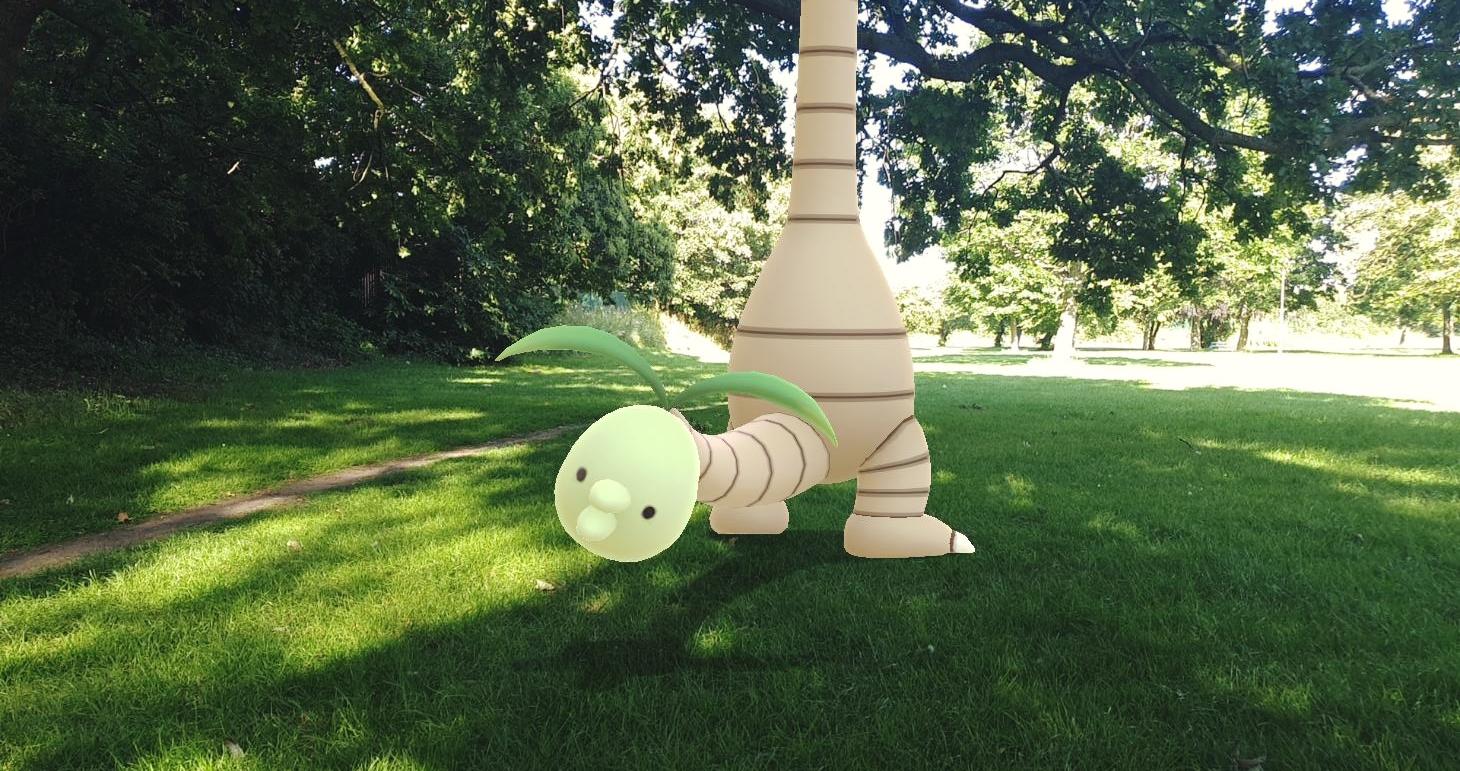 I am sorry to report that while Bulu is a positive addition to the game, and Draco Meteor Alolan Exeggutor technically is too, only one is going to make any kind of ripple across the PvP pond. And it’s the one lacking a comically long neck. Yes, get Draco Meteor while you are briefly able, but I wouldn’t waste resources building any of them up yet or anything.

A BRIEF WORD ON PvE….

And as a bonus for my PvE friends, Tapu Bulu enters the game as a Top 10 Grass Attacker, falling behind Venusaur (Mega and Shadow), Zarude, Shadow Tangrowth, Shadow Torterra, and JUST behind Shadow Exeggutor in terms of overall PvE prowess, though it’s a little more middling in terms of pure Damage Per Second. It’s a viable option if you like a varied team… and especially if you plan to build one up for PvP Master League anyway!

As for Alolan Exeggutor, if you want it for PvE, yes, you want Draco Meteor… and you also ideally want Shadow. In that form, it becomes the #5 Dragon in DPS (among things currently in the game… future Megas and other Dragons like Kyurem are likely to change that down the line). That said, as has already been pointed out by folks smarter than me, its overall numbers when you factor in Total Damage Output (how long it can hang in there in battle, basically) are quite a bit lower, outside the Top 20. Plus Megas and other Dragons WILL be on the way at some point, so… I wouldn’t get overly excited unless you just really like variety.

Alright, Tapu Bulu is just about to arrive in the Pacific as I write this (about two and a half hours from the time I’m writing this right now!), so we’ll end it here. There are some pretty decent spawns associated with this event, so scoop those up, but the Legendary is the legit best prize this week. Good luck with your hundo search!

Until next time, you can find me on Twitter for regular PvP analysis nuggets, or Patreon. And as always, please feel free to comment here with your own thoughts or questions and I’ll try to get back to you!

Whether you grind hard or kick your feet up during the Spring Into Spring Event, please be safe out there, Pokéfriends. Thanks again for reading, and catch you next time!