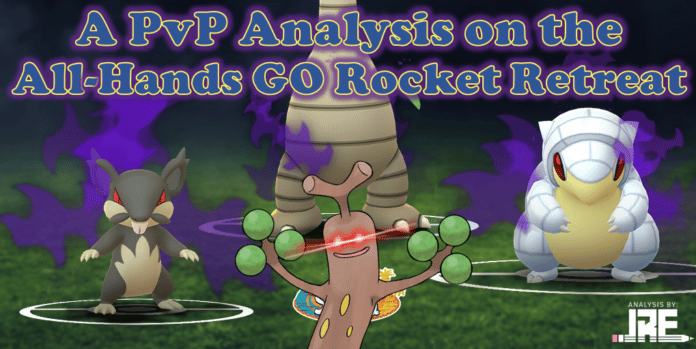 Hello again, fellow PvPers! I’ll cut right to the chase: today we take a quick look at the latest newly arriving Shadow Pokémon and what their impact may be on PvP. And after that I have a bunch of new Pokémon to analyze as well (starting with Salazzle first!), AND an updated analysis on Halloween Cup (comes back April 5th!) so let’s not waste any more time and just get right to it, shall we?

I actually wrote up a whole article last night on what was SUPPOSED to be the new crop of Shadows, with Luxray as the highlight. (It was actually published here on GO Hub overnight.) But then SURPRISE! No Luxray, and a trio of ‘mons that hadn’t been mentioned AT ALL of late, and only like an hour before the event started, so uh… thanks, Niantic! Really appreciate that. Anyway, no whining… I’m just here to analyze.

So, I’m gonna start with the new-since-last-night stuff, and then close it out with what I can salvage from that now O.B.E. article. Here we go!

A DAY LATE AND AN ELITE TM SHORT

Hey, it’s ALOLAN SANDSLASH, as a Shadow! That’s cool, right? I mean, A-Slash is one we just talked about recently… for some reason… what was it? 🤔 Oh right, we just had its Community Day a mere three weeks ago. And so naturally, NOW is when we get the Shadow version. Nice. So we either have to use Elite TMs to get the exclusive move we just had less than a month ago, or wait until December (as a reminder, we JUST entered April) to presumably be able to get Shadow Claw then during the Community Day rehash. I try to be positive, but between having a couple hours of work wasted last night and now this, I’m a bit salty. You couldn’t have released Shadow A-Slash during the LAST GO Rocket event, Niantic? Come on, people. Sheesh.

Okay, rant over. But the reason I’m ranting in the first place is because Shadow A-Slash with Shadow Claw is basically a straight upgrade over non-Shadow in Great League, with non-Shadow holding on to take out Lapras, but Shadow managing to outrace Dewgong, Pidgeot (one of the notable losses for Shadow Claw that Powder Snow beats, as noted when I wrote about it before Community Day), Pelipper, Galvantula, and even big bad Bastiodon! I think Lapras is overall a small price to pay for THOSE pickups, don’t you?

The fun continues in 2v2 shielding as well, where Shadow A-Slash picks up Lapras, Galvantula, Mandibuzz, Sableye, Registeel, and BOTH Stunfisks as compared to non-Shadow, which has Mew as its only unique, standout win. And while things are closer between Shadow and non-Shadow with shields down, I think it’s pretty clear that Shadow A-Slash is probably the better way to go overall.

And that’s true in Ultra League as well. The gap is smaller, but Shadow is again an overall upgrade as compared to non-Shadow. Well, okay, maybe more of a sidegrade, but a good one, now able to beat Jellicent, Lapras, Empoleon, and Armored Mewtwo, while non-Shadow better outlasts Shadow Nidoqueen, Galvantula, and Meganium (with its dang super effective Earthquake). And yep, in 2v2 shielding too: Shadow A-Slash gains Lapras, Alolan Muk, Dragon Breath Charizard, and now Shadow Nidoqueen, while non-Shadow beats only regular Nidoqueen and Scizor instead. Non-Shadow is again slightly better in 0v0 shielding, but Shadow clearly stakes a claim on relevancy in Ultra as well.

So, yes, this is THE one you really want out of this crop of new Shadows. And while I encourage Elite TMing for Shadow Claw if you can (I’ll spare you the numbers, but while the improvement with Shadow Claw is clear, Powder Snow is no better or even a downgrade in general), not everybody has that luxury, and again, to have this happen this shortly after a Community Day many weren’t very excited about anyway… reversing the order of those would have helped EVERYBODY. Why they waited until now is baffling.

One last note before moving on: this also means Shadow ALOLAN SANDSHREW, who is a spicy XL pick in PvP. However, it would appear it doesn’t appreciate the slash to its Defense that comes with being a Shadow, as non-Shadow Shrew is slightly better overall than non-Shadow A-Shrew. Non-Shadow manages to beat Swampert, Whiscash, Sableye, Charm Alolan Ninetales, Galvantula, and Mew, while Shadow only has unique wins versus Dewgong, Drifblim, and Shadow Nidoqueen. It’s a also a small step back in Little League (Shadow vs non-Shadow). I mean, if I were to land a hundo Shadow A-Shrew, sure, I’d hold onto it, unevolved, as a maybe future project. But I wouldn’t recommend actually building it right now. Doesn’t seem worth it for that kind of crazy investment. (For the record, though: a 0-10-14 at Level 15.5 is #1 IVs for Little League, so… yeah, hold onto those too. Why not, right?)

As for the other new Shadow Alolans, there’s far less to say:

TOO DEEP IN THE SHADOWS?

Okay, now we get back to stuff I already wrote before the last-minute Niantic April Fool’s switcheroo. As I mentioned, LUXRAY was going to be the highlight, but ironically, it’s the only one from the mined new group that was NOT released. So we’re left with the riffraff:

So there we go. Sorry if this was a bit of a downer, but I’m just here to report the numbers. Not every event can be a big winner! The All-Hands Rocket Retreat runs until Thursday, April 7th, so get out and get while you can while we can get it. And remember to TM away Frustration from Shadows old and new by the 7th as well. May your GO Rocket balloons be plentiful!

Until next time–very likely a review of those new teased Alolan Pokémon, starting with Salazzle–you can find me on Twitter for regular PvP analysis nuggets, or Patreon. And please, feel free to comment here with your own thoughts or questions and I’ll try to get back to you!

Hopefully you can find what you want, but as you search, please be safe out there, Pokéfriends. Thanks again for reading, and catch you next time!