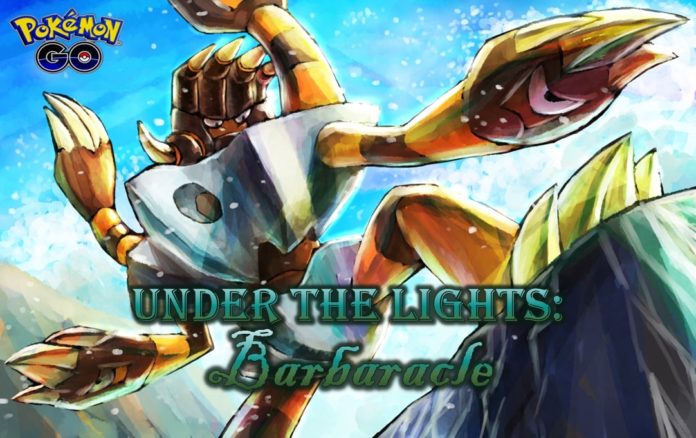 Hello again, Pokéfriends! Got at least one big article in the hopper (the still-a-ways-off Retro Cup meta analysis), but today it’s just a quick look at this week’s newest Pokémon GO arrival: Barbaracle.

At first glance, Barbaracle is just a mess of a Pokémon.

Rock / Water is not a great typing, being weak to some of the most popular and populous typings in PvP (Fighting, Ground, Electric, and 2x weak to Grass, just like the Mud Boys), and having a hodgepodge of moves that include just one STAB fast move (Water Gun) and one STAB charge move (Stone Edge, so not even two STAB moves of the same typing!).

But somehow, someway, it looks like it can make it all work, and using just one of those STAB moves at all:

And that’s in addition to things you would expect a Rock type to beat – Lapras, Dewgong, Froslass, Abomasnow, Skarmory, Pelipper, Mantine – and/or a Water type to beat (including Alolan Marowak, Talonflame, and Bastiodon).

And it’s rather consistent too, with #1 IVs not really changing anything… run-of-the-mill IVs seem to be perfectly fine. It’s a weirdly eclectic mix of moves that somehow just… works.

Now yes yes, some of that is bait dependant; Barbaracle is probably not what anyone would consider a safe, consistent pick. And there are plenty of things (Fairies, Grounds, Grasses, even most Steels) that Barbar can’t overcome.

But it’s surprisingly scrappy overall and has the potential, at least, to be a spicy pick that will shock and awe opponents.

Barbaracle in the Ultra League

And there’s a bit more to the Barbaracle story in Ultra League.

Now with default IVs, things don’t look so hot. But mix in a good IV Barbar and the wins it can bring in versus things you would expect to lose to – like Scizor and Obstagoon, the latter having super effective fast moves, and big Charmers like Clefable and Granbull – and I bet you have at least one eyebrow raised right now.

Barbaracle is basically a much better Clawitzer, beating the same Fires and Ices and Flyers, but more consistently and now with things like the Charmers and A-Muk and Gengar in the mix too. Other than Fighters and Grounds that prey on Barbar’s typing, there really isn’t a whole lot that Barbaracle does NOT put up a good fight against, including with shields down.

So in summary, Barbaracle isn’t going to bust any metas wide open, but it DOES have some good things going for it in Great League and Ultra League, and is just a move tweak or two away from potentially REALLY great things.

It is worth hunting for a good (low Attack, high bulk) version for Great League (especially for potential limited metas down the line) and holding whatever high IVs ones you may find for possible Ultra League spice too. Good luck!

Alright, short and sweet today… gonna end it right there and let you get back out there and catch ’em all!

Until next time, you can find me on Twitter for near-daily PvP analysis nuggets, or Patreon if you’re into that sort of thing. And please, feel free to comment here with your own thoughts or questions and I’ll try to get back to you!

Stay safe out there, Pokéfriends. Thanks again for reading, and good hunting!