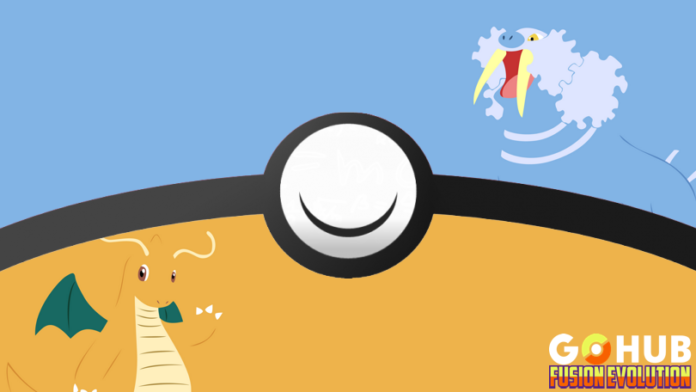 Welcome Trainers, to the third article in the fan-art that is the Pokemon GO Fusiondex, in conjunction with the talented team over at Fusion Evolution.

In my foundation article Collaboration of Concepts : Fusion Evolution in Pokémon GO, I cover the mechanics of how a fusion is calculated. I will refer to these mechanics in this article but I wont be going into granular detail. Previous entries in the Fusiondex can be found here.

For a history of how fusion in the Pokémon Universe was born, please refer to my foundation article; or the first entry in the Fusiondex, Venustoise.

This months entry to the Fusiondex is recommended by Aquatic, member of the Fusion Evolution Team.

In the Fusion Evolution meta, Wagonite is used as a bulky mon under hail, due to it’s signature ability, which makes it take less damage if Hail is active. Even outside of hail, it has good stats all around and a good movepool. In Pokemon Go, I think it would have the potential to be good, despite Water being very crowded. Mainly due to decent HP, Bulk and Attack, being a jack-of-all-trades kind of mon

Pokémon GO Wagonite is a dual typed Water and Flying type Pokémon. It is a blend of the Generation 1 Pokémon, Dragonite and Generation 3 Pokémon, Walrein. This type combination is represented 7 times already in the main series, from the mighty Gyarados to the ever disappointing Pelipper. It comes with many strengths and weaknesses which this fusion does a good job at patching

Within the Fusion Evolution database, Wagonite would evolve from a the Fusion called Leonair, a merger of the Dragon Pokémon Dragonair and Sealeo, the Ball Roll Pokémon. This would be an Egg Group Fusion as they are both part of Group Water 1 (see foundation article for details). The first tier of this chain is currently an unnamed fusion of Dritini and Spheal

In Pokemon GO, I would suggest it would be obtained by evolving a Dragonair with 100 Spheal candy (or vice versa).

Below, we will look at Wagonite’s stats compared to some of the other prominent Water and Flying types in the game, across all released generations in the main series.

The amount of Pokémon that bridge these two types is significant, in total 240 across the 7 released generations, at time of writing. This including legends, mega evolutions and alternative forms. Our entry comes in at #15, which is not too shabby given both Water and Flying have some solid Pokémon in their typesets.

For the sake of the table I have not included Mega Evolution’s.

Wagonite’s stats are solid, sporting an above par defense and stamina to absorb those thunderbolts, and an attack stat which while not immense, would be remembered. If Lugia and Gyarados had a baby with these stats they would certainly pay to put it through college (although it might look different, Lugyaradia?)

Defensively, Wagonite has resistance to Bug, Fighting, Fire, Steel and Water type moves and double resistant to Ground types, but a weakness to Rock and double weakness to Electric type moves.

Conceptually, following the rules of the Fusion Evolution mechanic, this Pokémon has access to all the moves of its composite parts. The spread of moves to combat common counters of this fusions typing is significant.

Below is a list of all the moves Dragonite and Walrein have access to:
I have not included any Exclusive Moves from Community Days or other sources.

If/when abilities are introduced into Pokémon Go, Wagonite would have access to a Fusion Ability, which would be a combination of the abilities available to its constitutional parts.

The ability which is allocated within the Fusion Evolution Database is called Ice Scale, which is a fusion of Ice Body and Multiscale.

Ice Scale is a ability which would only be effective if weather abilities and status effects were introduced into Pokémon GO.

A Pokemon that is waiting for this revelation is the mighty Tyranitar, who’s signature ability Sand Stream causes weather to immediately change to a Sandstorm. For those unaware a Sandstorm damages all Pokémon ⅛ of their maximum HP at the end of each turn, unless they are Steel Rock or Ground. The Hail weather effect is similar to this.

With weaknesses to two different moves types, Wagonite has to take into account of the weather. In weather that has pros, use Wagonite all you want and let it tear through its enemies, but in the weather with cons, avoid using it against foes that may have super-effective moves. FYI: Rain is BAD.

The chart below will help you visualize what weather is beneficial or harmful for Wagonite.

The ever changing jigsaw that is Fusion is a picture without end. There are so many possibilities that it will remain as is, a fun concept. We have to be realistic that everything conceptualists do is considered as Fan-art. While its an acceptable and often fun medium it will unfortunately never make it into Pokémon GO.

I hope you enjoyed this concept, and I hope to share more in the future, along with our friends over at Fusion Evolution. While my usual concepts focus on adding or building on the existing in-game mechanics or the Overworld, this is about adding an entirely new dimension and game play outside of Niantics control.

A huge thank you to Aquatic and the team at Fusion Evolution for helping me with this conceptual entry into the Pokémon GO Fusion database.

Next month we will bring you an entry nominated by our own team at the Hub.