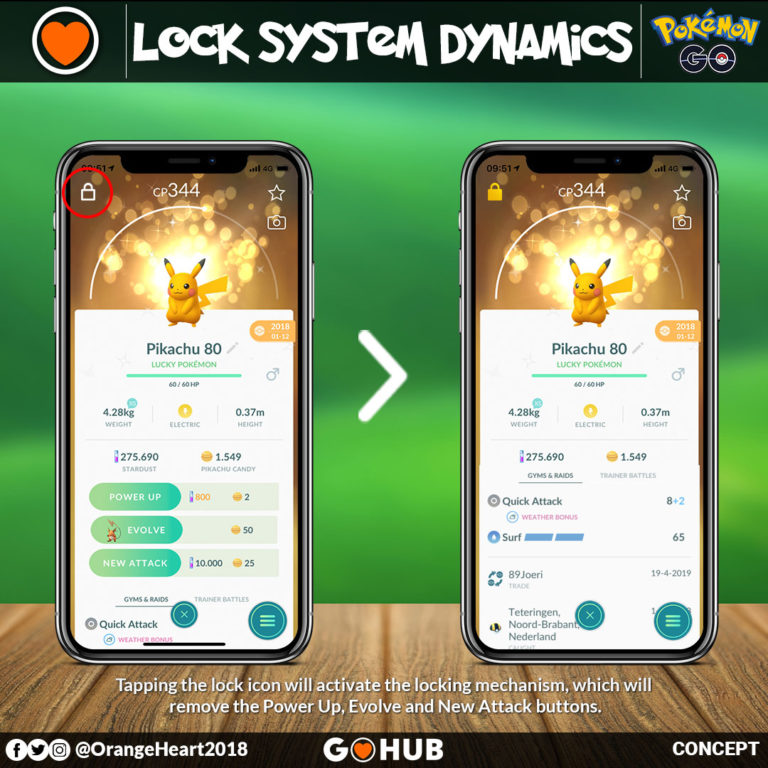 How many times have you hit the “Evolve,” “Power Up” or “New Attack” box (let’s call them “Sin Boxes” for fun) by mistake, followed by a rushed decision of hitting “Yes” because you thought you were on the right Pokemon?

By following through this series of unfortunate events, you can hurt your Pokemon storage quite a lot, whether it’s a Pokémon that you wanted to keep in its current stage of evolution (like a Shiny Wynaut) or maybe it’s one of those that you mistakenly power up and is no longer usable in Great/Ultra League PvP.

Even worse, wasting any amount of Stardust and Candy on a Pokémon that you were planning to send to Professor Willow is a terrible idea. You could have bought yourself a brand new charge move for that Dust!

For all of these problems, there’s a simple and elegant solution: what if we could lock our Pokemon and prevent any power-ups, move changes and evolutions before they are unlocked?

When you have a Pokémon with the Favorite status, as you may already be aware of, prevents you from transferring it to the Professor (individually or in hoards) and from trading it to a friend. The lock system would prevent you from being able to use any of the Sin Boxes until you deactivate it.

At the top right side of every Pokémon screen, you have the Favorite icon. The Lock icon would be on the top left side, as shown in these mocked-up ideas created by OrangeHeart with my direction.

After you turn it on you won’t be able to do the following actions on that Pokemon:

It may not seem relevant at first, but when you hoard an army of particular Pokémon, and you aren’t a big fan of a naming each and every one of them, you can easily make a mistake and power up your Pokemon above 1500 / 2500 CP.

In a nutshell, the “lock” would prevent you from making any mistakes. This means that your Legacy Pokémon, your 1499 PvP champs and your Community Day exclusive moves would be safer than ever. And you get all of that by just having a single button on the UI.

What is the point if you aren’t able to set it as a default option?

A significant amount of mistakes occur when you’re checking the IV’s from your recently caught Pokémon. We all got fat fingers and clicking something accidentally has happened more times than we want to admit.

For that reason, we propose that a new setting is added to the game to accompany the locking feature: Automatic Lock.

With the Automatic Lock turned on (activated in Settings), all the Pokémon that you catch would be Locked. That means that you wouldn’t be able to press on any of the buttons or TMs until you unlock them.

If you’re planning a mass evolve at the end of the day, this feature isn’t really useful, but if you’re playing for Stardust or to find the best IV possible during specific events (like the release of a new shiny with boosted spawns or even a Community Day spawn), this feature can help out.

A note of appreciation to Orange Heart for bringing my conceptual idea to life with the amazing infographics and the cover photo.