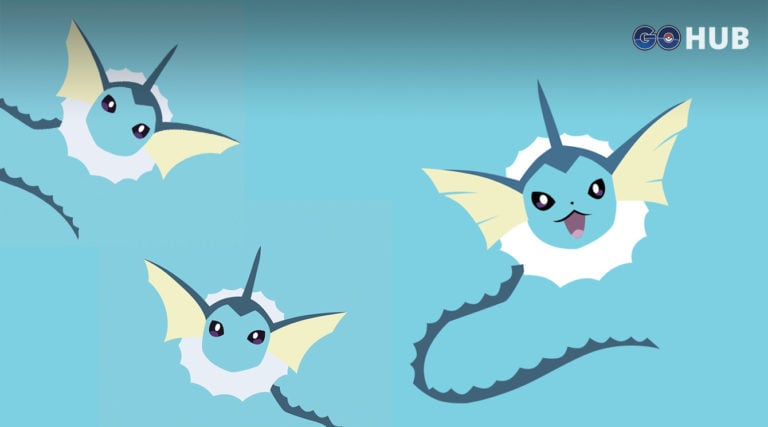 today we’re discussing not if Vaporeon should be nerfed, but why Vaporeon needs to be nerfed in order to allow the current meta of the game to evolve. As reddit and numerous other places have pointed out, the current state of the gym meta game can be summed up into one picture:

Almost every gym has at least one if not more Vaporeons, and if you don’t have it in your team or in your gym, you’re playing the game wrong. Vaporeon is currently one of the top 10 Pokemon to have, it’s cheap to obtain and freakishly strong in regards to any other Top Tier Pokemon.

Let’s dig deeper into some of the problems with Vaporeon.

Vaporeon is too easy to obtain

You get Vaporeon by evolving Eevee for only 25 Candy and given you are able to control into which form Eevee evolves by naming it, this makes Vaporeon incredibly easy to obtain.

Eevee is commonly encountered no matter what region you live in and latest reports say Eevee is as common as Voltorb or Magnemite in city zones. So even if you don’t want one, you can always have a Vaporeon because it’s so easy to get it.

Vaporeon is better than Jolteon and Flareon

The difference does not stop there, here’s just a list of some of Vaporeon’s qualities that are just insane when you think about it:

Given all of this and the fact on how easy it is to obtain Vaporeon, it’s clear now that Vaporeon is in fact broken. Not only it’s broken, it’s hurting the game a lot. There is no reason to pursue Gyrados or Charizard – they’re gonna get destroyed by a gym full of Vaporeons. As reddit user Schnozzle wrote:

“Everywhere I go, I see Vaporeon as not only the Gym Leader, but filling most of the slots on that gym. They are almost always at 1100+ CP, meaning the trainers who placed them there have been playing hard enough that they should have access to several varieties of powerful Pokemon. I am not saying that low level players shouldn’t have access to strong pokemon. What I am suggesting is that the pokemon who take the most work should have some kind of a reward. It would be incredibly frustrating for me to catch 101 Magikarp to make that elusive Gyarados only to have it beaten by a pokemon I could have made on day three of playing.”

There were several suggestions on reddit on how to nerf Vaporeon but at this point the most likely one is that Vaporeon will just lose some of that ridiculous HP pool and get slower. It’s not clear on what Niantic plans to do with Vaporeon, but the only hope is that the solution does not include improving other Eevee evolutions, as that would push the entire meta to be even more Eevee centric.

We are all collectively guilty for abusing the fact that Vaporeon is so strong, but can we really be blamed for that? No, not really. It seems silly that the game is in this situation so fast but “Vaporgate” is not a problem that should be underestimated.

Note: We’re trying to reach out to Niantic about the Vaporeon issue but with no luck so far.