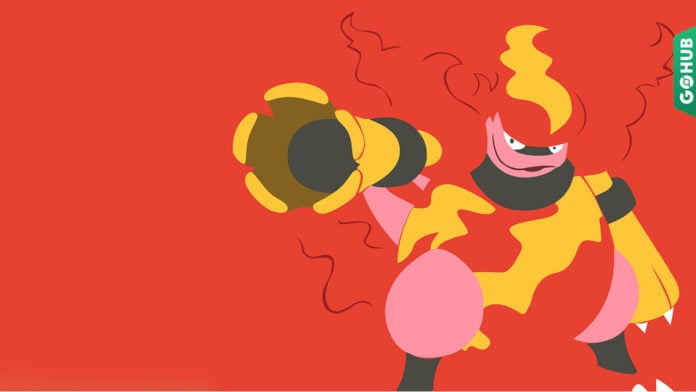 Pokémon GO Magmortar is a pure Fire type Pokémon and the final evolution form of Magby. Magmortar has a MAX CP of 2980, paired with an ATK of 247, DEF of 186 and STA of 150, which puts it as the fourth best attacking Fire type in the game behind Ho-Oh, Entei, and Moltres.

Magmortar will likely take 100 candy to evolve, and will possibly require a special evolution item to evolve: Magmarizer.

Magmortar in the Meta

Ho-Oh, Entei, and Moltres remain as the top 3 Fire type attackers in the game, but Magmortar will slot in as the fourth strongest Fire type — ahead of Flareon and Arcanine.

It should also be mentioned that Ho-Oh, while number one on this list, DOES NOT have access to a Fire type fast move thus making him more of a figurehead at the top rather than an actual useful Fire type due to the lack of STAB.

In this chart, we will look at Magmortar viability as a Fire type Pokémon and how it sizes up to some of the other popular Fire types in the game.

Traditionally, Pokémon GO’s Fire types sport a very high CP, coupled with an elite attack stat. Magmortar is no exception to this rule: with 247 Attack, it comes in second behind only Moltres and Heatran, slotting in ahead of Flareon and Entei. However, Magmortar has the second lowest Stamina stat of all Fire types: 150.

In other words, Magmortar is just a slightly bulkier version of Flareon.

Trainers who do not have a strong Entei or Moltres, or were not lucky enough to obtain one with decent IVs, will now have an option to obtain a solid, high DPS Fire type, rather than “wasting” a good Eevee on a Flareon.

Though there is no way to know for sure what moves Magmortar will have, we can look at its main series move pool, as well as the moves other high end Fire types already have access to, and we can compile a list of possible move sets for it:

The chart below will help you visualize what weather is beneficial or harmful for Magmortar.

Shiny Magby and Magmar are available in the game, which means a shiny Magmortar will be available also.

Magmortar’s pokedex entries from various games definitely give insight as why it is called the “Blast Pokémon”.