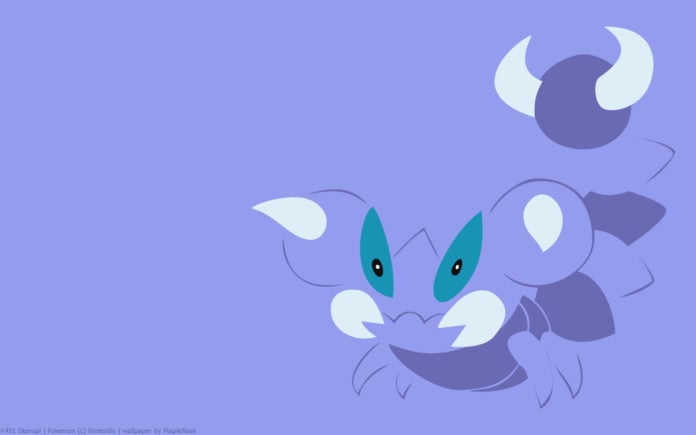 Pokémon GO Skorupi is a dual typed Poison and Bug type Pokémon, which evolves into Drapion, a Poison and Dark type. It requires 50 candy to evolve into Drapion.

Skorupi has a MAX CP of 1009, with an ATK of 93, DEF of 151 and STA of 120, its base defense is interesting as it’s higher than many fully evolved Poison types, such as Gengar, Victreebel, and Toxicroak, but its under par ATK keeps it a long way from the current Meta.

Skorupi’s Buddy Distance is 5km. Other Bug and Poison types such as Weedle and Spinarak have a Buddy Distance of 1km but their MAX CPs are significantly lower that of our subject.

Skorupi is currently available in 10km eggs. The maximum CP for a hatched Skorupi will be 576.

As a Poison and Bug type, Skorupi can receive a weather boost from both Cloudy and Rainy weather. Skorupi has a maximum capture CP of 937 when boosted to level 35.

While it seems unlikely that Skorupi would become a raid boss, recent raid boss shakeups show that anything is possible. Its evolved form, Drapion, seems a much more likely candidate for a Tier 2 or 3 encounter. However, if it were to be added as a Tier 1 raid boss it would sport a CP of 3408. The maximum raid capture CP for Skorupi (if it does become a Tier 1 raid boss) would be 576, or 721 if weather boosted.

For an overview of Skorupi’s evolved form, please view the Drapion guide.

Shiny Skorupi is noticeably different in colour compared to its normal form; it trades up its standard blue/gray for a light/dark red ensemble.

Skorupi’s Pokédex entries from various games give insight as why it is called the “Scorpion Pokémon”, focusing on its tail, claws and poison. The entries also highlight our little bug as an ambush predictor.