Best counters for Deoxys Attack Forme are strong Dark and Ghost Types like Tyranitar, Absol, Honchkrow, Weavile, Gengar and Shadow Ball Mewtwo. Deoxys Attack Forme is the new EX Raid boss in Pokémon GO, replacing its Normal Forme, and coming to us after December 20. Deoxys Attack Forme is a pure Psychic type, with a boss Combat Power of 41036 and 15000 stamina, meaning this forme can potentially even be soloed (even while boosted during Windy weather).

Deoxys Attack Forme can be caught with the following CP Values:

Attack Forme raid counters are very similar to the previously listed Normal Forme counters, so you should already have some of these powered up by the time you face this second Forme of Deoxys. A table that compares Times to Win and Death Count is available below. Deoxys Attack Forme is weak to Dark, Bug and Ghost type moves.

*Legacy or soon to be legacy move

Since the Type effectiveness changes your best bet would be to use Pokémon with Dark, Ghost and Bug type attacks. But as it’s easy to solo, you can pretty much use any good counters of the right type. 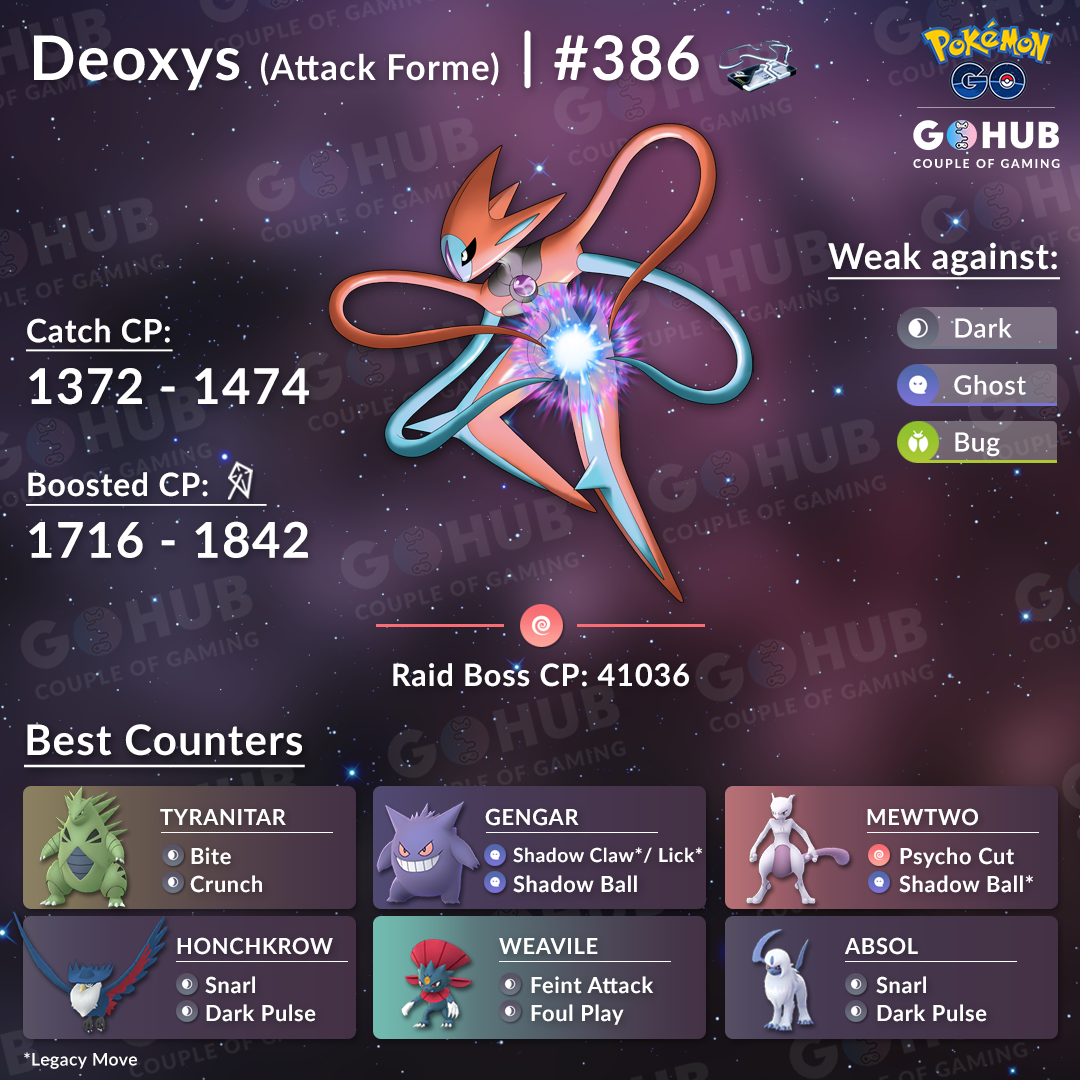 As of now, these are the moves that Deoxys Attack Forme has access to in the Game Master:

The only move you should be afraid of is Dark Pulse, as it will be super effective against your Ghost and Psychic-type Pokémon.

Here’s how Deaths and Time to Win look like when fighting a Zen Headbutt / Dark Pulse Deoxys (Attack) (output via GO Hub database):

If I had to give a recommendation: don’t be concerned over which moves this boss has. Only Dark Pulse should give your Pokémon any concern, but even then the battle should be easy for most trainers. Attack with your best team, be it a Tyranitar army, legacy Shadow Ball Mewtwo, or even some Houndoom, it’s not a terribly hard battle.

And here are its new updated stats:

Deoxys, being a pure Psychic type, will be boosted in Windy weather.

If you do not have access to any of the fine counters listed above, do not fret, for we have some other recommendations that will still be pretty good against this alien:

If you have already done EX raids for Deoxys Normal Forme, this Forme should be easy and you probably already have counters for it, so your only worry should be getting that EX Raid Pass. Good luck Trainers!