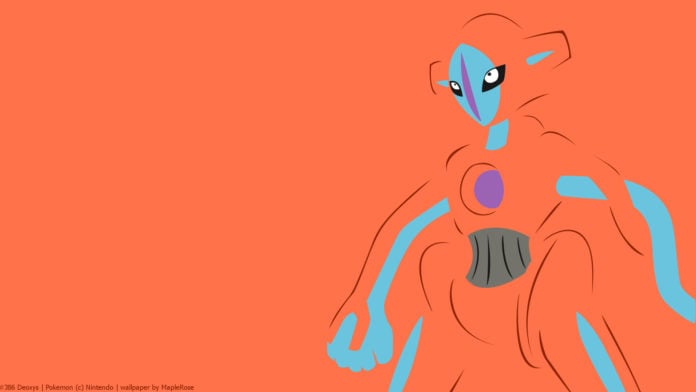 Normal form Deoxys is a new EX Raid boss in Pokemon GO, replacing Mewtwo after more than 12 months. Deoxys is a pure Psychic type, with a boss combat power of 45891 and 15000 stamina. This guide lists best Deoxys counters, Deoxys EX Raid counters, form stats and which moves Deoxys can have in Pokemon GO. For more information about Deoxys’ role in the Pokemon GO meta game, read our Deoxys, Deoxys forms and their place in the Pokemon GO meta article.

Updated on 10-1-2018 to include new Deoxys counters for Normal Forme only.

A list of the best Deoxys counters based on typing and competitive viability. Deoxys raids are very similar to Mewtwo, so you should already have some of these powered up by the time you face Deoxys. A table that compares Times to Win and Death count is available below. Deoxys is weak to Dark, Bug and Ghost type attacks.

*Legacy or soon to be legacy move

It has been confirmed that so far you will only be battling against Deoxys Normal Forme, so basically you will be dealing with a less tanky, higher damage dealing Mewtwo. The good news is though while Mewtwo had a fantastic movepool, as it stands Deoxys is lacking, so you can bring out your glass cannon Gengars more often to deal major damage without fear of Confusion ruining your day. As well, we have these recommendations and explanations below: 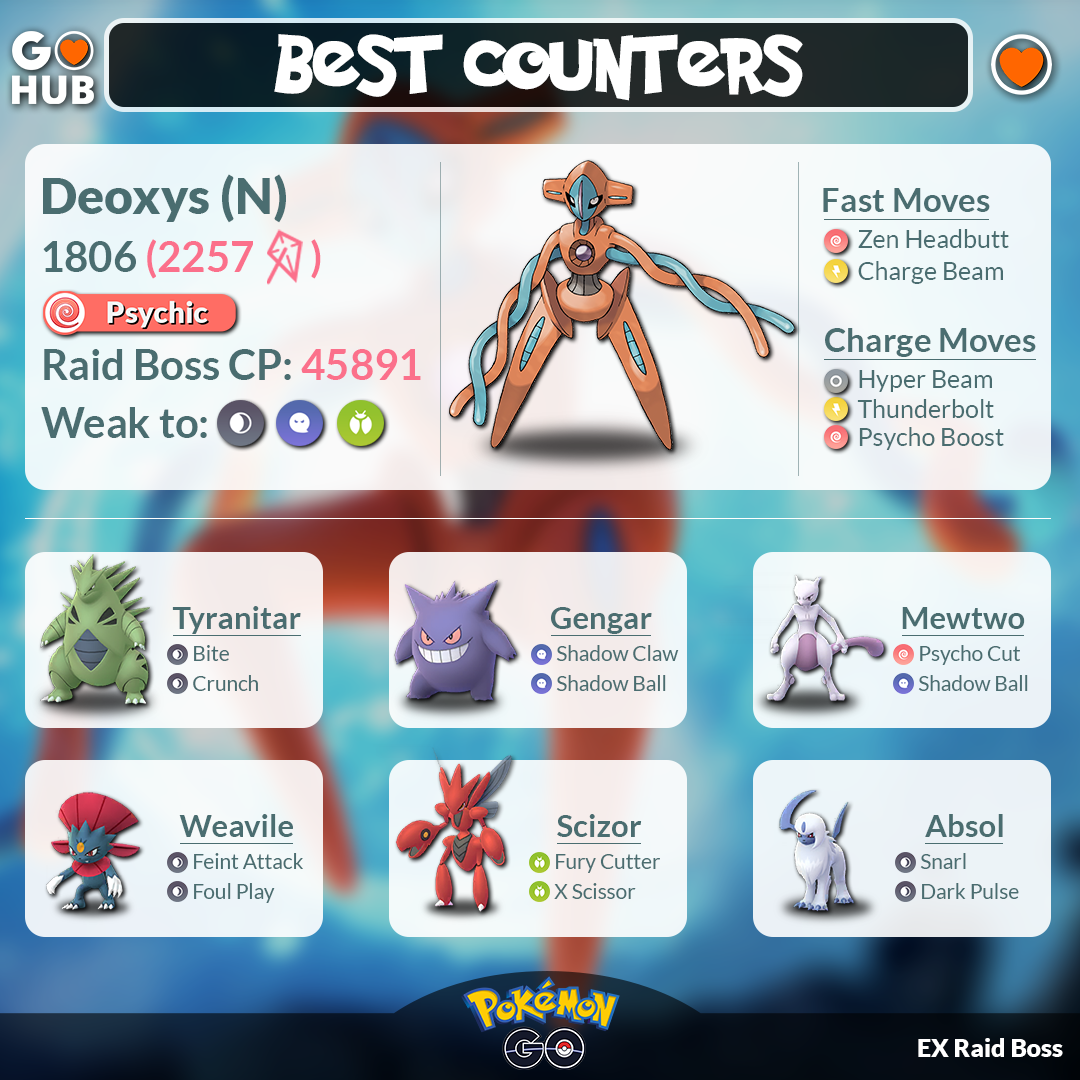 As of now, these are the moves that Deoxys Normal has access to in the code:

There really is nothing to fear moveset wise from Deoxys. When your worst case scenario for Time to Win is it using Zen Headbutt and Hyper Beam, you have nothing to be concerned over.

Here’s how Deaths and Time to Win look like when fighting a Zen Headbutt / Hyper Beam Deoxys (output via GO Hub database):

If I had to give a recommendation: don’t be concerned over which moves Deoxys has. When attacking it, it simply has nothing hard hitting to give your Pokémon concern. Attack with your best team, be it a Tyranitar army, legacy Shadow Ball Mewtwo, or even some Houndoom, it’s not a terribly hard battle.

Deoxys capture CPs are based on level 20/25 10/10/10 to 15/15/15 IV ranges on each forme, however this is no guarantee that this will actually be possible as we do not know how they will be implemented:

We do have each forme’s stat composition, for the curious readers:

Deoxys, being a pure Psychic type, will be boosted in Windy weather.

Windy weather is what you want to get a boosted Deoxys, but not what you want if you end up having to cut corners to short-man this raid. Fog weather is the supreme counter weather, boosting both Ghost and Dark moves, making your Gengars, Shadow Ball Mewtwo, and Tyranitars even more beastly. This is a rare weather in most parts of the world, especially during raiding hours, so a good substitute is to fight in the Rainy weather, where it boosts the likes of even Pinsir and Scizor to surpass all other counters in TTW, for certain movesets like Counter/Psycho Boost.

If you do not have access to any of these fine counters above, do not fret, for we have some other recommendations that will still be pretty good against this alien:

Though very superficial, we can expect prepping for Deoxys to be easy. We had to prepare for Mewtwo, who has been discovered to be more tanky than before and possess tier 6 stats of Stamina, so a less-tanky, worse moveset alien will be no contest when new EX Raids come out. Happy training, good luck getting an EX pass!