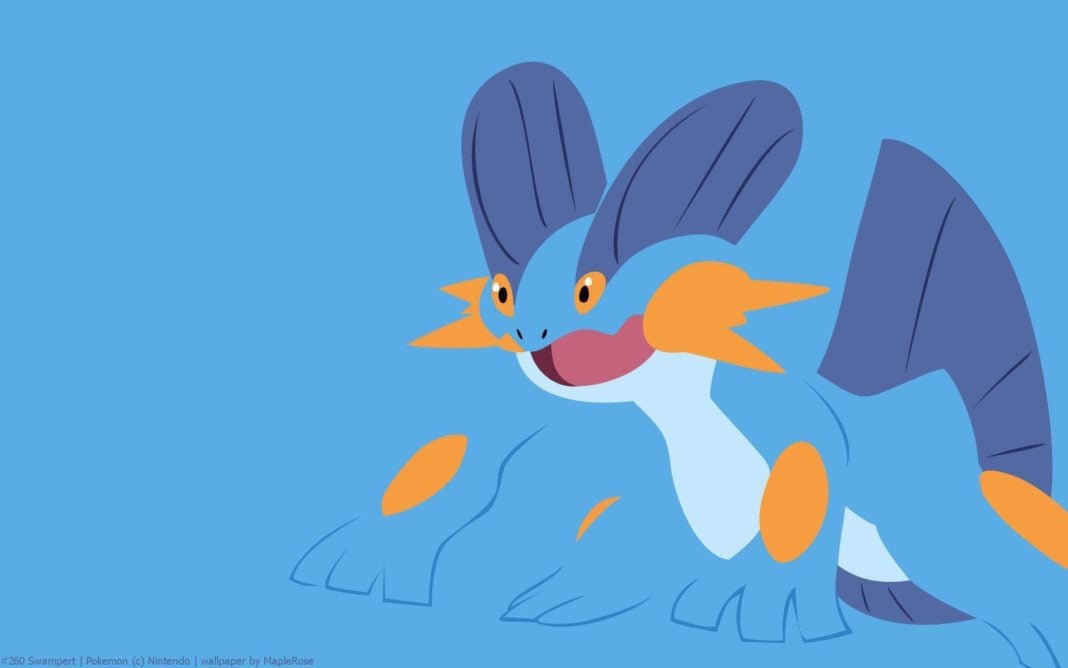 Hydro Cannon, has been confirmed as the signature move for Swampert this Community Day. In PvE (gyms/raids) it is a 2 bar move with 90 base power and a cooldown of 1.9 seconds. In PvP, it takes 40 energy and again has 90 base power.

Swampert is the first Water starter to have dual typing. The addition of the Ground-type turns Water-type’s typical weakness to Electric into a resistance, but doubles the weakness to Grass. This interesting type combination with only the one weakness has resulted in Pokémon with the WaterGround typing to become favorites in the PvP scene. Furthermore, with both Water and Ground moves being Effective against Fire and Rock Pokémon, Swampert can take advantage of STAB for moves of both types while fighting Raid Bosses.

*DPS and TDO are calculated using Level 40 Pokemon with perfect IVs and a 200 DEF defender model. The values displayed here should be compared only among themselves and represent DPS and TDO approximations.

From the data listed above, it is clear that Hydro Cannon makes Swampert a total beast. When paired with Mud Shot, Swampert becomes the highest DPS Water attacker. Its TDO is noticeably lower than Kyogre, but comes in a close third behind Palkia. With these great Stats, Swampert becomes the Pokémon that dispose of Groudon the quickest. It also becomes the third-best Entei counter (terrible timing, exactly one week late), and fifth-best Heatran counter. In both cases, most of the Pokémon that outperform HC Swampert are rare or legendary and would require significant Candy and Stardust to power-up. Rampardos and Kyogre in the case of Entei, and Groudon, Garchomp, and Rhyperior in the case of Heatran. While a high-level Swampert isn’t uncommon. Furthermore, in most cases, Swampert faints at the same rate as all other counters, something not true for Rampardos.

It is important to note that Flying Pokémon have a double resistance to Ground moves. This means Moltres and Ho-oh have a single resistance to Ground moves; therefore, Swampert must use it’s less optimal Quick Move – Water Gun. Plus with both having a double weakness to Rock and the overabundance of powerful Rock attackers, Swampert should sit the bench against these two.

Currently, Hydro Cannon has the best DPE of any charge move in PvP, with 2.25. On top of that Mud Shot is one of the best EPT Quick Move in PvP, with 9.00. This means the combination of the two allows Swampert to quickly and regularly fire off a high power Charge Attack. This move combination on top of the great Type Combination means that Swampert will dominate PvP. Although in Great League it’s high Base Stats require a lower Level to stay under the 1500 CP threshold than the other Muddy Buddies: Whiscash, Quagsire, and Marshtomp, this new move combination puts Swampert back in the running. When it comes to Ultra and Master Leagues, the other three get left in the Mud because their Max CPs are all significantly under 2500.

Watch out for Grass-type Moves when using Swampert, or any dual Water Ground Pokémon – the four times weakness spells disaster.

Hydro Cannon Swampert is an Exclusive Move Pokémon not to be missed; being both useful for raiding and all three PvP Leagues. While these three uses require vastly different CPs, Community Day is the perfect time to stock up on Candy and Stardust, and find the perfect Mudkip(s) for each job. Additionally, Swampert will have little future competition, especially with Hydro Cannon.

As with every Community Day Exclusive Move – you can never get Hydro Cannon Swampert after 8 pm Sunday 7/21; but you can always trade, transfer or TM a new move after.

Lastly, if you want to use Swampert in PvP and don’t want to use any Stardust lookout for Mudkip in the 520-571 or 887-953 ranges for Great and Ultra Leagues respectively, while not guaranteed, check an IV calculator to be sure, these ranges are your best bet.

Tentacruel is a dual and type tier...

Trainers!  The much-awaited box legendaries of Pokémon Sun and Pokémon...

Inkay is a dual and type tier...