Hello Trainers! Pokémon GO 0.169.0 is slowly rolling out through the Google Play Store and the iOS App Store.  In addition to the update, a few smaller things were pushed to the Game Master File as well.  There is a lot to cover in this one from: new searches, new costumed forms, to more code for Elite TM’s and more!

You can find the official release notes here.

With that said, let’s get into it!

Code involving the much anticipated Elite TM’s has been discovered.   It appears they will work like everybody assumes they will, use the TM and pick the move you want.

The search term evolvenew will show you all Pokémon that you can evolve into a Pokémon you haven’t encountered yet.

You can now search for Pokémon you caught a specific number of days ago.  This has multiple uses.

It appears news will be able to be filtered?

3 new costume forms have been found, Dragonite, Onix and another Pikachu.

Aeroblast has been added to the game in anticipation of Lugia’s weekend.  No stats yet, we’ll keep you posted.

New Text when TMing a Move

Niantic has updated the text you see when you TM a new move onto one of your Pokémon, a nice throwback to the main series games. 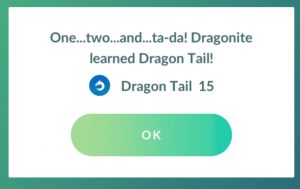 New badges for the St Louis Safari zone which was just postponed.  You can read more about that here, and the Liverpool Safari zone.  (There are badges for every day)

New hatch animations for Pokémon that are considered “Costume” Pokémon.

The animations for evolutions were updated as well.

A couple of new icons were added to the buddy tutorial, they are on the first screen.

Probably for easier handling of awarding extra battles for events and such.

Looks like a fix to the battle party’s refreshing unexpectedly.

Code for when you add a best friend back as your buddy?

Chances are this is for a future special research quest that will require a gold Unova badge.

Probably for easier handling of the messages we see in-game.

Not sure, however, this looks like it will hide the edit button on Pokéstop’s and gyms if you are out of edits.

There was a lot of code added surrounding injections, pooling and asset components.  The code will allow Niantic to better compartmentalize their code to make it easier to troubleshoot bugs and develop new features without them impacting existing features.  Essentially this is a behind the scents QoL update.

It would appear that updates to the way assets are handled in-game in relation to the game master file.   This is a good news/bad news deal.  The good news is this may make for a smoother, speedier game.  The bad news is that this new system may prevent data miners from discovering new quests and game texts ahead of time.

Does Niantic need a vacation?  Is that why we got two months of constant events?  Are they taking April off?  No.  But seriously, no clue.

Is Professor Willow getting a new computer?

As mentioned at the top, there were some updates to the Game Master file as well.

Tickets for the Abra Community Day paid event will go on sale on March 14th at 8 am, and it will run from 11 am until 6 pm.

The item drop level for the below items was reduced from 100 to 1, meaning that Niantic can now flip the switch to have them drop from Pokéstops or add them as research rewards.

Chances are this is to do with the Go Battle League event, if you win all 5 of your battles on the Premium track you will get your Battle pass back.

Looks like some really cool things are being added to the background of the game to make it run smoother, and not only help Niantic catch and squash bugs that pop up but prevent them in the future.  So that’s good.

It also looks like we’re getting costumed Pokémon for every season this year, does that mean we’re getting more events with Kanto starters wearing hats?

The new search filters are fun, being able to filter by year or how many days old is neat.  I’m sure there’s some use for them, probably around trading and trying to get lucky trades with older Pokémon.