Hello Trainers! A few interesting things were pushed to the game master file overnight, including references to unannounced Safari zones, the potential ability to earn coins from field research, dialogue for next month’s Safari Zones, and more!

With that said, let’s get into it! 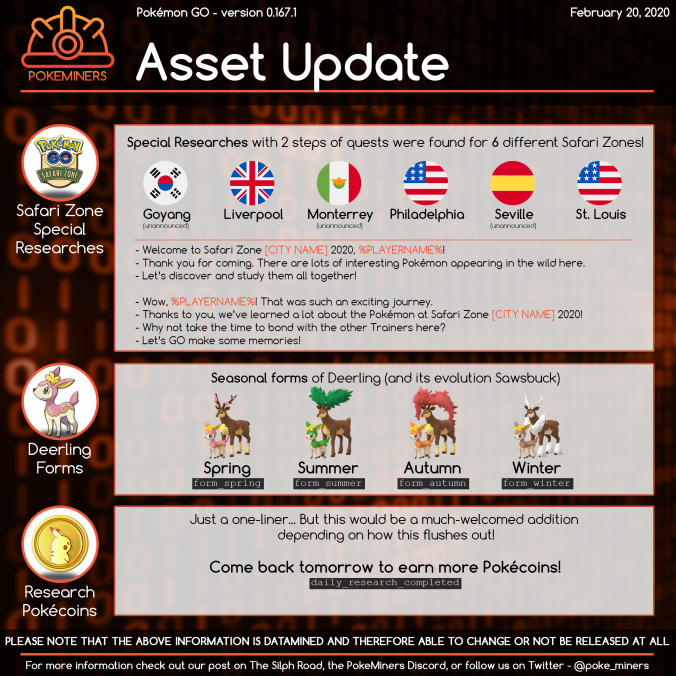 Not much detail, but it looks like we may be able to earn daily pokécoins for completing research. Perhaps we’ll have to complete a certain amount of research tasks per day to earn the coins? No word how many coins per day either.

These seem like event quests but are not specifically tied to a named event. (Speculation is Niantic is getting sneaky… shh!)

Quest dialogue and title for next month’s Team Go Rocket special research has been added. I didn’t include it all, I’m sure you all know what’s up by now.

More detail surrounding the best buddy badge that’s been referenced previously, so we’re getting closer to a potential release.

Another update to the Deerling forms, so they may be preparing for a release soon? Hopefully before the end of winter so we’re not waiting until next winter for that form’s release. It would be really neat if they release these based on the seasons of the Northern and Southern Hemisphere. We’ll see…

Here’s a reminder of what the Deerling and Sawsbuck forms look like:

Code involving the potential for new ways to log into the game, including one for Apple

Looks like generic quest texts for all Safari zones

It would appear that quest dialogue for three yet to be announced Safari zones have been discovered as well. A word of caution before getting excited about these: They are not officially announced, so they may not happen. This is potentially code written up for finalists who didn’t make the cut that made its way into the game by accident. So, temper your excitement, please.

Quest dialogue for the three officially announced Safari zones were discovered as well.

Lots of potentially exciting stuff there. The potential to earn Pokécoins through field research would be a welcome addition especially for free to play players. If it does come to pass, as this is the first reference we’re seeing to it, it’s potentially a while away.

The announced Safari zones are potentially exciting for trainers who live close to those cities! Again, these haven’t been announced by Niantic so don’t get your hopes up just yet!

Hopefully, we see Deerling and Sawsbuck soon. I would love it if Niantic released these as sort of a shifting regional type. Keeping in line with the seasons of the Northern and Southern Hemispheres.

Do you live close to, or in, one of the Unannounced Safari zone cities? Are you potentially harbouring some maybe excitement? How do you think the potential for coins from field research might go? Do you think the regional aspect of a Deerling/Sawsbuck release is a good idea?  Let me know in the comments!

One final reminder, the things in this article are all speculative and may or may not happen.

As always, stay safe out there trainers!