A PvP Analysis on Cobalion, Virizion, and Terrakion

The Swords Of Justice 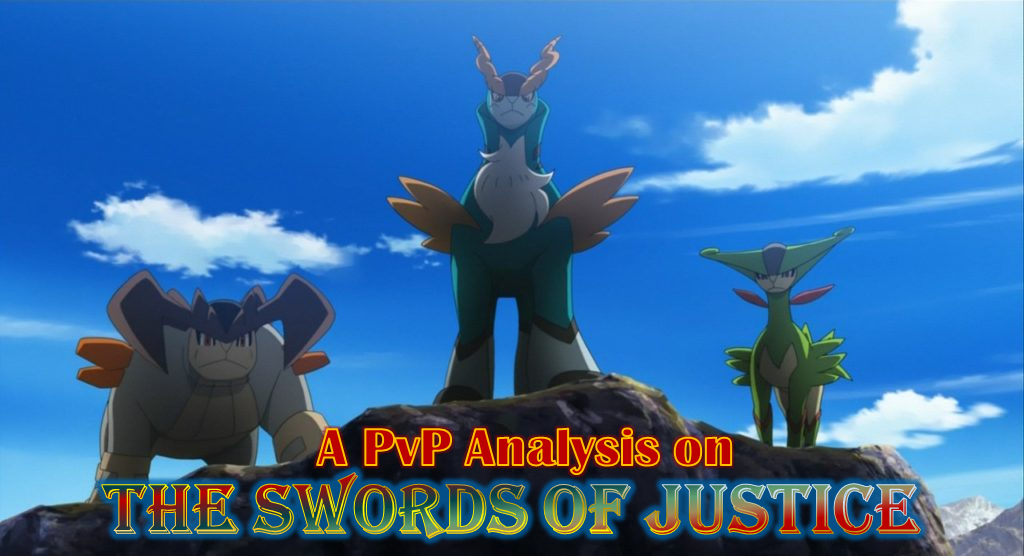 The “Under The Lights” article series provides some deeper dives on Pokémon of particular interest in PvP. Today, that means a quick look at the three members of the Swords Of Justice we have in Pokemon GO: Cobalion, Virizion, and Terrakion.

I actually didn’t plan to write specifically about them, but I’ve gotten many questions and hadn’t seen any in-depth analysis on them yet, so I figured I’d squeeze my own analysis in and hopefully answer my fellow players’ questions. So let’s dive right in and put them all… under the lights.

Let’s start by looking at the stats and do some quick analysis on what differences there are between the three:

Next are the typings. All are half-Fighting, which comes with weaknesses to Fairy, Psychic, and Flying, and resistances to Dark, Rock, and Bug.

So by stats and typings alone, you would probably expect Cobalion to be best overall (best bulk and great defensive typing), then perhaps Virizion (also best bulk but so-so typing), and then Terrakion, right? Well, let’s see how that shakes out…

Starting with the one with the most (on paper) promise. Now Cobb here has already had Sacred Sword for a while, unlike the other two. It’s an exact clone (other than typing, of course) of great PvP moves Body Slam and pre-nerf Weather Ball: 35 energy for 60 damage. (The Weather Balls were nerfed down to 55 damage not long ago.) That’s actually really good, and strictly superior to acceptable PvP Fighting moves Brick Break (35 energy for 40 damage) and Cross Chop (35 energy for 50 damage). To reiterate: Sacred Sword is a GREAT PvP move!

Anyway, back to Cobalion. Like I said, it’s had SS for a long time now… and that’s actually ominous, because uh… have YOU seen a lot of Cobalion in PvP? I sure haven’t. And there’s a reason for that…

It has the most resistances, that’s true, but consider what it’s weak to. Fire and especially Ground and Fighting are omnipresent throughout all leagues… the vast majority of teams have one or often more than one. The other big problem is Cobb’s moves. It has Stone Edge and Close Combat as the others do, and while Iron Head is kinda lousy, between SS and the other options, the charge moves are overall fine… but the fast moves are another story. All three of the Swords Of Justice are stuck with Zen Headbutt, an absolutely atrocious PvP move with below average damage (2.67 Damage Per Turn) AND energy generation (only 2.0 Energy Per Turn); 3.0 is considered “average” for both measures. Thankfully, they all have a second fast move option… but Cobalion’s is Metal Claw, which is better than Headbutt but still below average (3.0 EPT now, but only 2.5 DPT… blech). That really drags it down. Cobalion is actually NOT terrible in Ultra League if you run it with double Fighting charge moves or even Stone Edge for coverage, but that’s not a performance that’s going to work on most successful teams. Something like Machamp is just a bit better (and MUCH cheaper). Cobalion does have advantages, being able to stand up to most Charmers and Dragon damage, and a couple of others like Venusaur and Gengar that Machamp cannot handle, but it completely flops against Fires (Talonflame, Charizard), Ground damage (G-Fisk, Politoed), Fighters (Scrafty, Poliwrath, Obstagoon, and of course Machamp) and even most Steels (Melmetal, Escavalier, Empoleon, Registeel), all of which Machamp handles rather easily. I just don’t see a role you’d want Cobalion for that other, cheaper things don’t already handle better.

It’s the same story in Master League. Yet again, Cobalion does handle Fairies, even the suddenly-everywhere Zacian, as well as new threat Zarude and hey, even Dialga! (Well, unless it has Thunder… but still!) But unfortunately, that’s where its usefulness ends. That lags FAR behind Machamp and even generally less-favored Conkeldurr.

Like I said, there’s a reason you haven’t been seeing many Cobalion. Several reasons, actually.

Ready for a shock? Virizion is actually worse in Ultra League with Sacred Sword than it is with existing Close Combat! Forcing SS means losses to Abomasnow, Snarl A-Muk, Venusaur, Sirfetch’d, and Shadow Machamp, all of which Close Combat has the power to defeat. Unlike Cobalion, Virizion has a decent (though non-STAB) fast move in Normal-type Quick Attack (only 2.5 DPT, but above average 3.5 EPT), and has pretty good energy gains to race to Leaf Blade and the Fighting move of choice. Close Combat is therefore relatively quick to come, and Virizion already HAS great spam with Leaf Blade, so Sacred Sword is kind of superfluous.

The one good thing I can say is that in Master League, Sacred Sword allows Virizion to do something it couldn’t before: beat Dialga. Close Combat is still overall better (getting more consistent wins over Garchomp and Yveltal), but if you have to hang your hat on something in Master, beating Dialga ain’t bad at all.

Just one to go, the one that seemed initially like it might be the worst of the bunch. Get ready for that notion to be turned on its head…

Terra is a funny one. It has a punishing fast move with Smack Down (only 2.67 EPT, but a great 4.0 DPT), which is how it actually gets the majority of its wins. Its current charge moves are Rock Slide (45 energy), Close Combat (45 energy), and Earthquake (65 energy), so a 35-energy move in Sacred Sword paired with Smack Down’s low energy gains would seem to be a godsend. But at least in Ultra League, that’s not so much the case, as Sacred Sword seems like a mere sidegrade to Close Combat. Sacred Sword DOES allow Terra to barely outrace Lapras and potentially bait its way to victory over (Hex) Jellicent, so those are nice, but it lacks the raw power to beat down Psychic (the move) Umbreon like Close Combat can. (Also note that SS shows a loss to Gengar, but you actually typically win that by going straight Smack Down and never throwing a charge move, so I don’t count that as a loss.)

However, we’re gonna end this mostly disappointing article on a good note: with Terrakion in Master League.

Check out Terra’s current best: Rock Slide and Close Combat. (Earthquake has play too, if you prefer, doing everything CC can except beating Snorlax.) But now, when we add Sacred Sword into the mix… whoa! For the record, we’re basically doubling Terrakion’s win total with the addition of Sacred Sword! Smack Down/Rock Slide is still enough to beat Lugia, but Sacred Sword tacks on Dialga, Magnezone, Play Rough Zacian (even a resisted Sacred Sword makes the difference between beating Zacian to Play Rough or not), Zekrom, Mamoswine, and Heatran, and shores up wins versus things like Snorlax too. It’s still not a GREAT performance (a 40% win rate against any core meta is nothing to brag about), but it is undeniably a vast improvement for Terrakion that makes it at least spicy in Master League instead of something to just get you laughed out of the room.

So now all that’s left is our TL;DR:

Oh, one last thing: I always get a lot of questions on IVs. I breezed past this even more than usual in this particular analysis in the interest of time, but I would direct your attention to pvpivs.com. Here is their Top 10 for Ultra League Terrakion with raid level IVs and traded IVs (Ultra Friends). Play around with that for other ranges and for Cobalion and Virizion, if you so desire.

And that’s it! I guess this still ended up being a bit long… sorry about that! 😅 Hopefully it was a good and informative read. Until next time, you can always find me on Twitter with near-daily PvP analysis nuggets or Patreon with its tie-in Discord server you can access to get straight through to me for personalized answers to your questions.

Continued thanks to my PvP friends, local and around the world, who have lent their own ideas and suggestions over the last nearly two years of PvP play, and helped teach me to be a better player and student of the game.

And thank you for reading. I appreciate your attention and encouragement. Catch you next time, Pokéfriends… stay safe out there!