We’re kicking off a new article series, called Trainer Battle Academy. Trainer Battles Academy is aimed to provide our readers a strong set of foundations for building their Pokemon GO PvP teams, understand PvP mechanics and collectively raise the knowledge bar when it comes to Trainer Battles. With the recent announcement that Trainer Battles are officially going competitive (First Official Pokemon GO PvP Tournament takes place at 2019 Pokémon World Championships), we feel like the interest in PvP will significantly grow over the next few months.

In Pokemon GO, moves have two set of stats: one for Gyms and Raids and another for Trainer Battles. Additionally, moves can have special status effects in Trainer Battles: raise attack, lower opponent defense, etc. Just to confirm that we’re all on the same page, PvP stands for Player vs Player and PvE stands for Player vs Environment. In this article, PvP = Trainer Battles (Team GO Rocket battles included) and PvE = Gyms and Raids. Unfortunately, if you’re coming from a heavy PvE background, everything you know about good and bad moves is probably not applicable in PvE.

There are a few stats that define every move in Trainer Battles:

For charge moves there are no explicit bars, but the Energy requirement somewhat emulates the mechanic. Determining which moves are good and which are not quite useful can be done by observing three metrics, but the story is a bit more complicated than that.

The key metrics for Pokemon GO PvP moves are:

Pokemon GO PvP Fast moves create energy when used, which can later be used to fire off a Charge move. Unlike Charge moves, Fast moves don’t have special status effects. As each fast move has a different duration, we use DPT and EPT to describe their performance. This is not an exact science, but it does allow for particular moves to show their worth.

Ideally, for fast moves you’re looking for a move that has both high EPT and high DPT, for example Dragon Breath which has 4 DPT and 3 EPT. It’s widely considered that 3 DPT and 3 EPT is the rough baseline for fast moves in PvP . These moves are quite good, but they do not excel at any role. If your moves have both scores lower than 3/3, you should consider replacing them.

Here’s a good rule of thumb:

Keep in mind that there is no single rule that makes a Fast Move good. In Pokemon GO’s PvP it’s all about the interplay between fast and charge moves, which is a topic we will elaborate in depth later in this article.

The chart above shows how Pokemon GO fast moves rank up in terms of Energy per Turn and Damage Per Turn, but also shows you how some moves are similar. Moves on the right side do more damage per turn, and moves closer to the top generate more Energy per turn. It’s easy to see why Shadow Claw and Counter are so highly rated.

In general, you want a good fast move whenever you can possibly get one – it’s free damage and essential fuel for your charge moves.

Multiplying DPT and EPT enables us to rank and showcase well rounded PvP moves. These moves are not optimal in all situations, but they are highly usable on a variety of Pokemon:

Pokemon GO PvP charge moves cost energy to use, deal a large amount of damage and some of them even have special effects that can change your or your opponents stats. Similar to Fast Moves, some Charge moves are strictly better than others. The main metric for comparing charge moves is DPE (Damage per Energy), which describes how much damage you output per Energy point spent. DPE ranges from 2.25 (Hydro Cannon) to 0.25 (Frustration).

Charge moves in PvP require a different amount of energy than PvE moves, ranging from 35 to 100 and they don’t have “bars”. Using a fast move fills up your “energy pool”, which can get up to 100 energy stored. You can estimate the status of your energy pool by counting the number of times your fast move has activated, or simply by observing the “fill level” of one of your charge moves.

If your charge move can be activated, you can still gain energy from Fast moves, provided that you are not already capped at 100 Energy. This allows for an interesting strategy:

Both strategies are valid and their usage will depend on your desired effect. 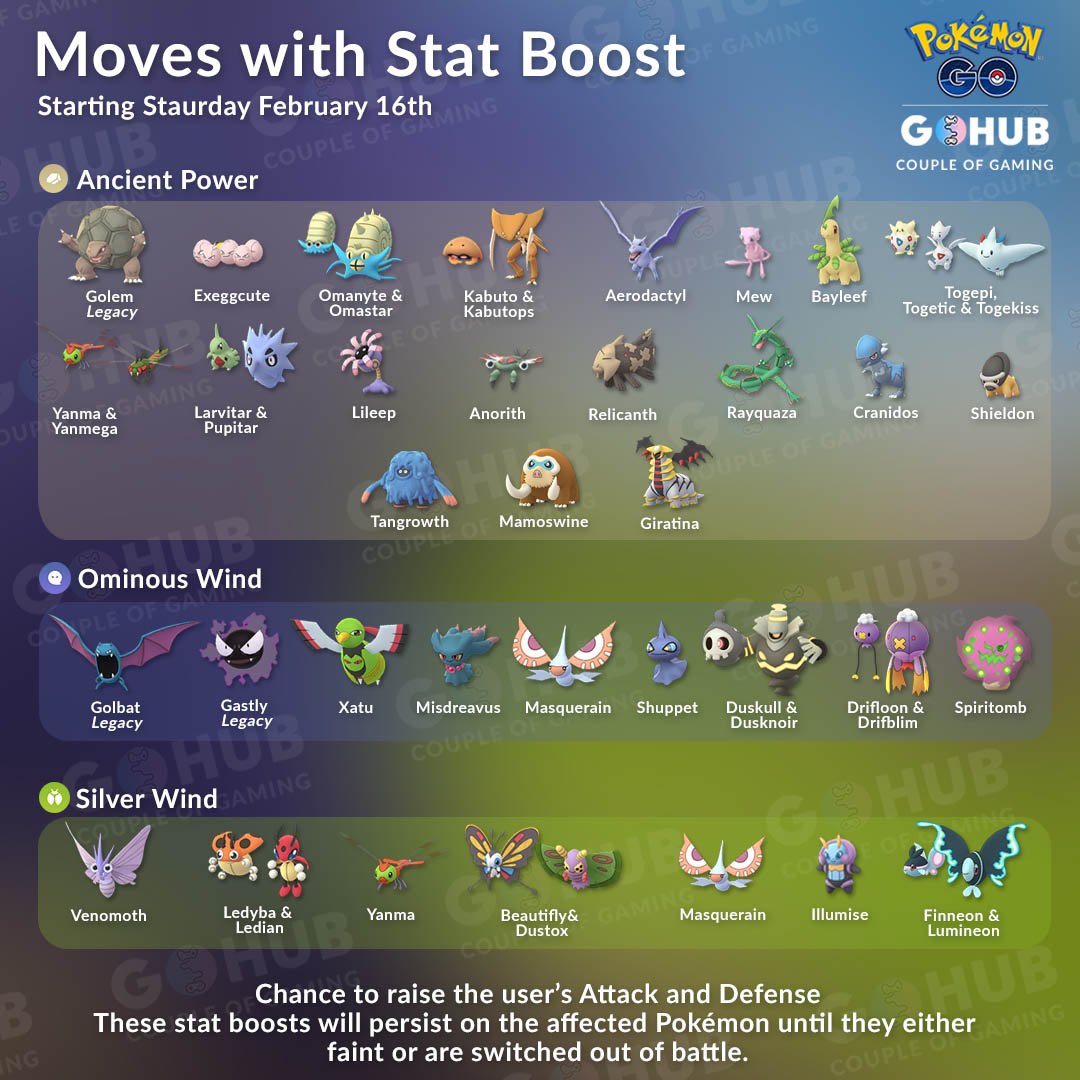 Ancient Power, Ominous Wind, Silverwind, Power-Up Punch and Acid Spray can affect attack and defense of your Pokemon or the opponent. These moves are rather niche, as you don’t control when and how they’re activated, so they are often not as useful as you would think.

Power-Up Punch is powerful, the rest is fine(ish) – if you have access to Power-Up Punch on your Medicham use it. Acid Spray is an awkward one, as it costs a lot of energy and only reduces the opponent’s Defense. For Acid Spray, you want a high EPT fast move to activate it soon, but you want a high DPT fast move to take advantage of the reduced defense – confusing! As you can see, these moves are situational and you shouldn’t worry about them.

These ones are taken straight from our Database, and they are grouped by energy cost. In order to get the full list, go to the PvP Charge moves table, sort by Energy and then hold the Shift key and sort by DPE:

The interesting thing about Charge moves is that you should always go for a mix of high damage and low energy ones, as well as two different types where applicable. Low energy charge moves serve to force shield usage from your opponent, while high damage ones are often trumped by simple type effectiveness.

In order to have a Pokemon that’s viable for PvP, you should always have two charged moves:

Let’s take a look at Lucario’s optimal move set for example (although it’s a bit unfair as Lucario has been blessed by the fabled Steel second type):

A setup like this doesn’t make any sense, as Hydro Cannon and Hydro Pump cancel each other out and they do not provide any additional type coverage. What if your opponent has a Roserade? Or a Venusaur? Hydro Pump will not save you there, you will likely faint before you can even fire it.

I hope this was useful, as a lot of Trainers have asked us to help them understand PvP basics. We’ll continue our Trainer Battles Academy series onward, one topic at a time. Until next time, see ya! (Post your questions in the comments, we’ve got eyes down there)