Last month we had our annual spooky Halloween AR Showcase, so this year we decided to ask to see your best images of Legendary, Mythical, or Ultra Beast Pokémon. It’s been a while since we’ve done a Legendary theme, and we couldn’t help but include Ultra Beasts and Mythicals too.

‘Celebi waited with her hands outstretched to catch the falling ginkgo leaves.’

‘Secrets of the S.S. Anne’ by mingosanch, Seattle, WA, USA.

‘Just as I was about to board the S.S. Anne, I noticed a pickup truck that seemed to be out of place. Once I got close, I heard a faint noise coming from underneath the truck. Sure enough, after my Pokémon pushed the vehicle, a strange Pokémon emerged!’

‘Enjoying autumn in Japan. I’m coming to see the autumn leaves that are dyed red.’

‘I was messing around with AR mode and my camera ended up glitching out thus giving this shiny giratina an ominous pose which made it look like it was looking over the whole town.’

‘Wish Upon a Christmas Star’ by 1ejlmd89, Manila, Philippines.

‘Team Rocket strikes again, and this time they did their dirty deeds at the east coast of Florida, destroying it. I was able to capture the beast that caused the destruction, and hopefully I can purify its heart.’

‘A scene engraved in the hearts of Japanese.

A night we cherish deep inside of us.’

‘When I put Shaymin on the quietly blooming flower, it seemed to be basking in the sun and feeling good.’

‘Hoopa Unbound is one of the most majestic looking Pokémon for me! After the raid, I had to click an AR pic for sure :D’

‘I have been wanting to do this photo for awhile and wanted to wait till I go to the beach to take this snapshot. I used group ar mode with my dad’s account to help achieve this photo. Me and my family have been playing for awhile and gen 3 has a special place in my heart so I wanted to capture the fight between these two amazing legendaries that takes place in the games.’

‘Known as a child of the stars in ancient times, Cosmog isn’t of this world. Filled with untapped potential, it can often be found gazing upwards towards the Sun and Moon.’

‘Singing in the warm sunshine’

By shinyshinx.science, Territory of Treaty No.8, Alberta, Canada.

‘Do you stand on Native Land? Treaty No. 8 was signed on June 21, 1899. It is a framework that promotes the co-existence between peoples and the sharing of resources, both renewable and non-renewable. It encompasses approximately 840,000 kms and is home to 39 First Nations communities. Source: https:\\nativeland-ca’

Victini seemed to say that it is victory to connect peace with a smile.’

‘Rising above the earliest sunrise in North America, Ho-Oh shimmers in the morning glow. ‘ 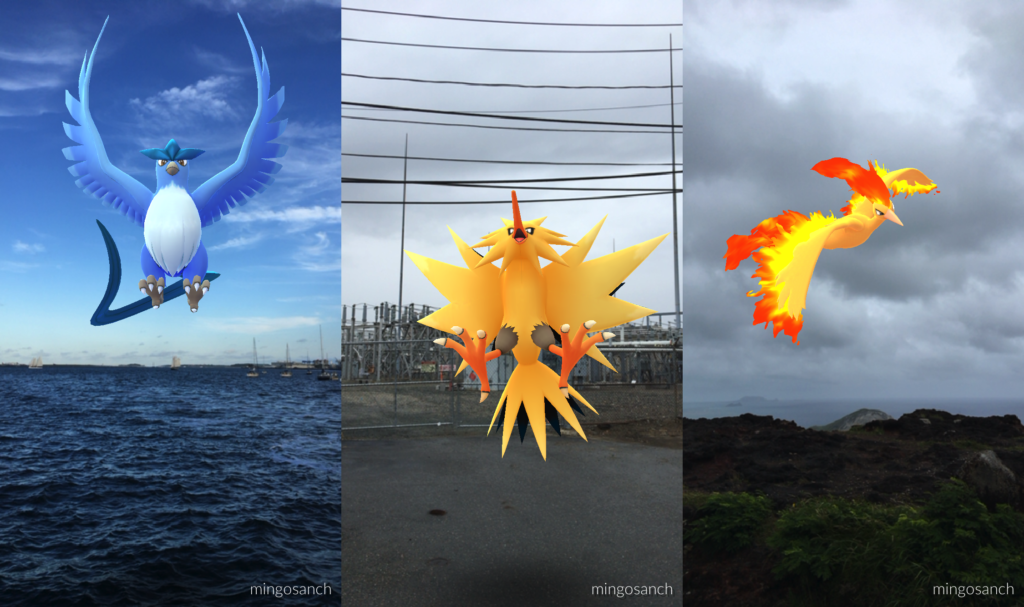 ‘Back in the early days of Pokémon GO, it wasn’t possible to take AR photos outside of wild Pokémon encounters. Even when faced with this limitation, I was captivated by the possibility of blending the wonders of the world of Pokémon with the beauty of our own world. Although I enjoyed taking occasional serendipitous photos of Pokémon that spawned on my daily walks, it wasn’t until the introduction of Research Breakthroughs to the game that I was able to take pictures I was truly proud of.

Wanting to recreate iconic moments from the main-series games, I patiently waited until I was in the perfect spot on a mountaintop in Hawaii—one that looked just like how I imagined Mount Ember from Pokémon FireRed and LeafGreen would look in the real world—to claim my Research Breakthrough and trigger an encounter with Moltres. After taking several less-than-stellar photos of the Legendary Bird attacking, I was finally able to snap the perfect shot. Once I returned home, I carefully planned and traveled across the city to take pictures of Zapdos by a local power plant and Articuno over the water, recreating childhood memories of Kanto’s Power Plant and Route 20 in the process.

AR photography has come a long way since then. We can now take photos of any Pokémon we want, wherever we want, whenever we want. The photo resolution is dramatically better than it was when the feature first launched. We can even take group photos with our friends. Still, there’s still something magical about those early, blurry photos of wild Pokémon with our usernames overlaid on them. I’m so incredibly proud of this set of photos, and am thrilled to finally be sharing them with the Pokémon GO community!’

‘Enjoy the beauty of transparent feathers.’

Shaymin excitedly ran down the slope of colored leaves.’

‘On my days off I like to start my day by taking my partner Articuno to the beach. It loves to ride to air flows by the cliff and smells the sea. What a majestic start to a day.’

‘Buzzwole in The Krimml Falls Forests’ by PoGoMiloUKYT, Austria.

‘My Hundo Buzzwole (remoted from the land down under) came with me on my tour of central Europe, back in September 2022. But I think it was most “at home” in the forests surrounding The Krimml Falls in Austria. The hot, humid day amongst the tall trees and with the overspray of the Krimml Falls. Perfect conditions for a buff Mosquito! Poffined and it was happy.’

‘The island guardian, Tapu Fini, is said to be the hand of calamity. All those who approach it ignorantly do so to their demise. Now, it’s tranquil repose is threatened with greater disaster due to pollution, bottling, and a more dry climate.’

‘Amongst the leaves’ by Geomitron, Mount Burr, South Australia.

‘Zapdos enjoying the changing of the seasons!’

‘Shiny Lugia roars and soars high above the city of Seattle, WA and past its Space Needle!’ 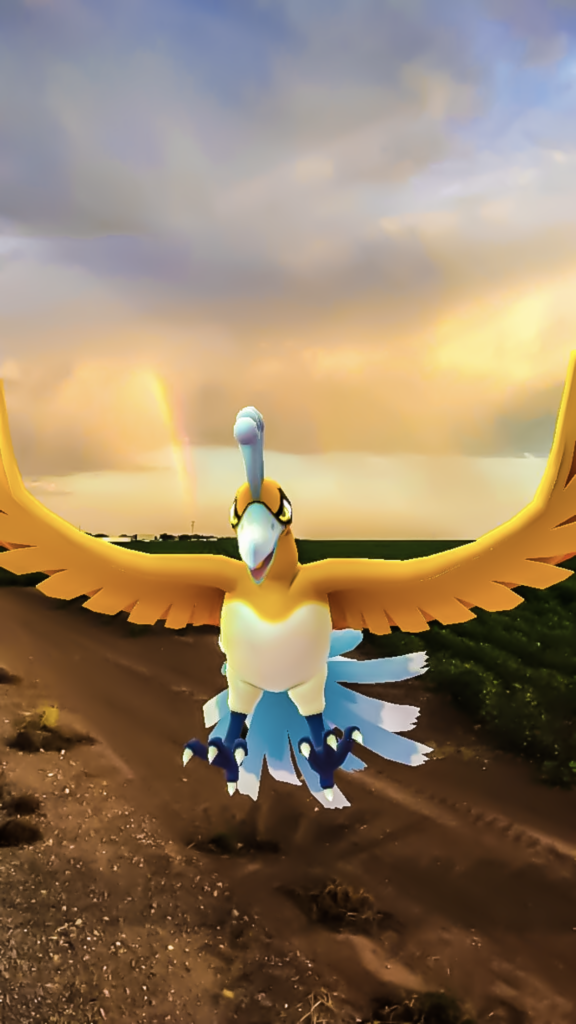 ‘Ho-Oh’s feathers are said to grant happiness to those who hold it. Luckily there was a rainbow nearby so I knew I could find it, who would’ve thought it would be shiny!’

‘As you call forth the Pokémon you just caught, you realize your life’s ambition is now within your grasp: world domination. All Pokémon will now be forced to bend to your power. You, Giovanni, now own the most powerful Pokémon created!’

‘The monster under the decks’ by ElKhan32, Essex, UK.

‘While on a morning walk I strolled under the local pier. Here I heard a grinding of rocks. Strange. I turn to find this mighty creature standing near me. ‘

‘The legend of the guardians is sown into lore. The great protectors of our realm. I hope this photo shows it in its true majesty.’

‘Ultra Beast out in the fields.’ by Lonerider0009, Hyderabad/ Telangana/ India.

‘Hunting down the the beast in the fields.’

‘Solgaleo and Lunala are helping to usher in the Christmas season by powering the lights with their mysterious energy.’

‘Shiny Ho-Oh makes its presence known after a storm, leaving behind a rainbow!’

‘Articuno is my favourite of the Gen 1 birds and the Galarian version is no exception. It’s so graceful twirling in the sky. I hope I’ve captured a sense of the motion in this picture’

‘Lugia is such a huge bird, it’s hard to capture it all in frame so I decided to concentrate on the shadow aura and enhance that.’

‘There is something so disconcerting about the designs of the Ultra Beasts. They push the boundaries of what we think of as Pokémon, taking inspiration not from the natural world, but from technology, and come from Ultra Space. Something in Xurkitree’s design is so creepy, whether it is the pulsing electric coursing through it’s body, it being made from what appears to be cabling, zip ties and copper, or it’s lack of a facial features, it shouldn’t be alive, and yet it is. Coming in at a whopping 12ft 6, you wouldn’t want to come across this Pokémon alone!

This photo was recently used by Pokémon GO themselves as part of an official infographic in the run up to the Ultra Beast Arrival event announcement, so it now has really special meaning to me. I’ve always posted my photos online and used the hashtags etc when there have been competitions, but never been acknowledged or shared, so for it to happen with this photo that was so tricky to take, was so exciting!’

As is traditional for December, we have our annual Winter themed AR showcase! Show us your best themed winter AR images, featuring any Pokémon you like. Submit by 20th December to be considered, full rules at the submission form here.