Trainers, this is a friendly public service announcement for all Android users to proceed with caution while playing in the GO Battle League on the current 0.255.1 and the previous 0.255.0 patch as there is a game-breaking bug that causes freezes and even a complete app crash during battles.

This issue has been happening for over a week now. The crash can happen at any time and is unpredictable. Some games will be fine and others will be a nightmare. From what we know, this issue is only happening to Android users, iOS users are not affected by this.

There has been mass outrage online with people reporting their incidents of this bug on social media. Players have stated that a game was in their favour and about to win when suddenly their app becomes unresponsive. After resetting their app, they are granted a ‘Good Effort!’ message, just to rub salt into the wound.

Battlers are even stating that until this issue is fixed, they will not be participating in GO Battle League, which is fair enough since players are losing ELO from it. Even community leaders are outraged by this issue and are vocalising their stand against a lack of engagement and disregard for this bug.

Trainers that have been affected by this issue have even sent support tickets to Niantic and received this response: 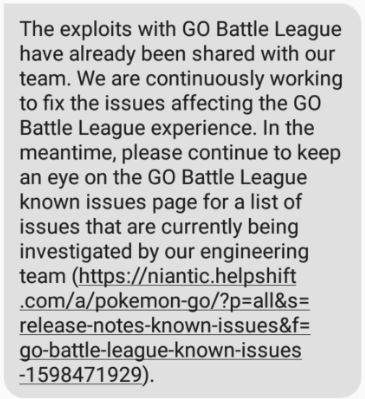 From what we can see, Niantic is aware of this bug, however, we hope that this issue gets resolved ASAP as it is not only causing a decrease in player activity, but also the fact that Season 13 is only days away.

While we have had other issues involving lag, inconsistencies and other inconvenient bugs, this one has to be up there for one of the worst since there’s pretty much no way around it and 9 times out of 10, will result in a loss for the affected user.

To make things worse, there are also reports of players running into another bug with this latest patch which involves the ‘Finding Opponent’ screen becoming unresponsive, players can not even back out of that screen as the button and other texts are missing completely. The only way to resolve this is to force close the app and restart it.

We’re hoping that with your help on social media and with the exposure of this article, we can have our voices heard so that this becomes a number-one priority for Niantic.

While we do understand that bugs and issues happen, there must be a quicker awareness and response time in resolving issues such as this in the future.