When trainers in the main series games first encountered Snorlax on route 12, the very large Pokémon was sleeping and blocking the way through.

Intrepid trainers needed to go obtain a Pokéflute to wake the Snorlax up.  This is when I fell in love with Snorlax, I mean a Pokémon that loves food and sleep?  What’s not to love!

Let’s take a deep dive into what makes Snorlax, Snorlax.

Snorlax was inspired by a real person!  In a 2018 interview with Japanese site Yomiuri, Pokémon art director Ken Sugimori revealed that Snorlax is actually based on Pokémon planner Koji Nishino.

Sugimori said “(Nishino), with this (huge) appearance, was the model for the Snorlax Pokémon. However, it is abnormally demanding with adorable things.”

Snorlax’s Japanese name, Kabigon, also has ties to Koji Nishino as well.  Kabi means mould in Japanese, and Kabigon was Nishino’s nickname which is a reference to Nishino eating food that had become mouldy. 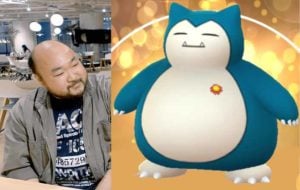 Koji Nishino and Snorlax, can you see the resemblance?

Snorlax is known as the Sleeping Pokémon.  Standing 2.11 meters (6’11”) tall, and weighing in at a massive 460 kilograms (1014.1 lbs) Snorlax is an extremely large and imposing Pokémon.  Snorlax has claws on its hands, which are fairly short given its size.  They are long enough to grab food and put it in its mouth though, that mouth has two small canine teeth visibly protruding from its lower jaw.

Snorlax has very large feet which supports its enormous weight when it does eventually stand up.

Snorlax’s eyes are almost always closed, giving trainers the impression that it’s sleeping.  Be wary when approaching a Snorlax, while chances are that it is sleeping… it might not be!

Snorlax is a greyish-blue colour, an apricot-colour underbelly while shiny Snorlax is a darker blue than the original blueish-grey colour.

Gigantimax Snorlax, not yet available in Pokémon Go, its belly becomes overgrown with plants and a large tree forcing Snorlax to lie on its back.

Snorlax is famous for its sluggish, relaxed nature.  It will sleep for hours on end only waking up because it’s hungry, and when it does wake up it will forage for upwards of 400 kilograms (880 pounds) of food before falling back asleep again.

This behaviour also interferes with human farming, as Snorlax is known to devour entire fields of crops in its attempt to satiate its almost insatiable appetite.  That said, Snorlax is believed to release a special kind of energy that helps plants regrow after it has eaten them.

When in the wild, Snorlax will be mostly indifferent and ignore most people around it while it’s foraging, eating, or sleeping.  However, Snorlax is known to be very affectionate towards its trainer after it’s caught. 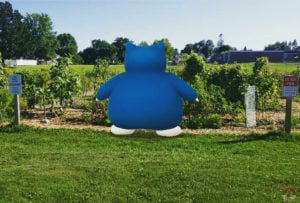 Snorlax standing beside a community fruit and vegetable garden.

Snorlax owns one of the biggest Stamina stats in the game, with a massive 330.  An attack stat of 190 isn’t terrible. 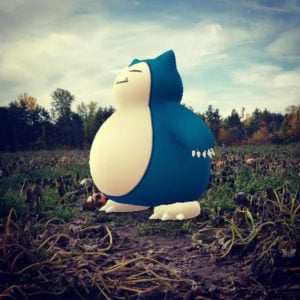 Snorlax standing in a pumpkin patch

I hope you’ve enjoyed reading this look into what makes Snorlax one of the most popular Pokémon and my personal favourite as much as I’ve enjoyed putting it together.

Until next time trainers, stay safe out there.

More details are announced for The Pokémon Company's upcoming...