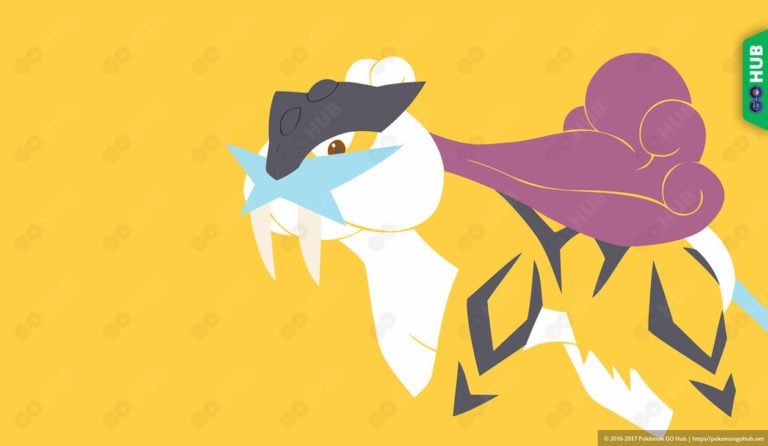 Raikou is simply one of the best attackers in the game. Raikou’s best moveset is also one of the most powerful Electric sets in the game — Thunder Shock and Wild Charge — and it also has enough bulk to make it a good generalist Pokemon. Raikou was initially designed to be a bulkier and less damaging version of Zapdos, but because Zapdos got Zap Cannon instead of Wild Charge, it was enough to make Raikou more powerful, while also being bulkier.

Though only two types are weak against Electric, which are Water and Flying, those two types are common enough for Raikou to see usage. Water type is the second most common type for defenders, with notable Pokemon such as Wailord, Gyarados, Vaporeon, Lapras, Walrein, and Slowbro, with Gyarados even having double weakness to Electric type. As for Flying, it is one of the more common type for Legendary Pokemon, granted most of those Pokemon have a second type that resists Electric as well.

Unfortunately, Raikou was only available for a limited time, and like most Legendary Pokemon, you’ll most likely need Rare Candies to power it up, but other Electric types like Jolteon pale in comparison with Raikou’s raw strength that it’s definitely worth the candies and dust. Good thing, like the Legendary Birds, Raikou returns as a Research Breakthrough as well.

The current top Electric Pokemon only consists of Raikou, Zapdos, Jolteon, and Ampharos, and some might argue even Lanturn or Electabuzz. Raikou clearly stands out by being both stronger and bulkier, even if Zapdos technically has a higher Attack stat.

However, its main weaknesses should be mentioned too:

In reality, there is no such thing as a bad Raikou Pokémon GO moveset. However, some movesets are more viable or commonly used than others. The following Table compares the cycle DPS (with STAB) of every single moveset that Raikou is able to learn. Keep in mind that some movesets might not top the DPS charts but could be good to use in certain scenarios!

Groudon is the best Ground type attacker in the game. It has a massive 270 Attack and a beefy bulk of 251 Defense and 182 Stamina. It can totally shutdown Raikou with its Electric resistance and STAB super-effective Ground Moves. Even Solar Beam does well vs Raikou.

Rhydon and Golem also does well against Raikou for the same reason. Even if they are a notch weaker than Groudon, it’s not to say they’re bad against Raikou. Their immunity to Electric and STAB super-effective Ground moves can still obliterate Raikou. You can actually use them if you plan on saving Groudon for another opponent.

Flygon has the distinction of having an immunity AND resistance to Electric moves, lowering Raikou’s damage output to 43.7%, even with STAB, while also returning super-effective STAB damage. Even with its subpar offenses and bulk, it is more effective than using Golem on a Time-to-Win standpoint.

Raikou’s exploitable Ground weakness is so bad, even low tier Ground types are viable. This means Sandslash, Donphan, and Nidoking are valid counters against Raikou when you don’t have access to the supreme counters.

Latios and Alolan Exeggutor are fully-evolved Dragon types that resist Electric types successfully, with Alolan Exeggutor having double resistance because of its Grass typing. Use their best DPS moveset when fighting against Raikou. Speaking of Grass, you can use your best Grass attackers like Venusaur and Regular Exeggutor for their resistance to Electric moves

Still, it’s natural power, decent bulk, and great offensive and defensive typing makes it one of the best Generalist in the game. Because it only has a single Ground type weakness, there are only a few situation in which it does not take super effective damage from the Legendary Raid Boss. Notable Legendary Raid Bosses where you can use Raikou as an attacker are:

Other than Ground types, you should stay away from Raid Bosses that does resist Electric type moves like Latios and Latias, unless it has a secondary type that is weak to Electric typing like Zapdos and Rayquaza. There are better counters for the raid bosses listed above, but Raikou can easily fit an empty slot in your offensive line-up because it has maneuverability to dodge Charge Moves. Give it a chance if you don’t have better specialist Pokémon for a specific matchup!

Raikou is the best Electric type attacker and a great Generalist Pokemon. It’s moves Thunder Shock and Wild Charge is both best DPS wise and maneuverability, making it a good attacker that can easily dodge Charge Moves. Being only weak to Ground gives it a lot of neutral matchups. It’s lone weakness might be easily exploitable, but since it can’t be a defender given its status as a Legendary Pokemon, it’s less likely to be used in a situation where it can be beaten.