While Noibat may have already been released as a shiny, it is a rare one, and takes a whopping 400 candy to evolve, so this event is well worth grinding! 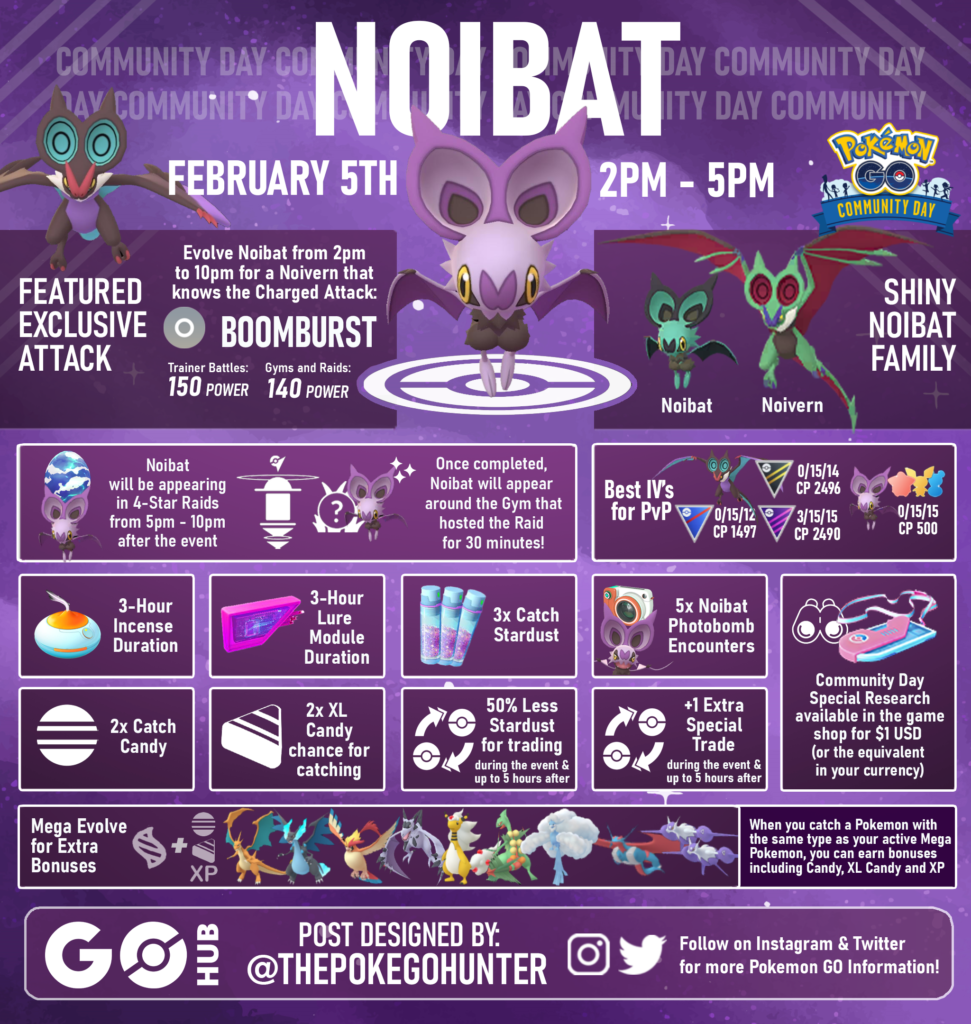 Noibat will appear more frequently in the wild. You’ll be able to encounter Shiny Noibat—if you’re lucky! Noibat is a Flying and Dragon type Pokémon, so Windy weather will weather boost your spawns.

Evolve Noibat during the event or up to five hours afterward to get a Noivern that knows the Normal type Charged Attack Boomburst.

*While most bonuses are only active during the three hours of the event, these bonuses will be active from 2:00 p.m. to 10:00 p.m. local time.

How to evolve Noibat?

Noibat can be encountered as a weather boosted spawn. Noibat is boosted by Windy weather. Bold indicates Pokémon level in the wild. Levels up to 30 available in the wild, 30-35 only with weather boost.

After the three-hour Community Day event ends, Trainers will be able to take on special four-star Raid Battles featuring Noibat. Defeating one of these raids will cause more Noibat to appear around the Gym that hosted the raid for 30 minutes! Check out our raid guide for the best way to defeat these raids.

Once you successfully complete a four-star Raid Battle against Noibat, Noibat will appear around the Gym that hosted the raid for 30 minutes. If you’re lucky, you may encounter a Shiny one! (*)

(*) Noibat that appear under these circumstances will have the same chance of appearing as a Shiny Pokémon as those that appear during February Community Day’s three-hour event period.

For US$1.00 (or the equivalent pricing tier in your local currency), you’ll be able to access the Noibat Community Day–exclusive Special Research story, Abundant Noise. You’ll be able to purchase this for yourself, and send it as a gift to a pal!

You’ll be able to get event-themed stickers by spinning PokéStops, opening Gifts, and purchasing them from the in-game shop.